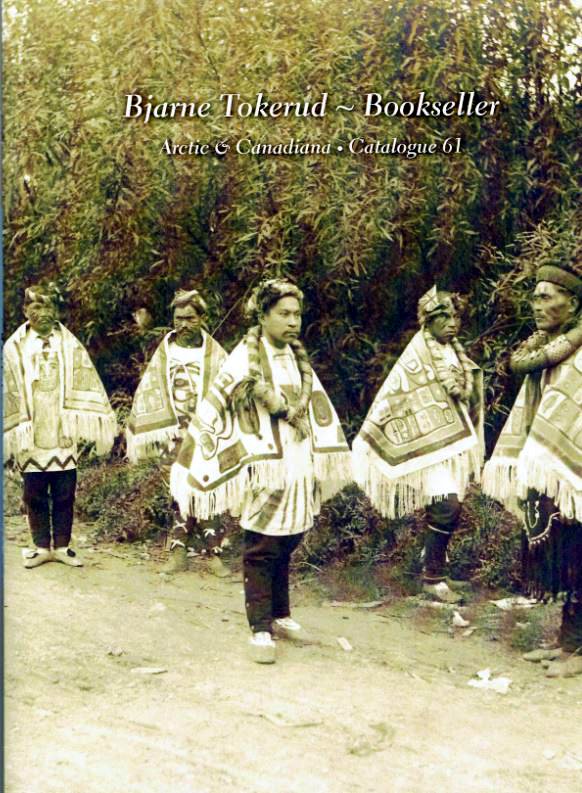 Bjarne Tokerud Bookseller is offering Arctic & Canadiana – Catalogue 61. We go off to a land where an underlying theme of so many of the books is... cold. It's cold up there. However, frigid climate is combined with other topics in these books – travel, adventure, discovery, gold. People travel to or live in these climates for reasons other than wanting to be cold, and this catalogue fills in the reasons that draw people to lands where the meek do not go. The catalogue concludes with a section that includes “other subjects,” with a few items that take us below the southern border of Canada. Here are a few books from this new catalogue.

We start with one of the most important travels inside the North American continent, the two expeditions of Alexander Mackenzie. They are described in his book Voyages from Montreal, on the River St. Laurence, through the Continent of North America, to the Frozen and Pacific Oceans; In the Years 1789 and 1793. For Americans, Lewis and Clark's travels from 1804-1806, which took them all the way to Pacific, is the most important internal expedition. However, it was Mackenzie who first made the trip all the way to the Pacific across the North American continent (north of Mexico). The reason it took Mackenzie two trips is the first time he missed his target. He found a river, now named for him, and followed it to its end. It turned out it exited into the “Frozen,” or Arctic Ocean. The second time, he followed a group of rivers and overland passes until he finally reached the Bella Coola River in today's British Columbia, which ended at the Pacific. Lewis would read this book, which was published in 1801, before attempting his own overland trip. Item 32. Priced at CN $6,000 (prices are quoted in Canadian dollars – U.S. equivalents at current exchange rates are about 10% less).

This next book doesn't cover an official expedition, but an amazing journey in northern Canada during the late 19th century nevertheless. The title is Across the Sub-Arctics of Canada: A Journey of 3200 Miles by Canoe and Snowshoe through the Barren Lands, published in 1897. Author James Tyrell and his brother Joseph undertook this journey through the unexplored territory between Great Slave Lake and Hudson Bay in the summer of 1893. They traveled from Black Lake in northern Saskatchewan along a route of lakes and rivers heading northeast as given them by natives. That eventually would lead them to a large river whose terminus was unknown. The brothers figured there were only two possibilities – it either ended in the Arctic Ocean or in Hudson Bay. They followed it. It turns out it was the Dubawnt River, over 500 miles long, which eventually took them to Chesterfield Inlet on the northwest coast of Hudson Bay. From there, they followed the bay's coastline to Churchill and snowshoed from there to Winnipeg. As Tokerud notes, their journey was “an example of exceptional stamina, and a great achievement.” Item 56. $450.

Item 138 is from the dawn of railroading:  Map of Upper Canada Shewing the Proposed Routes of Rail Roads, for the Purpose of Extending the Trade of the Province, by Sir John Smyth. First, a little housekeeping for Americans. We always get confused between Upper and Lower Canada, since all of Canada is “upper” to us. Additionally, most of Lower Canada is father up than Upper Canada. Lower Canada is mostly Quebec and the Atlantic provinces, while Upper Canada is Ontario and the Great Lakes region. It is only upper in the sense of farther inland from the Atlantic Ocean. This map was published in 1837, and Smyth laid out proposed rail lines that would connect Toronto and Montreal to New York, the Mississippi, the Rocky Mountains and eventually the Columbia River. He foresaw trade from the west coast to China and India. According to Streeter, Sir John gave himself that title. $2,250.

Here's a title that appears a bit of a head-scratcher:  Farming and ranching in the Canadian North-West: General account of Manitoba and the North-West Territories: Superior advantages for agricultural settlers: Unrivalled ranching districts: Free grants and cheap lands, and how to get them: Climate and health... Farming in the Northwest Territories? What is the growing season? A week? Ranching polar bears? The Northwest Territories begin 750 miles north of the northernmost parts of North Dakota and Minnesota. This publication was created by the Canadian Pacific Railway in 1889, and they had an interest in people settling and farming these lands – more produce to ship by rail, as there would have been no other way in 1889. It contains testimonials from settlers as to the richness of the soil, adaptability to farming and ranching, and health-giving climate (seriously). Item 66. $475.

Item 132 is Souvenir:  New Westminster Bridge, Official Opening. July 23rd, 1904. This bridge crosses the Fraser River at New Westminster, just east of Vancouver in British Columbia. It relieved a bottleneck to transportation. It was primarily a railroad bridge, but was constructed as a double-decker, leaving lanes for walking above. $65.