American (and a few other) Maps from High Ridge Books 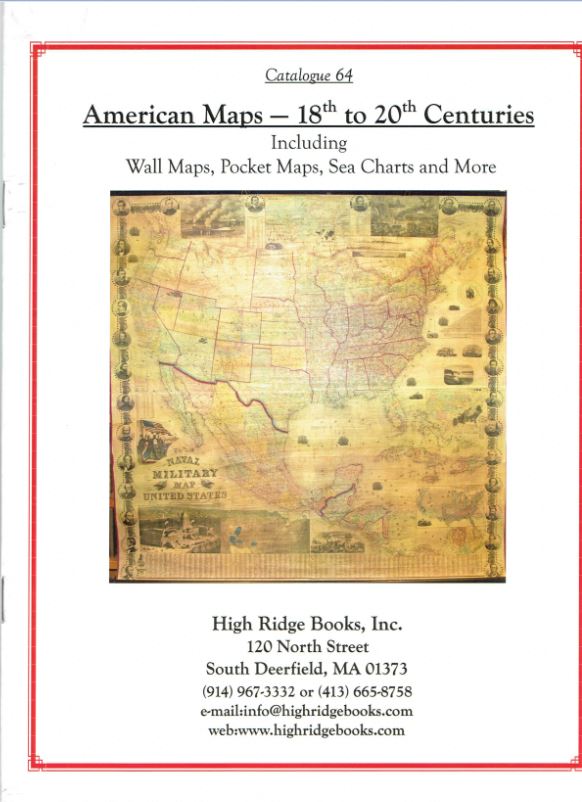 High Ridge Books, of South Deerfield, Massachusetts, has released Catalogue 64. American Maps - 18th to 20th Centuries, Including Wall Maps, Pocket Maps, Sea Charts and More. These are primarily American maps, though Latin America, Canada, England, Europe, even Japan and Australia make an appearance. State and regional maps are common, but many cover much smaller localities, - counties, cities, and small towns. The maps are presented chronologically, starting with 1700. It ends 294 items later in 1940, though only a handful come from the 20th century. Most are from the 19th century, and as a result, railroad tracks are most often the routes displayed. That was the century that started with only water routes and rough carriage roads and ended with hundreds of railroads reaching every major city and very many rural towns as well. The 20th was the century of automobile roads, but only a couple of maps at the end display routes meant for cars. Some of these maps come from atlases or other books, but many were published as stand alone pieces, often folding maps meant for travelers, or wall maps. Here are a few of the maps to be found in this fascinating collection.

We will start with the very rare second state of a map that has achieved recognition as the first map to call the new American nation the “United States.” The first state was published with the name in 1778, while this second state comes from 1781. Now this map doesn't spell it out “United States” because it was written in French, using the French equivalent - “Etats Unis.” The title is Carte du Theatre de la Guerre actual entre les Anglais et les Trieze Colonies de l'Amerique Septrionale... That translates to “map of the theater of war between the English and the thirteen colonies of North America.” Note it says “colonies” rather than “states” as was often used at the time. However, it also describes the map's creator, J. B. Eliot, as an “Engineer of the United States,” and that is the first appearance of the new nation's correct name. Of course, the British did not recognize it as an independent nation at the time, but the French did, so it is not surprising that this first such map was printed in Paris. It is a map of the war, with events starting from Bunker Hill, and continuing until later than did the map's first state since it was updated prior to the second printing. Not on the map, but added in manuscript, is a notation about the surrender of Cornwallis at “York river.” Item 11. Priced at $18,500.

Item 34 is an interesting map, of sorts:  Comparative View of the Heights of the Principle Mountains, &c in the World. This issue is attributed to H. Morse, but is also described as a “first American” edition taken from the “last English,” which makes it appear that Morse borrowed the earlier work. It is a print in the format of a wall map, but it displays various mountain ranges from around the world in scale, so one can compare the heights of the mountains. Nearly 200 mountains are depicted. $2,350.

Item 107 is the 1845 edition of the Map of the World on Mercator's Projection, by S. Augustus Mitchell, published in Philadelphia. For whatever reason, the map includes an inset of New South Wales. There are a couple of interesting features in North America which apply specifically to this time. One pertains to Texas. It is shown as an independent nation. That existed for only a dozen years, though not everyone (Mexico in particular) recognized that independent status. The other shows Oregon extending as far north as 54” 40'. This latitude forms what was the boundary between Oregon and Russian Alaska by treaty between Britain and Russia. The bigger question was who owned Oregon, as both the United States and England claimed ownership. There were voices in America calling for the nation to go to war with England over Oregon all the way north to 54” 40', but President Polk was more intent on expanding into Mexican territory and did not want to start two wars at once. As a result, England and America finally agreed on a boundary at the 49th parallel, leaving England with what is now British Columbia. $3,750.

This next map is notable for the unusual names as well as borders. Item 177 is the Johnson & Browning New Illustrated & Embellished...Map of the Republic, dated 1860. It shows a proposed “State of Jefferson or Colona” for what is today Colorado. Residents of the area had actually claimed the area as the Territory of Jefferson, carved out primarily from western Kansas, after the Gold Rush began. However, the U.S. never recognized it. Once the Kansas Territory, east of the current eastern border of Colorado, was granted admittance to the Union as a free state after the beginning of the Civil War, the land was officially declared the Territory of Colorado, becoming a state in 1876. The map also shows a territory of Shoshone in what is today southern Idaho and western Wyoming, and an east-west, rather than north-south, border between New Mexico and Arizona. $7,500.

The item you see on the catalogue's cover is a Civil War era map, circa 1862, The New Naval and Military Map of the United States, by J. Calvin Smith. This is a patriotic Union map, featuring three battle scenes and a panoramic view of Washington. Around the borders are portraits of various Union military leaders, President Lincoln and his cabinet. Offered is a rare second state of the map which added to the number of portraits. This map also features one of the earliest appearances of Idaho, which includes all of the current state plus parts of Wyoming and Montana. Item 190. $8,750.