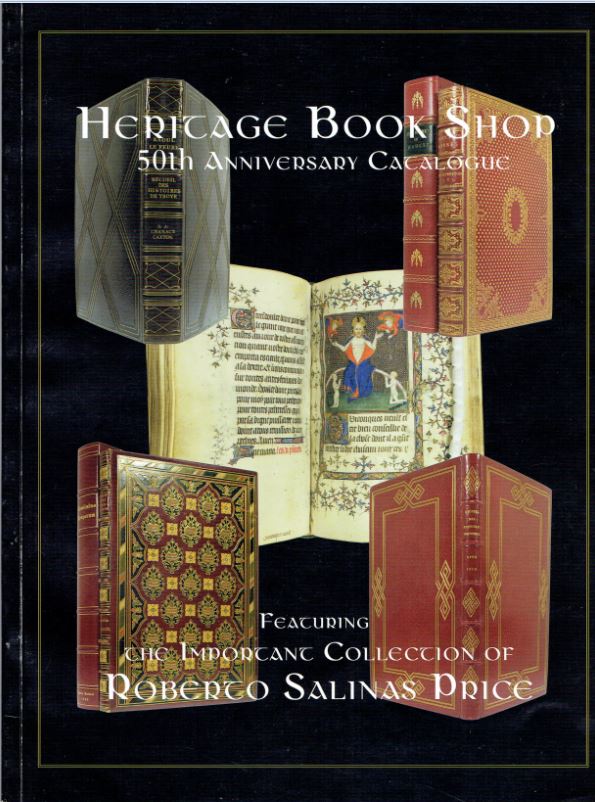 The Heritage Book Shop of Beverly Hills has issued its 50th Anniversary Catalogue, Featuring the Important Collection of Roberto Salinas Price. For a bookshop to reach a 50th anniversary is very rare. For one to reach that milestone still under its original ownership is virtually unheard of. The shop was founded by its owner, Ben Weinstein, and his brother half a century ago. After many years at an iconic location on Melrose Avenue in West Hollywood (various other Los Angeles area locations prior to that), Heritage migrated to its current address in Beverly Hills.

The collector whose books are being offered, Roberto Salinas Price, was also involved with books for many years, building his library over a course of 30 years. Mr. Salinas Price, a Mexican businessman, died in 2012. His collection, which he called Biblioteca Huicalco (root library), was devoted to the most important books of western thought and the history of printing. This catalogue contains just over 100 items, and they are all of historic significance. This was an important library of our roots. Here are a few samples.

There is certainly no better place to start a history of printing than here: A Noble Fragment. Being a Leaf of the Gutenberg Bible, 1450-1455. With a Bibliographical Essay by A. Edward Newton. Gutenberg Bibles were essentially unobtainable even a century ago when New York bookseller Gabriel Wells decided to break up an imperfect copy he had obtained. Six hundred copies of his book were printed, each including a Gutenberg leaf. Wells brought in Bruce Rogers to design the book, and A. Edward Newton to write a descriptive essay. This leaf comes from the Book of Numbers, and contains (translated from the Latin) the familiar phrase, “The Lord bless thee, and keep thee.” Item 10. Priced at $100,000.

For those interested in everything that ever happened before Gutenberg, and a few decades later, it is all found in Liber Chronicarum, better known as the Nuremberg Chronicle. This book starts from creation, Adam and Eve, and moves through the biblical times of Noah and others, on to antiquarian times, ancient Greece and Rome, and right up to the present, which at the time this book was published was 1493. It was a hair too soon for Columbus and the New World. Author Hartman Schedel was concerned that previous histories did not show proper respect for Nuremberg, his hometown and printing location, which he sought to correct. The book contains 1,809 woodcut illustrations, although 1,164 are repeats. This copy contains the double-page maps of Europe and the world, and the image of Pope Joan, usually blotted out, has not been effaced. Item 87. $150,000.

This is the book that consigned poor Galileo to house arrest for the remainder of his life: Dialogo... Galileo wished to teach the heliocentric Copernican theory of the universe, that the sun, not the earth, was at its center. The Pope refused him permission, but when a new, more open-minded pope arose, approval was granted. However, the Pope demanded that Galileo give equal consideration to the traditional, Ptolemaic world view. Galileo complied by presenting the positions in the form of a dialogue. Still, the way it was presented left little doubt as to which Galileo thought was correct. The Pope was not amused. Galileo was hauled before the Inquisition, forced to recant, and placed under house arrest. But he was right, anyway. Item 38, published in 1632. $95,000.

For those who think Galileo was controversial, this next author stirred up a hornet's nest that rages to this day. It was hard enough accepting we are not at the center of the universe. Believing we descended from monkeys was too much. Item 28 is Charles Darwin's On the Origin of Species by Means of Natural Selection... published in 1859. Darwin had traveled to South America in the 1830's, and observed the similarities and differences between species on the mainland and outlying islands. It led him to his earthshaking conclusion, that evolution of the species explained the difference. He sat on this theory for nearly two decades, realizing how controversial it would be, but once Alfred Russel Wallace independently reached very similar conclusions, he was forced to publish his theory. $160,000.

Darwin never used that controversial word, “evolution,” in that work. He would first use it a decade later, in describing The Descent of Man... This book was published in 1871, and future editions of the Origin would then incorporate the term. Item 26. $8,500.

As Darwin's thoughts on man were not universally accepted, so were John Stuart Mill's on women. Item 71 is Mill's The Subjection of Women, published in 1869. Mill, a strong proponent of liberty, believed women were entitled to the same rights. Contrary to claims that women were happy in their subjugated role, Mill thought women might believe they were happy, but if ever given equal rights, they would never return to their previous state. He argues, “That the principle which regulates the existing social relations between the two sexes – the legal subordination of one sex to the other – is wrong in itself, and now one of the chief hindrances to human improvement; and that it ought to be replaced by a principle of perfect equality...” It took a while longer. $4,500.