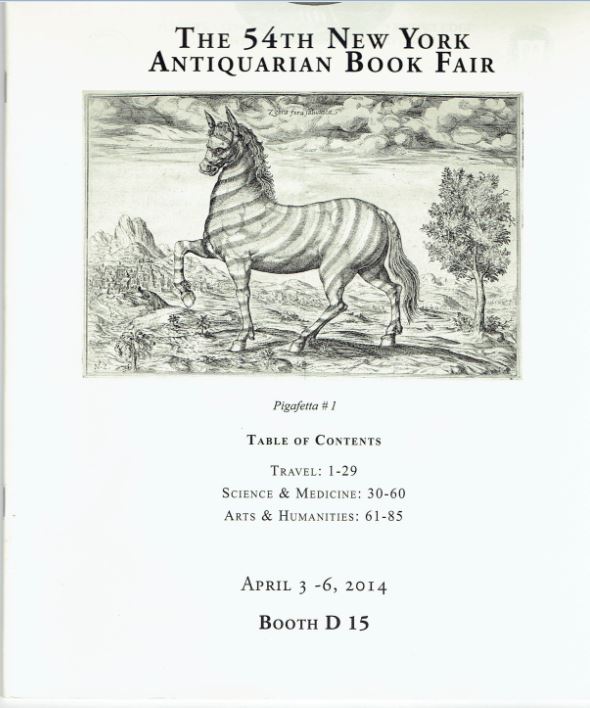 Martayan Lan provided a catalogue for The 54th New York Antiquarian Book Fair, held last month. Martayan Lan is a map specialist, but this presentation includes many books, some containing maps, others not. It is divided into sections. The first, Travel, includes many atlases and maps. The other two sections cover Science & Medicine, and Arts & Humanities. These are important works, suitable for collections at the highest level. Here are a few examples.

The image of the unusually striped zebra you see on the cover comes from a very early trip inside the African continent. Relatione del reame di Congo et delle circonvicine contrade is an account by Filippo Pigafetta of the explorations of the Kingdom of the Kongo in 1578-1584 by Odoardo Lopes (first name sometimes written as Duarte or Edward, last name as Lopez). Martayan Lan notes that Lopes' knowledge of interior Africa would not be surpassed until the days of Stanley and Livingston, almost three centuries later. Pigafetta's account is a mix of fact and fiction, treating rumors, reports recounted by Africans, and ancient tales similar to eyewitness accounts. Nonetheless, considering all of the fantastic rumors and imagined creatures Europeans believed about inland Africa at the time, this presented a far more realistic view. Lopes believed the natives could be converted to Christianity, so they are portrayed more realistically as humans than as some fantastic creatures. This 1591 first edition contains the folding maps and plates, which provided the first updated representation of the land since the days of Ptolemy. Item 1. Priced at $49,500.

There is not a more foundational piece for a collection of Americana, except perhaps a Columbus letter, than this work: Cosmographiae Introducto... by Martin Waldseemuller. This is the St. Die edition, one of four published within four months of each other in 1507. All are extremely rare. The book includes the first collected edition of Amerigo Vespucci's four voyages. It was in this book that America received its name. It was the first time the name “America” appeared in print, as Waldseemuller stated that there was no way it should be named anything else since Amerigo Vespucci had discovered it. It is interesting that in his 1513 map, Waldseemuller labeled America as the “New World,” not “America,” perhaps because he had learned in the intervening years that it was not Vespucci who discovered the land after all. Item 29. Price on request.

Halfway into the 16th century, Sebastian Munster produced one of the greatest atlases of his time. Only a few decades after Waldseemuller, and not much more after Columbus, item 19 is Munster's Cosmographiae Universalis, published in 1552. The world had changed enormously. Munster provided the first separate printed maps of Asia and the Western Hemisphere. The greatest advancement in knowledge came in the Americas, where all Waldseemuller knew was an edge of the continents and a few islands. Munster's Americas still feature many misconceptions. A massive southern continent lies just a narrow strait south of South America, India is not all that far west of North America, Japan is a huge island not far from the west coast, and a great inland waterway almost divides North America in half. Nonetheless, for all the defects in his understanding, Munster's map of the Western Hemisphere is complete and clearly recognizable as the Americas. $75,000.

Item 51 is Sir Isaac Newton's pioneering work on Opticks. It was his most important work other than the Principia, and like that book, Newton not only looked to describe what he saw, but explain why. His most notable discovery was that white light was composed of all of the colors of the rainbow. This is a first edition from 1704, and unlike his other great work, this first was written in English. Newton had written this book several decades earlier, but because of heavy criticism from fellow scientist Robert Hooke, he delayed until after Hooke's death in 1703 to print it. $140,000.

Item 85 is a biography of a woman way ahead of her time, L'Eroina Veneta, Overo la Vita di Elena Lucretia Cornara Piscopia... by Antonio Lupus. Elena Cornaro Piscopia was a brilliant woman, so learned that she obtained a doctorate and numerous other honors during the 17th century, a time long before the acceptance of women in anything other than a domestic role. Though her mother was a peasant unmarried to her father, her father was of Venetian nobility. That was sufficient to get her an education. By the age of seven, she was proficient in Latin and Greek, which would lead her to the study of several more languages, mathematics, philosophy, and theology. Her tutor recommended her to the University of Padua for a doctorate in theology, which the local Bishop refused, but she was allowed to obtain a doctorate in philosophy. Numerous Venetian senators and representatives of other universities attended her award. Sadly, she died in 1684 at the age of 38 of tuberculosis. Her writings were published posthumously in 1688 and this biography in 1689. $2,850.