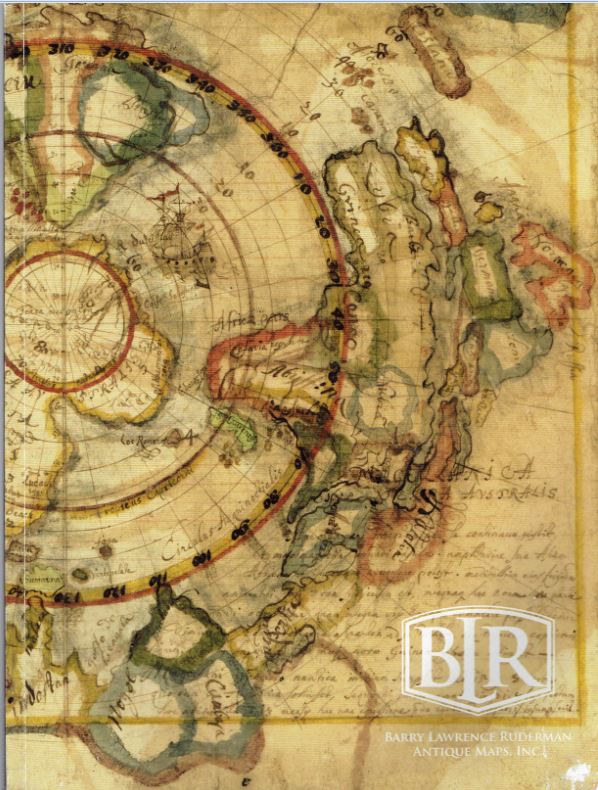 Barry Lawrence Ruderman Antique Maps presents a wonderful collection of printed and manuscript maps in their Catalog 4. It is filled with rare, historic, and important maps. While the greatest concentration is from America, as in today's United States of, it extends to Latin America, a few from Asia, Australia, Europe, and the world. Here are a few samples of what you will find.

We start with a trip back in time to when the world was much younger, and much less well known. Item 1 is Hemispherium ab Aequinoctiali Linea... a map of the world produced by Cornelis de Jode in 1573. This is one of the earliest maps depicting the world from twin polar hemispheric projections. These maps display a combination of knowledge and lack thereof. Only a century after Columbus, large areas of the world remained only vaguely understood. As the Spanish and Portuguese, two major exploring nations of the 16th century, attempted to hide their knowledge for competitive advantage and security, mapmakers had limited resources from which to draw. Asia and North America are shown as separated by only a narrow strait, the “Strait of Anian,” rather than a wide ocean. Japan is situated just off the American coast. The Arctic is composed of four segments, one of which connects to Asia, making a northeast passage impossible. The mouth of the St. Lawrence River is as wide as the distance between Asia and America. The mythical cities of Quivira and Civola are found in California. Sumatra is labeled with Sri Lanka's ancient name, though an island at the appropriate place for this nation is shown. In the southern hemisphere, only a narrow strait divides South America from the mythical enormous southern continent, Terra Australis. That continent extends even farther north on the other side of the globe, reaching into the Indonesian archipelago, subsuming Australia. Priced at $59,500.

Item 2 is one of only two known copies of a prototype of the 1593 de Jode map above, circa 1587. This copy was only discovered in 2009. It may originally have been created to provide polar view insets on de Jode's large wall map of the world, now lost. $125,000.

Item 7 is a most interesting battle map, The Attack and Defeat of the American Fleet under Benedict Arnold, by the Kings Fleet Commanded by Captn Thos. Pringle, upon Lake Champlain, the 11th of October 1776. This map was published by William Faden of London on Dec. 3, 1776. That title is filled with irony. Of course, the most obvious is that Benedict Arnold, later a turncoat to the British, was commanding the American fleet. He was a hero before he was a traitor. The use of the word “defeat,” while technically true, did not really describe the results of the Battle of Valcour Island. The British overwhelmed Arnold's smaller force, but the latter managed to delay their advance. The weather had already turned colder, with snow in the air by this time. British General Carleton concluded it was too late in the season to maintain his supply lines to Quebec, so the plan to push on to the Hudson River and divide America between New England and the South would have to wait another year. Had the British been able to complete the plan in 1776, the war might well have ended barely after it began. Faden may have understood this when he printed this version of his battle map as the original version credited General Carleton as the commander, while this one credited Captain Pringle. It may be that by this time, Carleton no longer wanted to be associated with his “victory.” $22,500.