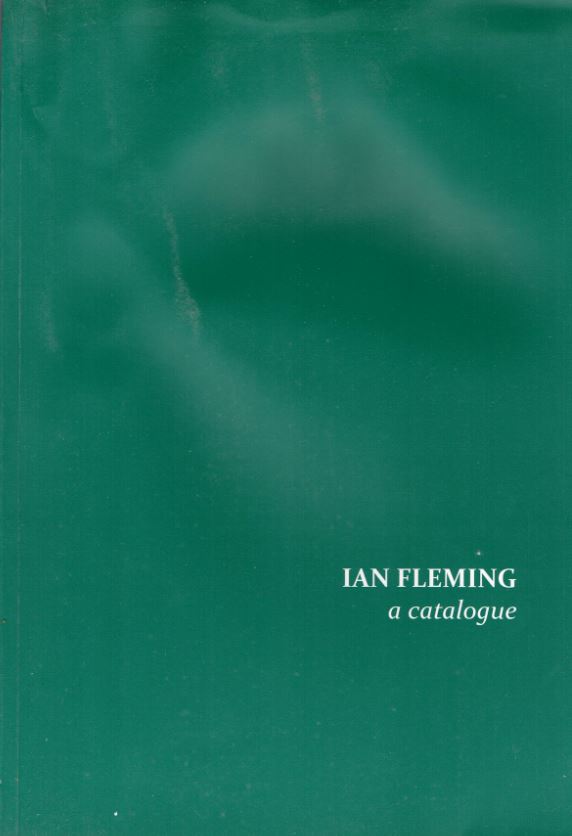 For those who collect everything about James Bond, and his creator, Ian Fleming, Adrian Harrington Rare Books has published Ian Fleming, a Catalogue. This catalogue about the fictional Secret Service Agent and his very real creator was compiled by Jon Gilbert, author of a recent bibliography of Fleming. The James Bond stories were not all that Fleming created, though he is not remembered for much else, with one exception. Bond came to dominate Fleming's writing.

Fleming had been a British intelligence officer during the Second World War. After the war, he struck up a close friendship with Viscount Kemsley, a publisher whose properties included the Sunday Times of London. Fleming was employed at a generous salary and given a few months off each year. It afforded him the time to write. While he wrote a number of short pieces, he came out of the war wanting to write a spy novel. In 1952, he turned out Casino Royale in a short amount of time. He was not much impressed with his work, nor was the public particularly overwhelmed after its release. Its sales built slowly. It would not be until the end of the decade and several more books that Fleming and Bond's popularity would take off. That would be followed in the early 1960's with the film versions starring Sean Connery, an enormous success that made Bond a household name.

Unfortunately, Fleming did not get to see much of this great success. The first film was released in 1962. However, Fleming, a chain smoker and drinker, had already suffered a heart attack in 1961. He recovered, but his health had deteriorated, and a second heart attack in 1964, at the age of 56, ended his life. Bond has lived on in print and on film, with numerous actors portraying the role after Connery, though Fleming did not see much of his great success. Here are a few of the Fleming items, both Bond and others, offered by Adrian Harrington.

Item 2 is a copy of that first Bond book, Casino Royale. Most of the secret agent's notable idiosyncrasies were introduced in this first appearance. This copy is a first impression, first issue, published in 1953. Priced at $44,000 (a change in exchange rates since publication of this catalogue may result in dollar prices a few percentage points higher at this time).

Most of the Bond titles are familiar names, but perhaps this one is the best known of them all – Goldfinger. That may be attributable to the film version. The book was published in 1959, though the film was not released until 1964, the year Fleming died. This copy is a first issue, second state, and is inscribed by Fleming to his mentor, Viscount Kemsley. Kemsley's generosity to Fleming made his success as a writer possible, though he was justly rewarded in the end as Fleming's role as a writer for Kemsley's newspaper became particularly beneficial as his popularity rose. Item 56. $30,000.

Diamonds are Forever, the fourth Bond novel, led to Fleming taking on this factual account in 1957: The Diamond Smugglers. John Collard, an agent for the International Diamond Security Organisation, approached Fleming for assistance with an account he had prepared about diamond smuggling. Collard had submitted his account to the Editor of the Sunday Times, who following Fleming's Bond novel about diamonds, thought he was the obvious choice to write this account. Item 142. $280.

Item 166 is volume 1, number 1, the very first issue of The Book Collector, the British journal for those who occupy themselves as do most people reading this review. What does this have to do with Ian Fleming? Very much, it turns out. Fleming was himself a book collector, acquiring a very good collection of scientific books. This was not the mere pastime of a wealthy author, but something in which Fleming had been engaged long before James Bond was born. Indeed, Fleming began publishing this magazine before publishing his first Bond book. The Book Collector was the successor to an earlier publication by Bond's employer, Lord Kemsley. Fleming was one of those put in charge when it debuted with this Spring 1952 issue. Kemsley quickly tired of the magazine and sold it cheaply to Fleming, who became its publisher. The journal is published to this day. $120.

Earlier we mentioned that Fleming is not remembered for much writing other than the Bond series with one exception. Here it is: Chitty-Chitty-Bang-Bang. This was Fleming's one attempt at writing a children's book, and it too became a very successful movie. Fleming used to tell his son fantastic bedtime stories, and this one was based on a family and its magical car. Item 157 is a first edition, first impression of the three volumes published 1964-65. $1,200.

We conclude with a book that has both more and less to do with James Bond than any of the others: To James Bond With Love. The title is a play on “From Russia, With Love.” The author is Mary Wickham Bond, also known as Mrs. James Bond. No, Bond wasn't fooling around behind his wife's back when he was carrying on with various gorgeous women. Mary was the wife of the real James Bond, who was a naturalist and writer of books about birds. Fleming wanted a very simple, basic name for his hero, and he had a copy of the real Bond's bird book. Fortunately, the real Bond was amused by the whole thing, rather than upset by his name being hijacked. This book is Mrs. Bond's 1980 account of her husband's life, including some of the strange occurrences resulting from his name being borrowed. She noted such issues as difficulty getting through customs, refusals of banks to cash his travelers' checks, and being called by young women in the middle of the night. Item 198 is a first edition, inscribed by Mrs. Bond. $600.