The Islamic World from the Antiquariaat Forum 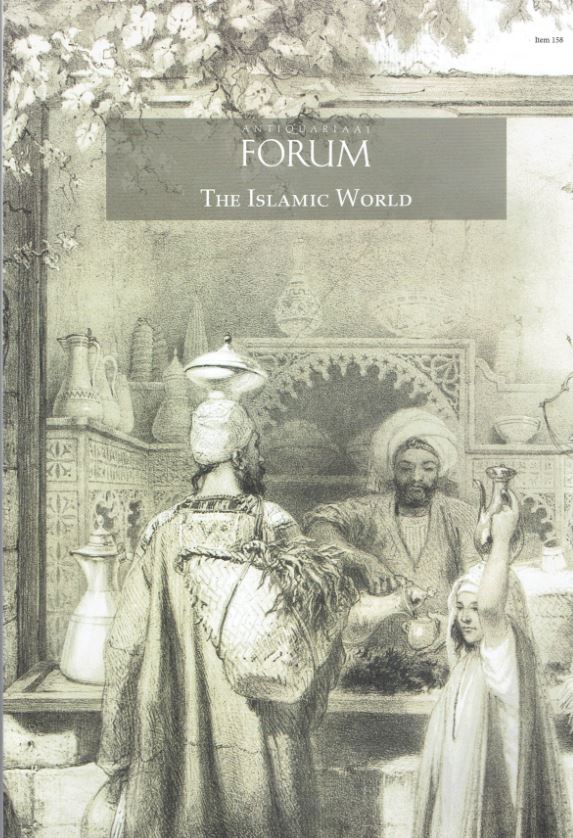 The Antiquariaat Forum has released a catalogue focused on The Islamic World. It contains books, manuscripts, and other documents pertaining to Islamic lands from centuries past. Among these are several incunable books, along with printings of earlier material that was written in the days before printing was invented. There are many travelogues, some targeted specifically to the Islamic world, others that touched those countries as part of larger voyages. Others were travels made by land. There are accounts of wars between those from the East and West, of scientific writings from the early Arabian world, and histories of those peoples. Overwhelmingly, the books herein were written by Europeans, so undoubtedly the accounts are viewed through that lens. These are a few of the over 250 works that pertain, at least in part, to a world we from the West still struggle to understand.

We will start with a first edition of a work written long before the development of printing: Descriptio Aegypti, by Abu Al-Fida (full name Abu Al-fida' Isma'il Ibn 'ali ibn Mahmud Al-malik Al-mu'ayyad 'imad Ad-din). This book is a description of Egypt in both the original Arabic and a Latin translation. Abu Al-Fida was a historian and geographer who was born in Damascus in 1273. He spent much of his time in the military, often fighting the Crusaders from Europe. His service was rewarded with the governorship of Hama in Syria. That enabled him to live for the last 20 years of his life in peace, and allowed him to write several historical accounts of the region. Item 3. Priced at €6,000 (euros, or approximately $8,287 in U.S. dollars).

This next item comes from a man of multiple skills and an interesting life: Voyage dans la basse et la haute Egypte, by Dominique Vivant Denon. Denon's early career was served as a diplomat for France, generally in mid-level posts. However, he lost his post when his patron died in 1787. That was probably for the better, as he was not involved when the Old Regime began to crumble a short time later. He was at risk when the Revolution turned to Reign of Terror, and his property was seized, but he was sufficiently distant from power to keep his head off of the chopping block. By then, Denon had turned to other interests, notably the artistic skills he had developed while serving as a diplomat, as well as writer and archeologist. In a fortuitous event, he met Napoleon before the latter came to power and they became friendly. He was appointed to posts in the state museum and Napoleon invited Denon to come along on his mission to Egypt. While Napoleon's main ambition was to conquer the land and raise his personal standing, the mission was also designed to learn everything imaginable about Egypt. Denon sketched numerous scenes in Egypt - cities, archeological sites, battles, the people, street scenes, and more. When Napoleon returned to France, and rose to power, Denon was placed in charge of state museums, and remained there until forced to retire after Napoleon was chased from office. Item 221 is Denon's illustrations and description of Egypt from Napoleon's mission, two volumes including 142 engraved plates, published in 1802. €95,000 (US $131,190).

This next work has to be one of the great adventure stories by an amazingly adventurous man, Ludovico di Varthema. He is best known as the first non-Muslim European to visit Mecca, which required disguising his Christian identity. Still, Mecca was just one of many stops in a five-year long travel by this early 16th century Italian, who left his home heading east in 1502. He traveled to Egypt, then Syria, were he hooked up with the Mameluk soldiers. It was working for them that enabled him to visit Mecca during the Hajj, disguising his Christian identity. However, this was not the end of his long and winding travels, which would take him to Persia, India, Burma and many other locales. He went into business with a Persian merchant, and befriended others along the way. Eventually, he became homesick, and in return for some spying, convinced Portuguese authorities in India to take him home. He returned to Italy, where he wrote of his travels. Much of what he reported on would later be confirmed by explorers who followed. Little else beyond his own journal is known of Varthema, who conducted his travels on his own rather than as a leader of an expedition. Item 260 is De uytnemende en seer vvonderlicke zee-en landt-reyse van de heer Ludovvyck di Barthema..., a second Dutch translation published in 1654. The first edition was published in 1510. €25,000 (US $34,533).

Item 54 is an account of another first European visit, this time to the legendary city of Timbuktu. René-Auguste Caillié was a Frenchman of very modest means. As such, he was intrigued by the offer of the French Geographic Society of a 10,000 franc award to the first European to visit Timbuktu and live to tell about it. The first part, reaching Timbuktu, had previously been achieved, but not the live to tell about it part. Caillié learned the language and customs of the land from Arabs and converted to Islam. He then used his connections to have others lead him to the mysterious city. He arrived in 1827, spent two weeks in Timbuktu, and returned by making the difficult journey across the Sahara to the North African coast. Offered is Caillié's account of the journey and what he found, the first Dutch edition published in 1831, the year after the first: Dagverhaal eener reize naar Temboktoe. His most notable finding was that there were no great riches, no streets paved in gold. Instead. Tinbuktu was a poor, isolated city. €1,950 (US $2,693).

King Sebastiao (Sebastian I) served as King of Portugal for 21 years, though he only lived to be 24. Most of those years the country was run by regents. Sebastian must have felt deserted. His father died two weeks before his birth, and his mother left a short time later to serve as regent of Spain for her father, never to return. Sebastian became King at the age of 3 when his grandfather died. He was raised by his grandmother, who was quite strict, with Jesuit and military teachers. The result was when he achieved maturity and actual control of the country, he was an extremely devout Catholic and admirer of the military. His goal became to overthrow the closest Islamic country, Morocco. His opportunity came in 1578 when the loser of a succession battle in Morocco sought Sebastian's aid. The King brought 17,000 troops, landed in Morocco, and bravely led his men on an attack into the interior of the country. Brave, but foolhardy. Sebastian and his troops were overwhelmed. He was last seen leading the charge. A body was later returned, but there were doubts it was Sebastian's. The result was that for many years, his Portuguese admirers held out the hope he would one day return and save the country from the difficulties it experienced after he left. Item 133 is Jornada de Africa por el Rey Don Sebastian... a first and only edition of an account of the King's life, death, and succession, published in 1630. €17,500 (US $24,172).