A Lynching and More in the Wild West from Gene W. Baade 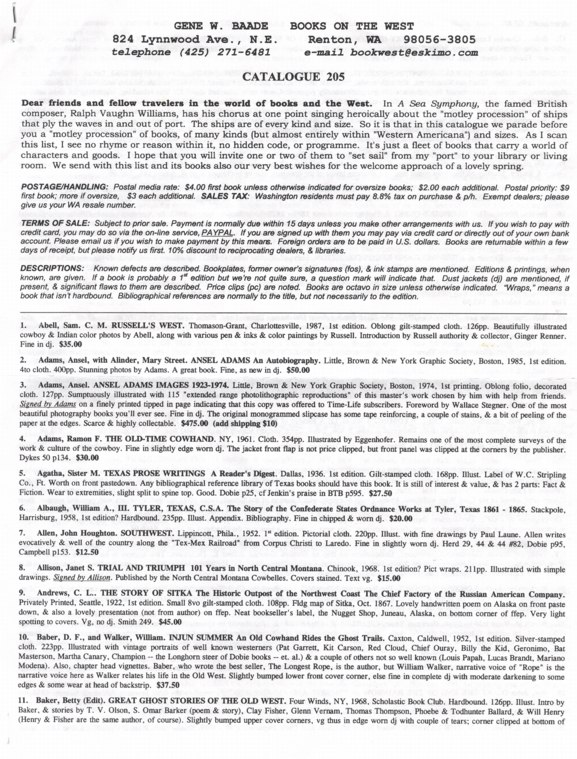 Gene Baade's catalogues ain't fancy, but neither was the Wild West.

Gene W. Baade is a Washington State bookseller specializing in the American West. Catalogue 205 presents an interesting collection of affordable books, both collectible and informative, for those with an interest in this area, particularly the Old West. Included are old books, more recent reprints of older books, and newer books about life in this territory in the 19th century. This catalogue provides an excellent source for books that are about the Old West as it was, rather than the fictionalized land Hollywood created in the 20th century. Here are a few of the books being offered in the latest Gene Baade catalogue.

Back when the Midwest was still wild, John Maxwell moved his young family to Illinois to avoid the post-Civil War feuds of the South. He had two sons, Ed and Alonzo ("Lon"), who grew up unnoticed in the old house they occupied. Neither got into anything more than petty trouble as youths, but Ed was fascinated by the lives of some of the notable criminals of the day, such as Jesse James. He evidently coaxed his somewhat reluctant younger brother to join him, and the Maxwells became noted thieves, particularly horse thieves. They operated in Illinois, Wisconsin, and surrounding states, perhaps as far west as Montana. It is said they became friendly with the James Gang, but were not members, preferring to operate on their own.

Both were imprisoned for several years in Illinois for their misdeeds. Lon was released earlier, married and settled down to an ordinary life. However, it was a struggle, and he found himself in debt. When Ed was released, he encouraged Lon to rejoin him, and the younger brother was in need of money. If Lon was initially a reluctant partner, an incident overcame that indisposition. Looking for the brothers, a local under sheriff from Durand, Wisconsin, would search his in-laws nearby residence, looking for them, now known under the alias of the "Williams." Lon's wife would later die in childbirth, a tragedy he would blame on the lawman. The Maxwell/Williams brothers would go out looking for the under sheriff, but would be intercepted by two deputy sheriffs, brothers Charles and Milton Coleman. The outlaws got the better of them. Both Coleman brothers were killed in a shootout. It was the first killing of law officers in the new state of Wisconsin. The Maxwells quickly left town, but now with a $1,700 reward on their heads.