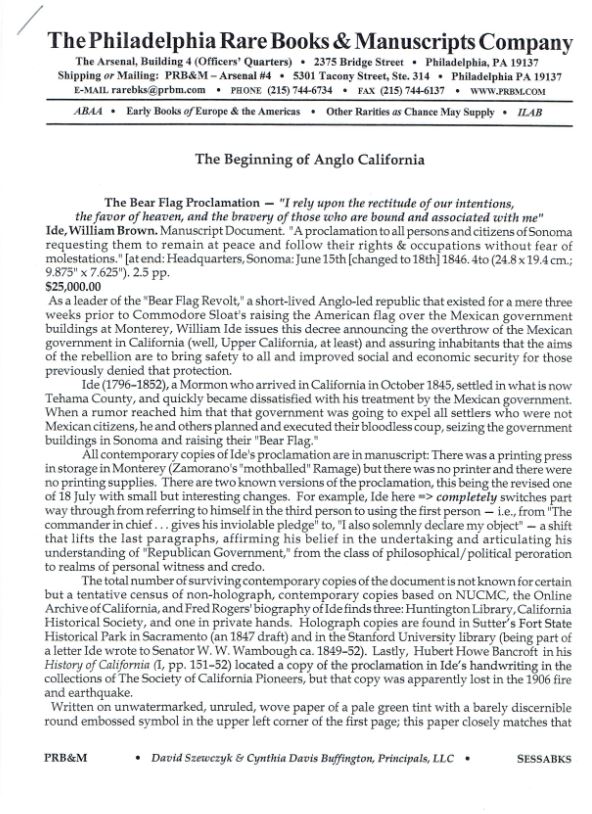 The Beginning of Anglo California.

The Philadelphia Rare Books & Manuscripts Company recently published a brochure on The Beginning of Anglo California. These items will be of interest to those who collect California material from its time of national transition – from a part of Mexico to a part of the United States. It all happened very quickly. From the Bear Flag Revolt by Anglo settlers, quickly followed by the Mexican War, Mexico's control of the state quickly evaporated. Just two years later, spurred on by the discovery of gold and the compromises between the slave and free states, California was admitted to the Union. The transition was complete. Here are some of the important items from this era Philadelphia Rare Books is offering.

The first item is a copy of William Ide's Bear Flag Proclamation, issued on June 18, 1846. With the Mexican War about to begin, rumors swirled around the Anglo community that Mexico would soon expel all non-Mexican citizens from the state. Ide and his followers revolted. They declared California an independent nation. Ide was its first and only “President.” The Bear Flag only flew over the seized government buildings in Sonoma for a few weeks. In July, General Fremont and his troops arrived to seize California as part of the broader war, and Ide and his followers quickly joined up with the Americans. This proclamation, as with all of the very few other copies, is written in manuscript. There were no presses available in California at the time to print it. Priced at $25,000.

Next up is a collection of documents pertaining to the Graham Affair. The Graham Affair occurred in 1840, a round-up of a group of Anglos, led by Isaac Graham, living in California at the time. It was something of a harbinger of problems to come. In 1836, Graham and his associates helped Juan Alvarado stage a coup against the California Governor. Alvarado did not seek independence from Mexico, just greater autonomy. Mexico recognized his authority. However, by 1840, Alvarado believed Graham and his allies would launch a revolution against him, so he had his former allies rounded up and carted off to prison in Monterey. Eventually, they were freed with the assistance of America and others. This collection includes letters signed by the prisoners and a nine-page contemporary account of the affair. $20,000.

Next is a manuscript proclamation To the Inhabitants of California, from Commodore John D. Sloat, onboard the Savannah in Monterey Harbor, July 7, 1846. Sloat had been ordered the previous year to seize California once he was able to ascertain with certainty that the U.S. was at war with Mexico. It was already becoming clear then that war was inevitable, but communications from Washington to California could take months. Sloat was to use whatever resources were available to learn of war as soon as possible once it started. Sloat had learned in May that fighting had broken out along the Rio Grande, but he held back. Finally, he reached Monterey on July 2, exchanged pleasantries with Mexican officials, and on July 7, carried out his order. It was then that this proclamation was issued. In it, Sloat states, “I declare to the inhabitants of California, that altho' I come in arms with a powerful force I do not come among them as an enemy to California but on the contrary I come as their best friend, as hence forward California will be a portion of the United States...” This copy is signed by Sloat. Philadelphia Rare Books has located a few other copies of this proclamation in collections, but no other signed ones. $175,000.