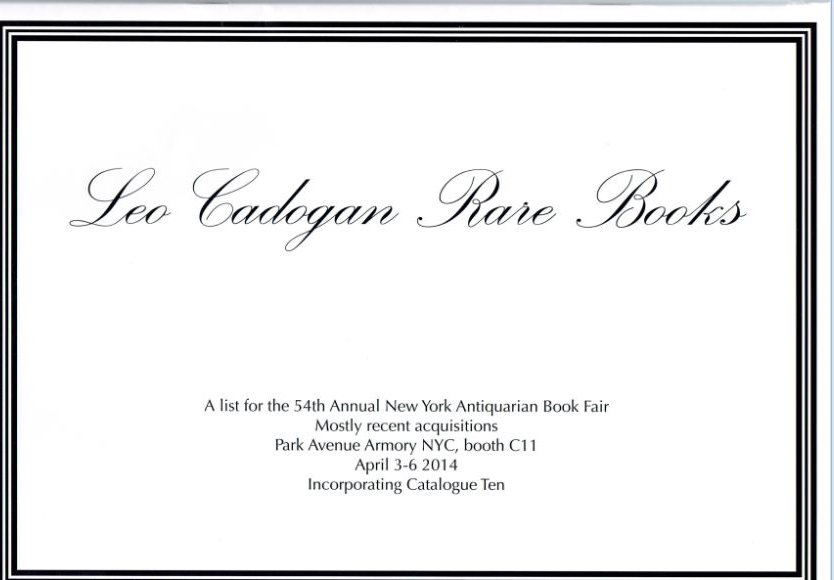 Leo Cadogan Rare Books issued A List for the 54th Annual New York Antiquarian Book Fair, Mostly Recent Acquisitions. Cadogan made the trip across the ocean from London, bringing material not seen that often stateside. Here are a few of the books that visited New York, antiquarian all.

We start with an account of the life of a very pious woman who lived a long time ago: Nueva maravilla de la gracia, descubierta en la vida de la venerable Madre Sor Juana de Jesus Maria... This is one of two issues from 1674, the second year of publication of this biography by Francisco Ameyugo. Juana de Jesus Maria Rodriguez had a calling to serve a higher purpose, but her family wanted her married, and so she complied. She married one Matias Ortiz, who was said to be a tyrant. Cadogan informs us, “She never slept with him and he threatened her with death.” As to whether these two things were related we do not know. On one occasion when he dragged her away from her home in Burgos, Spain, she was visited by the Devil, followed by Jesus, Mary and Joseph. She kept a varied company. She continued to have visions throughout her life, and when her husband died, she could finally move on to her calling. She debated between joining the Franciscans or Carmelites. St. Francis appeared and steered her in the right direction – the Franciscans. This book contains some writings of Mother Sor Juana along with verses she sang to the harp. She lived from 1564-1650. Item 4. Priced at $986.

Here is another memorial... of sorts. It is an oration in honor of Rosine: Oraison funebre de ma petite chienne. Rosine was author Germain-Hyacinthe Romance de Mesmon's little dog. The work is a funeral oration for him. Most dogs don't get a published funeral oration, but Rosine must have been special. This first edition was published in 1785, so we gather that must have been around when the little dog passed on. Romance de Mesmon was a writer who published a couple of other works, though he is not exactly a household name today. Item 68. $306.

Item 49 is an early fundraising appeal in Europe on behalf of the Diocese of Louisiana. After the Louisiana Purchase, the Catholic Church no longer received any governmental support. In 1815, Louis-Guillaume du Bourg, Archbishop for Louisiana and the Two Floridas (there were still two then), traveled around Europe, seeking funds along with 20 missionary priests for the Diocese. De Bourg then went to America, where he served as Archbishop for 10 years. He settled in St. Louis where he founded St. Louis University, the first Catholic university west of the Mississippi. This circa 1815 appeal is entitled Notice sur la mission de la Louisiane. $1,105.