Old Books for a Recent Fair from Knuf Rare Books 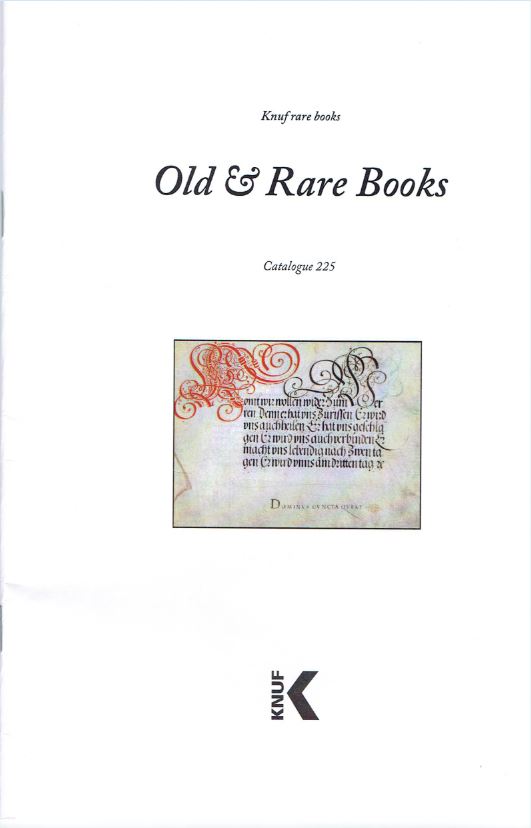 Old books for a new fair.

Knuf Rare Books has released their Catalogue 225. Old & Rare Books. This catalogue features books the French bookseller brought to the recent New York Antiquarian Book Fair. Some of these books go back to when there was not yet a New York, and many others to when it was young. However, they were published back in the Old World – various European locations. Many of the items actually represent whole collections of old books. There are auction catalogues, of books and art, and others are bibliographies. Other books feature such topics as architecture and gardens. Here are a few of the items that finally made their journey to the New World a few weeks ago, centuries after they were first printed.

Instead of starting with books you ought to read, we will start with those you shouldn't read. Item 30 is a 1593 edition of the Index Librorum Prohibitorum, the list of books whose reading was forbidden by the Catholic Church. The index was first published in 1557, its purpose to counteract the influence of the Protestant Reformation. However, by the end of the century, it began to include books promulgating unwanted ideas within the church. The list was a natural outcome of the invention of printing a century earlier and the ability to spread new ideas to large numbers of people. Censorship was hardly limited to the church, as governments censor, and still do, works they do not want people to read. The Church eliminated its publication of lists of prohibited books in 1966. Priced at $2,500.

Item 18 provides a look at government control of printing. It is a collection of Arrets du Conseil d'Etat du Roi, printing rules from the government and King of France during the last two decades of the Old Regime, 1771-1789. It provides regulations for printers and booksellers, tax requirements, and censorship. Despite the government's best efforts, the ideas of the Enlightenment spread anyway, and it would not be much longer before the French monarchy would crumble in a bloodbath. $7,200.

Item 38 is the four-volume catalogue for the sale of the Bibliotheca Meermanniana in 1824. It was one of those personal libraries the likes of which we may never see again. Baron Gerard Meerman was a lawyer and scion of a successful German family during the middle of the 18th century. Baron Meerman liked books, so much so that he began to put together a library. It had few limitations. Meerman would buy up the libraries of others, such as that of the Jesuit College of Clermont when it was forced to close down. He bought it all. After compiling a huge book collection, he began buying manuscripts to add to it. Gerard Meerman died in 1771, but his son, Johan, continued the library. He retained his father's collection until he died in 1818. Six years later, the library was dispersed through this auction. One of the noted buyers, particularly of the manuscripts, was the obsessive collector Sir Thomas Phillipps. Phillipps was determined to preserve one of everything, and manuscripts often being one of very few copies if not one of a kind, he collected a lot of manuscripts. These catalogues describe the 10,000 books and 1,100 manuscripts that were offered in this sale, and includes the price list. $2,800.

Item 13 is a first edition of what is likely the first separate treatise on oak trees: De Varia Quercus Historia (a history of the various oaks). The author of this 1555 book was Jean de Choul, a French pharmacist. He describes the various species of oak trees, their histories, the insects that live in them, superstitions pertaining to them, information about trees that commonly grow together with oaks, and their medicinal properties. $4,500.

Item 27 is a first edition of The Historie of Scotlande, conteyning the beginning, increase, proceedings, continuance, Actes and Governemente of the Scottish nation, from the originall thereof unto the yeare 1571. This is the Scottish part of what is known as the Holinshed Chronicles, the earliest major English history, compiled by Raphael Holinshed. It contains sections on the history of Scotland and a description of the land. The Chronicles had begun to be written 25 years earlier by Reginald Wolfe, but Holinshed, his assistant, had to finish the work after the former died. The first edition had long been known as the “Shakespeare edition,” as Shakespeare used Holinshed's work for the historical basis of many of his plays, but it turned out Shakespeare actually had a second edition. The first edition contains hundreds of woodcut illustrations, which were lacking in the second. $7,200.