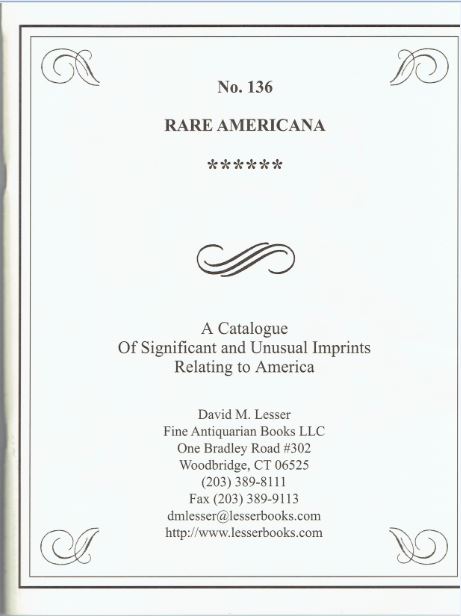 David M. Lesser Fine Antiquarian Books has issued a new catalogue of Rare Americana. This one is No. 136. It is primarily filled with shorter form material from 18th and 19th century America. Many items pertain to the long running battle over slavery, or earlier skirmishes between North and South such as the nullification crisis. There are also numerous pieces which deal with disputes between the colonists and England in the days leading up to the Revolution, often sermons by ministers who mixed politics with religion. In all, these works provide a fascinating look at early American history. Here are a few.

Item 16 is one take on a terrible tale that tarnished several reputations in the U.S. military. Capt. Frederick Benteen did not quite emerge unscathed, though he did not take too much blame for General Custer's brave, but foolhardy attack on an Indian encampment much larger than he imagined. Benteen was searching for Indians on Custer's left flank when he received a message from his commander, saying that he had found a large Indian village, and that Benteen should come quickly with his pack mules carrying ammunition. Bringing pack mules would slow down his speed. Nevertheless, some question whether Benteen moved as quickly as he could have. He next met up with Marcus Reno's badly battered troops, and the two regrouped on a ridge. They continued to move slowly, though they could hear the battle in which Custer was engaged. Still, they had no idea what was happening, and it is dubious whether swift action would have made much of a difference. Item 16 is The Custer Fight. Capt. Benteen's Story of the Battle of Little Big Horn... It was published in 1933 and is signed by author E. A. Brinistool who sought “to correct many misleading and distorted stories dealing with the Battle of Little Big Horn.” Priced at $375.

Thomas Paine was a revolutionary, a defender of human rights whose disdain for organized religion would eventually make him something of a pariah in his homelands of America and England. He became a hero in America with his publication of Common Sense in 1776, a commanding argument for revolution. However, his popularity would later fade with his controversial religious views and support of the French Revolution. Still, he continued to expound his radical views, and some way ahead of its time are were expressed in item 103, Agrarian Justice, Opposed to Agrarian Law, and to Agrarian Monopoly. This book proposed a version of social security almost 140 years before Roosevelt. Paine called for a pension of £10 per year to be paid to every person over the age of 50. Fifty was the average adult life expectancy at the time, and £10 was a little under half of the wages of a typical laborer. Paine also proposed a one-time payment of £15 to every citizen on reaching the age of 21, to give them a start in life. That is an interesting twist on the debt many young people start out with today as a consequence of the cost of education. Paine proposed to pay for this and other assistance for the poor through a property tax and a 10% tax on inheritances. This pamphlet was published in Philadelphia in 1797. $750.

Here's something you may not have thought about before. What did they have before auto insurance? The answer is horse insurance. Item 73 is a broadside printed in 1866 by the Great Western Horse Insurance and Detective Company of Decatur, Illinois. It's headline blasts STOP THIEF!, followed by an image of a thief being chased on horseback and another bold headline, STOLEN!. It goes on to explain that a 6-year-old black horse had been stolen from a resident of Peoria County, and obviously, the insurance company wanted the horse back so it would not have to pay the claim. $650.