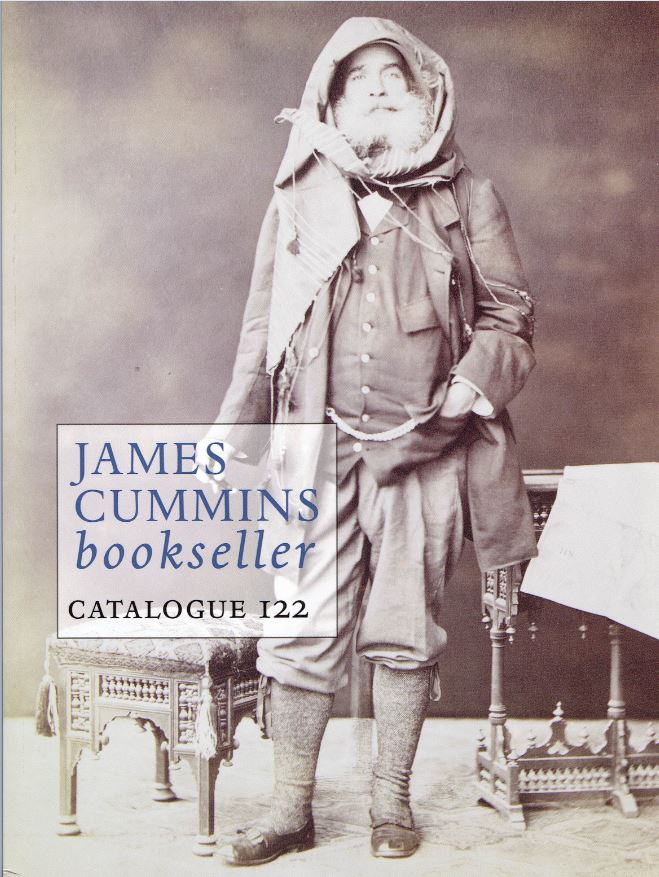 James Cummins Bookseller has published their Catalogue 122. This is a typical Cummins catalogue – filled with outstanding material, but otherwise hard to peg. You really have to see one of these catalogues to know what is inside. Nonetheless, we will describe a few items that hopefully provide a feel for what you will find.

Anyone care to guess the nature of dress of that gentleman making a fashion statement on the cover? I thought maybe some Arctic explorer dressing for dinner, but that is about as far off as it gets. The man is a French Egyptologist, which just goes to show French and Egyptian fashions don't mesh. To be precise, the gentleman is Count Ludovic Lepic. Lepic was an artist, a close friend of the better known painter Edgar Degas. Lepic can be seen in several of Degas' paintings. In the 1870's, Lepic developed another great interest – archeology. He was one of the founders of the Societe d'etudes du Nil, a group of archeologists, scientists, engineers and artists who traveled to Egypt in 1882 to promote the building of dams on the Nile River to control the annual flooding. In 1884, Lepic published a memoir of the expedition. This item is a collection of 8 large photographs in an album with the manuscript title Societe d'etudes du Nil, the photos taken by Antonio Beato. Beato was a noted photographer of Egyptian scenes and others along the Mediterranean. Along with Lepic's portrait in a strange combination of French and Arab dress, there are six more of expedition members plus one of Philae, then an island in the Nile, now an island in a dammed lake. Item 22. Priced at $9,500.

Here is an edition that contains many “firsts,” though it is hardly a first edition of the book itself. Item 7 is The Holy Bible, thousands of years in the making, though this edition is from 1790. It is most notable as the first Catholic Bible printed in the United States. This Bible was first printed in England in 1609, but this was the first edition published by the important American printer Mathew Carey. Carey saw a need for an American printing though Catholics were a fairly small minority at the time. He obtained 475 subscribers, and it is believed he limited the run to 500 copies. $12,500.

This is another notable bible, though for different reasons. This one is The English Bible, and it is celebrated not for its denominational connections but for its artistic qualities. It was published from 1903-1905 by the Doves Press, and is still considered not only Doves' finest work, but one of the greatest private press printings ever. Its distinguishing features are the large red initials and red “in the beginning” in the beginning of Genesis. $15,000.

Item 52 is an archive of 11 letters plus one quite interesting document that tie together some of America's important literary and political figures of the 19th century. The document is a lease for the home of Henry David Thoreau and the Thoreau family. No, it's not for the cabin on Walden Pond, but his residence in Concord. It is a 3-year lease, with an option for another year, dated May 1873. Thoreau died in 1862, so he was not renting out his house. The lease is signed by his last surviving sibling, Sophia Thoreau. The lessee was F. B. Sanborn. Sanborn was a devoted follower of Thoreau and was friendly with those in a circle of transcendentalists, including Thoreau, Ralph Waldo Emerson, and Louisa May Alcott. When the lease was up, Sanborn moved to his own house and Alcott purchased the Thoreau homestead. The transcendentalists believed in the essential goodness of man and self reliance. They were also abolitionists, Sanborn being so ardent in his beliefs that he was arrested for aiding John Brown, only to be freed as a result of strong objections from the people of Concord. This archive also contains 11 letters written to Francis Henry Underwood. Underwood was the founder of The Atlantic Monthly (still published today as The Atlantic) in 1857. Emerson, Harriett Beecher Stowe, and others supported the endeavor, and not surprisingly, the magazine was pro-abolition in its early days. It is not all that surprising that the Thoreau-Sanborn lease found its way to Underwood's possession. Among Underwood's letter writers were Edward Everett, the great orator, Secretary of State, Governor and Senator for Massachusetts, who gave the main, two-hour speech at Gettysburg (Lincoln's brief address was something of an afterthought at the time); diplomat Charles Francis Adams Sr., son and grandson of Presidents; and historian and Oregon Trail traveler Francis Parkman. $4,000.