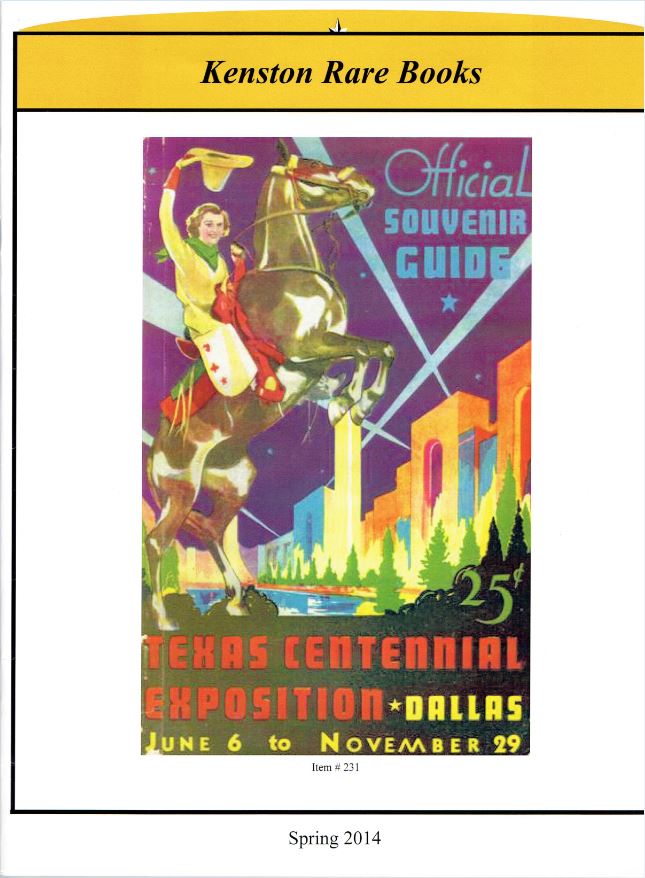 Texas and the American West.

Kenston Rare Books has released their catalogue for Spring 2014. Fine Books on Texas and the American West. This is overwhelmingly a collection of Texiana, though multiple titles can be found on bordering states Oklahoma and New Mexico, and a few from farther off western locations such as Montana. Texas is a land rich in oil, rich in cattle, and rich in history. There is no limit to what can be said about Texas, and the many books in this collection testify to that point. These works cover the days from Texas first achieving its independence from Mexico to the middle of the last century. Here are a few of them.

Smuggling across the Mexico-Texas border is nothing new, even if what is being smuggled changes. Today, the trafficking is in drugs and humans, and as ever, the border is a porous boundary. During Prohibition, it was liquor that was being smuggled in from Mexico. Item 95 is Horsebackers of the Brush Country: A Story of the Texas Rangers and Mexican Liquor Smugglers, published in 1968. It was privately printed for the author, Maude T. Gilliland, who had a close look at her subject, her husband, father and grandfather all being Texas Rangers. The “Tequileros” used pack animals to carry their loads through the brush country of South Texas, at times ending up in violent confrontations with the Texas Rangers. The first part of this book is Gilliland's account of this activity, while the second part provides photographs and short biographical sketches of those who attempted to intercept the trade – Rangers, Customs Inspectors, Sheriffs, Border Patrolmen, and U. S. Marshals. This copy is signed Priced at $275.

The booklet depicted on this catalogue's cover is the Official Souvenir Guide Texas Centennial Exposition. It may not have a date but one is not necessary. It could only be 1936. It contains a listing of the various pavilions and other features of the fair, a master plan of the grounds, a map of the host city of Dallas, photographs and advertisements. Many of the buildings are described, including the Electricity Building, Texas Hall of State, Chrysler Hall, and the Hall of Negro Life. Item 231. $100.

Despite the cute nickname, “Little Reddy,” Robert McKimie, was not a nice man. Ask Johnny Slaughter. No, ask his heirs. An army deserter, McKimie killed a man in Utah and was sentenced to 15 years, but escaped. He then hooked up with the Sam Bass-Joel Collins gang outside of Deadwood, South Dakota. They took to robbing stages making the run to Cheyenne. It was there that he shot and killed stage driver Johnny Slaughter, a well-known, popular driver and son of a Cheyenne Marshal. He claimed it was an accident, but even his compatriots realized this was not a good move. They ran him out of the gang. McKimie would move on, spending time in numerous locations before buying a business and settling down in Ohio. He was eventually tracked down there by a South Dakota lawman, put in jail, escaped, returned to crime, and was finally recaptured. “Reddy” was a contradictory personality, a likeable, western storytelling businessman befriended by his Ohio neighbors, but who was especially brutal as a criminal. Item 31 is The Life and Adventures of Robert McKimie, Alias “Little Reddy,” from Texas... by J. W. Bridwell, published from Hillsboro, Ohio, in 1878. The rest of McKimie's story becomes vague. He was convicted and spent 14 years in an Ohio prison. After release, he reportedly returned to the Black Hills region of South Dakota, but what became of him after that is not known. Item 31. $1,750.

Here is another book about a bad man, or a whole bunch of bad men: Vicente Silva & His 40 Bandits. This is a 1947 first edition in English of a book written by newspaper reporter Manual de Baca and originally published in Spanish in 1896. Silva was a prosperous saloon keeper in Las Vegas, New Mexico, who decided he had a need to supplement his income. The saloon became headquarters for his “Forty Bandits” or “White Caps,” whose members were unknown, but who terrorized the area. Their specialties were stealing cattle and horses that they would sell in Colorado, robbing ranches, and holding up itinerant workers who had just received large paychecks, robbing and killing them, their bodies never to be found. In time, the law found some of the horses on Silva's property. They convinced one his bandits to act as a spy, but Silva and his men figured it out and killed the man. However, Silva then feared his own brother-in-law would tell the law, so Silva had him killed. Then he feared his wife was asking too many questions concerning the disappearance of her brother, so he killed her too. He ordered three of his men to dig a pit for her body, but when he arrived, the men, now fearful that Silva was losing his mind and was a danger to them, killed Silva and dumped both bodies in the grave. With their leader gone, the gang quickly fell apart and security returned to the community. Item 72. $125.