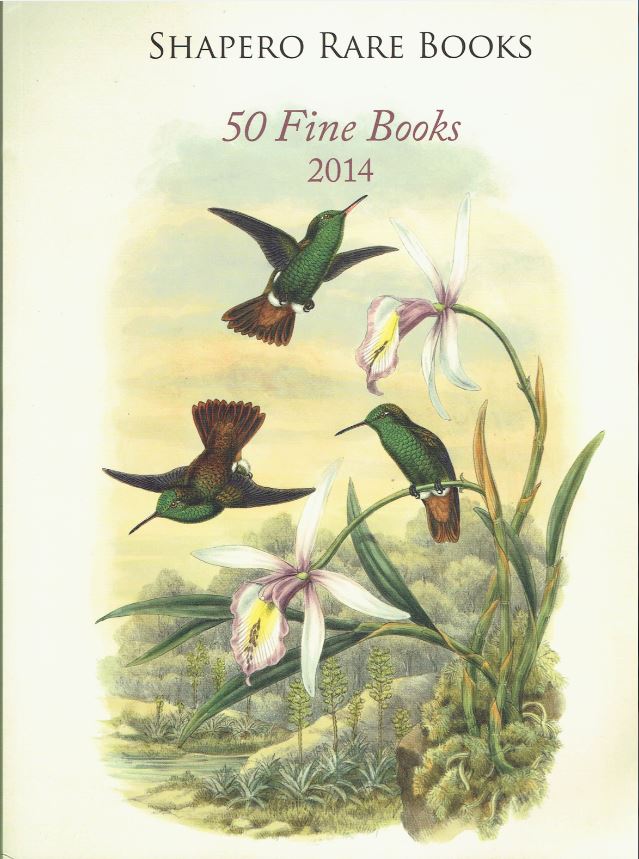 Shapero Rare Books has published a catalogue of 50 Fine Books 2014. These certainly are fine books. While not stated, the most noticeable feature of these books is the exquisite illustrations. The text can be important too, but the majority of these books include illustrations that are works of art. Subjects include animals, birds in particular, flowers, architectural wonders, scenic locations, natives of far off lands, costume, and other topics that lend themselves to fine illustrations. These are books worthy of more than just reading. Here are a few of the fine fifty.

One would not expect a major early account of American Indian culture to have been written in German, but that is the case of the first edition of Reise in das Innere Nord-America in den Jahren 1832 bis 1834, Prince Maximilian's account of a visit from 1832-1834. The German Prince wanted to learn about America's natives in what proved to be the waning days of their still being mostly uninfluenced by western culture. He traveled up the Missouri River, stopping at various forts and visiting numerous tribes, including the Sioux, Mandan, Crow, Cree and Blackfoot. He wintered over with the Mandan, becoming particularly familiar with their customs. Maximilian reached as far as Fort Mackenzie, operated by the American Fur Company, in present-day Montana. While the Prince was a close observer, he also brought an outstanding artist along to capture images of the natives. After returning to Germany in 1834, Maximilian prepared the text while artist Karl Bodmer completed his illustrations, which are both detailed depictions of what they saw and artistically commanding. There are also images of other places they visited on their journey, including lighthouses in Boston and Cleveland, New York harbor, Niagara Falls, Lake Erie, and the confluence of the Yellowstone and Missouri Rivers. This first edition in German also includes a section on Indian languages that was not included in the English and French translations. The four volumes were published from 1839-1841. Item 6. Priced at £225,000 (British pounds, or about $374,466 U.S. dollars).

Next we have an album of eight portraits that fall along the border between realism and art, created by a device Shapero calls a “precursor of photography.” Frenchman Gilles Louis Chretien devised a contraption he called a “physionotrace” to capture realistic profile portraits. It was based on the principle of a pantograph, where a pen used to write or draw on one page is connected to a second pen that writes or draws the same image on a second page. That was sort of an early version of a copier. With Chretien's physionotrace, he would trace around the profile of the subject's face which would relay his movements to paper. It would later be filled in and colored by the “artist.” It enabled him to create realistic images of people without having extraordinary artistic skills. Chretien produced hundreds of these during the late 18th and early 19th century, including those of many notable subjects. £4,500. Item 15. (US $7,488).

This is not a book about evolution, and yet it was an essential piece to the puzzle Darwin put together. Indeed, while Charles Lyell would come to recognize the logic in Darwin's theory three decades later, he remained terribly conflicted by his deep religious beliefs. Item 36 is Lyell's Principles of geology, being an attempt to explain the former changes of the earth's surface, by reference to causes now in operation, three volumes published 1830-1833, while Darwin was in South America making the discoveries that would lead to his theory. Lyell's principle was that geologic changes in the earth, from mountains rising to streams eroding, went on through time at a constant pace. This meant that the earth could not be anything like 5,000 years old, as many concluded from the Bible's timetable. It must, in fact, be far older to accommodate everything found in the geologic record, considering the slow pace of these changes. This would be critical for Darwin, as prior theories of “evolution” required sudden change, which would eliminate the mechanism of natural selection. However, once Lyell's realization that the earth was far older than previously thought was factored into the equation, Darwin's theory became a reasonable explanation for what was found. £12,500 (US $20,800).