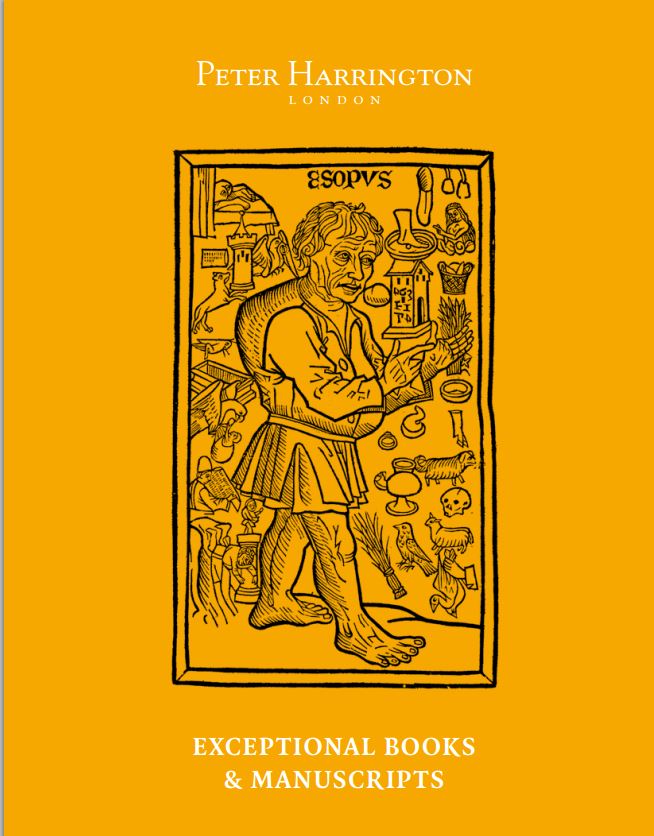 Peter Harrington of London has issued a catalogue of Exceptional Books & Manuscripts, alternate title Catalogue 97 Spring 2014. That's an uncomplicated title for a collection that can best be described as extraordinary copies of extraordinary books. The subjects vary, covering both fiction and nonfiction, some as old as the 15th century, others as recent as the 20th. The common thread is this is important material, intended for those who collect at the highest level. Here are a few of the works offered.

This book would likely be relatively obscure today, one of many travel narratives, were it not for events some two decades after it was published. Item 17 is Narrative of the Surveying Voyages of His Majesty's Ships Adventure and Beagle, between the Years 1826 and 1836, describing their Examination of the Southern Shores of South America... The ships undertook two voyages, with the books edited by their captains, Philip Parker King and Robert Fitzroy. These were voyages of science and discovery to Patagonia, the southern part of South America. This adventure might have faded into history were it not for the later works of the naturalist on the second voyage, Charles Darwin. It was from his post on the Beagle that Darwin observed life on the continent and offshore islands, noticing slight differences in related species, as well as geologic changes on the continent. It was these observations that led him to the earth-shaking conclusion that the changes he saw in species was the result of evolution by natural selection. Darwin's observations, though not his ultimate conclusions, are described in the third volume of this four-volume set. Priced at £27,500 (British pounds, or roughly $45,125 in U.S. dollars).

Item 26 is the book that catapulted the career, and perhaps ultimately led to the downfall of one of the 20th century's most noted writers, F. Scott Fitzgerald. Fitzgerald was an essentially unknown author when This Side of Paradise was published in 1920. It was a great success, and it enabled Fitzgerald and his new bride, Zelda, to live a celebrity lifestyle during the Roaring '20's. They lived somewhat beyond their means, putting pressure on Scott to produce. In time, it became harder to keep up with the demands, and meanwhile Zelda drifted into serious psychological problems. The flame burned out quickly, but it burned brightly for the Fitzgeralds during these early years. This copy of Scott's first novel is inscribed to Whitney Darrow Sr., a longtime acquaintance also involved in the literary establishment at Princeton University. £32,500 (US $53,330).

Item 12 is an eight-page typescript by Winston Churchill from 1931. It contains numerous handwritten corrections along with Churchill's signature in red ink. Britain's future PM was commissioned by the Hearst newspapers in 1931 to write a series of articles on European political issues. This one would appear under the title Winston Churchill sees Soviet Russia as Gigantic Menace to the Peace of Europe. Indeed, Churchill saw huge threats from both sides of the political spectrum during the 1930's and even foresaw their short-lived cooperation, the Molotov-Ribbentrop Pact of the late 1930's. Most people saw Churchill's views as a bit too apocalyptic, but in time those views would instead prove to be prophetic. £30,000 (US $49,228).