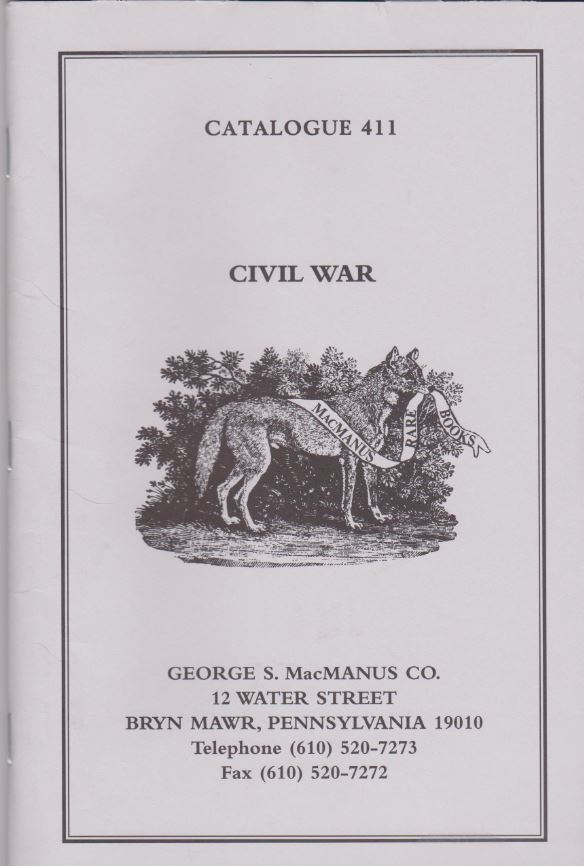 The George S. MacManus Company has issued the second part of their Catalogue 411 Civil War. Last year, the firm purchased a collection of 6,000 books, at least half pertaining to the Civil War. Not even a two-part catalogue is going to describe all of those, but over a thousand of them have been written up in this presentation. This collection includes both contemporary accounts of the war and histories written years later. There are accounts from foot soldiers to generals, many biographies of war leaders, numerous battle descriptions, and a large number of histories of various state regiments. This is a catalogue that will appeal to those interested in the details of this terrible war, including many of its more obscure accounts. Here are a few samples.

We start with a work that seemingly has little to do with the Civil War: Agricultural, Geological, and Descriptive Sketches of Lower North Carolina and the Similar Adjacent Lands, by Edmund Ruffin, published in 1861. Ruffin studied the soils of the area and provided helpful advice on such concerns as crop rotation for farmers. However, that is not what he is best remembered for. Ruffin was an ardent secessionist, promoting it with a vitriolic hatred for the “Yankees.” He even signed up for the VMI cadet corps though past the age of 60 so he could witness the execution of John Brown. For his efforts, South Carolina gave him the honor of firing the first shot at Fort Sumter, the first shot of the Civil War. Ruffin never became milder with age. After the conclusion of the Civil War, at the age of 69, he took a gun and shot himself to death. He could not bear the thought of submitting to Yankee rule. Item 654. Priced at $1,500.

Speaking of John Brown, item 665 is a book by Franklin B. Sanborn, who evidently had a different opinion of Mr. Brown: The Life and Letters of John Brown, Liberator of Kansas, and Martyr of Virginia. Brown traveled to “Bleeding Kansas” in the pre-war years to fight those who tried to bring slavery to the territory, at times using violence. In Virginia, he attempted to arm the slaves for a revolt, was captured and executed, hence his martyrdom to the cause of abolition. Published in 1891. $125.

Item 709 is a letter of support for a controversial action, received by Confederate President Jefferson Davis from Louisiana Confederate Senator Thomas Semmes on July 20, 1864. Just three days earlier, Davis had removed General Joseph E. Johnston from his command of forces fighting Sherman during the Atlanta campaign. Sherman had made steady progress against Johnston's army, moving toward Atlanta. Davis and several of Johnston's subordinates, including Lt. Gen. John Bell Hood, believed the commander was insufficiently aggressive, yielding ground too easily to Sherman's larger forces. Senator Semmes shared this view, as he wrote Davis, “I write today to approve the act and admire the moral courage manifested by it...Whatever the merits of Genl. Johnston I am satisfied that with the forces under his command, he will not or cannot engage the enemy...You will have upon your head a pack of malcontents who will howl and growl and endeavor to destroy the confidence of the people in your administration...” Hood replaced Johnston, and while more aggressive, the results were no better. Johnston's strategy of protecting his forces may have been better than throwing them into a losing battle, the Confederacy's best hope by then being that the North would tire of a war of attrition. Davis' decision proved less than popular with the public, and if Johnston was not respected militarily by his peers, Grant and Sherman felt he made the right call considering the situation. $1,500.

Davis would get his comeuppance in the northern media after Lee surrendered and he tried to escape to Mexico. Davis was captured by Union forces. A report went out that he tried to disguise himself as a woman by wearing his wife's clothing. That seems unlikely, though perhaps he borrowed her coat to stay warm. Nonetheless, it made a good story for the victors' press. Item 1076 is a comic print headed, Jeff's Last Skeedaddle Off to the Last Ditch. How Jeff in His Extremity Put His Navel Affairs and Ram Parts under Petticoat Protection. It depicts Davis in a woman's dress holding a dagger while running from Union troops on horseback. $400. Item 687 is a broadside of a song entitled Oh Jeff! Oh Jeff! How Are You Now? It too depicts Davis in women's clothing being captured by Union troops as his wife looks on. $175.

Speaking of Mrs. Davis, item 651 is her biography, Varina Howell, Wife of Jefferson Davis, by Eron Rowland and Mrs. Dunbar Roland, published in 1927. Varina Howell remained steadfastly loyal to the lost cause for the remainder of her life, and regularly supported Confederate veterans organizations. Nevins says of this book, “Extensively researched, but seriously impaired by the author's extravagant admiration of her subject.” $25.

Here are two words you rarely hear spoken together: Custer Victorious. The rest of the title explains – The Civil War Battles of General George Armstrong Custer. Certainly he was more successful during the Civil War than in his most famous battle – how could he not be? Custer fought during the Civil War and later Indian wars, but it is his last Indian battle for which he will always be remembered. This account of Custer's early military career was written by Gregory Urwin and published in 1983. Item 982. $40.