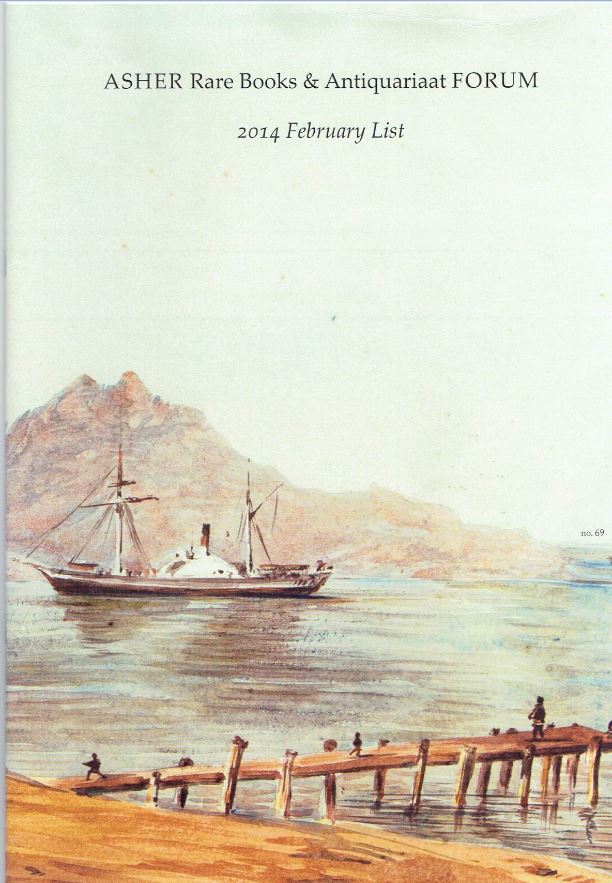 The Antiquariaat Forum and Asher Rare Books of the Netherlands published a 2014 February List to bring to the recent California Book Fair. The booksellers traveled from the Netherlands with a mix of material pertaining to their native country, Europe, Dutch possessions, Asia, and of likely particular interest to fairgoers, the Americas. As this covers a wide range of material, it cannot be readily described other than to present a few examples.

We will start from the end of the alphabet. Item 76 was written by Heinrich Zimmermann, an ordinary sailor who participated in an extraordinary voyage. He took part in the third and final voyage of Captain James Cook. Like his earlier voyages of discovery, Cook's third took him to Australia and New Zealand, and various Pacific islands. However, this one also went farther north. He was the first to visit Hawaii, and then proceeded to the Pacific coast of North America. He sailed up the coast to northern Alaska, his mission being to find a northwest passage home, but like so many others, was not successful. He returned to Hawaii where a misunderstanding with previously friendly natives led to his being killed. The mission continued without him, making one more unsuccessful attempt to find the passage, then back along the Asian coast before returning home. The completion of Cook's official account was left to his successor, Capt. James King, which took several years. However, a few crewmen beat the official account with books of their own. This violated the rules of the mission, but it didn't matter to Zimmermann, who returned to his native Germany, out of reach of British authorities. In 1781, he published his account, Reise um die Welt, mit Capitain Cook. Item 76 is a first edition. It remains unclear whether Zaimmermann's or another “sooner's” book, that of John Rickman, was the first account of the third voyage and the death of Cook. Priced at $51,500.

Here is a book you would not expect to have made its way to the Netherlands. I'm not sure why it did, but item 64 is the Ordinances and Decrees of the Consultation, Provisional Government of Texas and the Convention, Which Assembled at Washington March 1, 1836. By Order of the Secretay [sic] of State. The date of that convention for adopting ordinances for independent Texas was a bit optimistic. The month of March would see the two biggest disasters of the Texas War of Independence, the killing of all of the defenders at the Alamo, and the mass execution of Texian soldiers in the Goliad Massacre. Those at the convention would be forced to flee later in March to avoid advancing Mexican troops (the convention was held in Washington, Texas, not Washington, D.C.). All of this would change in April with the surprising, overwhelming victory of the Texians in the Battle of San Jacinto, where Santa Anna was captured and forced to grant Texas its independence. This compilation of documents was printed in 1838, and includes not just material from the March 1 convention, but includes Texas' earlier Declaration of Independence from Mexico, and the establishment of an interim government on March 16, 1836, just before the delegates fled Washington. $12,950.

Item 26 is a rare offprint of a tribute Albert Einstein wrote about the man who may have been the most influential in his life: H. A. Lorentz et la cooperation international. Einstein wrote the piece in January of 1828, shortly before Lorentz died. A postscript at the end notes Lorentz's passing in February. This article refers to Lorentz's work in seeking international cooperation after World War I. However, Einstein's connection to Lorentz came about from the work both did in the field of physics. Explanations of Lorentz's work, and Einstein's theories of relativity, are beyond the scope of this review. Suffice it to say they deal with electrons, magnetism, atoms, the speed of light, and such. The work of Lorentz provided the base from which Einstein expounded his Theory of Special Relativity in 1905. $1,700.