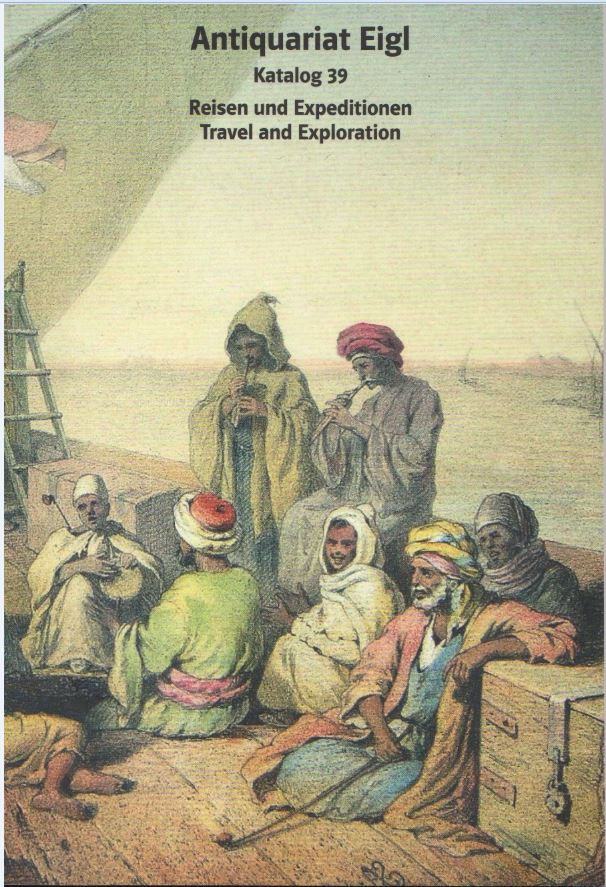 Antiquariat Eigl has released their Katalog 39 Reisen und Expeditionen or Travel and Exploration. The printed catalogue is in German but English translations are provided on the firm's website. This catalogue comes in two parts. The first relates entirely to the voyages of Captain James Cook. Though Cook was an Englishman, his discoveries were of universal fascination. We find many accounts of his travels translated to German and other languages, along with editions in English, offered here. The second part covers other travel accounts, a varied lot including journeys to the four corners of the globe. These are a few samples of the books now available at Antiquariat Eigl.

Item 18 is Reise um die Welt während den Jahren 1772 bis 1775... (Travel around the world during the years 1772-1775...), by Georg Forster, the two-volume first German edition published 1778-1780. When Joseph Banks bowed out at the last minute from the role of naturalist on Cook's second voyage, Georg's father, Johann Reinhold Forster, was hired in his place. Johann brought on his son to assist him. The Forsters kept extensive diaries and brought back much information on the natural history and natives of the islands they visited. Unfortunately, the elder Forster had a prickly personality and did not get along well with Cook. As a result, he was denied permission to participate in the writing of the voyage's official account. Johann responded by having his son, Georg, write this account. Georg not only wrote this book (with some likely assistance from his father), but published it two months ahead of the official account prepared by Cook. Forster's book is considered an essential addition to the official report. This German edition was translated from the original English by Georg Forster himself. Priced at €5,900 (euros, or approximately $8,047 in U.S. dollars).

Item 35 is Sir John Franklin. Die Unternehmungen für seine Rettung und die nordwestliche Durchfahrt, by Karl Brandes. Franklin had headed one of the many attempts to find the elusive northwest passage that would offer a direct route from England to the Pacific by sailing north of Canada. Unfortunately, it is very cold up there and the seas are frozen most of the year. Franklin was a seasoned captain, but this time his ships got trapped in ice and could not escape. Eventually, his men were forced to abandon ship and set out on foot through terrible conditions in hopes of finding their way back to rescue. Back home, no one knew what became of Franklin and his expedition. Numerous rescue ships were sent out to find him, first by the British Admiralty, and eventually funded by his despondent wife. This book provides a compilation of the missions sent out to find Franklin, at least as of its publication date – 1854. None were successful. It would not be until a few years later that artifacts of the Franklin party would be found and their fate – all on board his ships died from cold or starvation – ascertained. €1,100 (US $1,500).

Item 37 is Ten Coloured Views taken during the Arctic Expedition of Her Majesty's Ships “Enterprise” and “Investigator,” under the Command of Captain Sir James C. Ross... published in 1850. Ross headed up one of the earliest missions to find the missing John Franklin. He had promised Franklin that if no word were received from him within two years of his sailing that he would search for him. Ross searched in vain. Like Franklin, Ross was trapped in the ice several times but managed to extricate himself. Eventually he had to return, Franklin's fate still unknown. However, the Ross expedition did bring back these drawings of Arctic scenes prepared by William Henry Browne, one of the expedition's officers. €9,500 (US $12,956).

Item 64 is an account of one of the great explorations of the 18th century, though to a large extent it remains little known. It is Viaje Político-Científico alrededor del Mundo... the history of Alejandro Malaspina's (with Don Jose de Bustamante) exploration of the west coast of America and the Pacific during the years 1789-1794. It is considered by many to be of the same level of importance as the expeditions of Cook and La Perousse. Like Cook, Malaspina sought (unsuccessfully) to find a northwest passage. He also conducted many scientific investigations along the Pacific coast from South America all the way to Alaska. After that, he headed west and visited the Philippines, Australia, and various Pacific islands. Much of it was focused on learning about Spanish possessions, including Mexico and California, the expedition having been sponsored by Spain. However, Malaspina found himself on the wrong side of political intrigues after he returned, losing the Spanish King's favor. He was imprisoned for six years before being exiled to his native Italy. As a result, his findings were not published at the time. This first edition finally reached the press almost a century later, being published in 1885. €3,900 (US $5,318).

Antquariat Eigl may be reached at (0049) (0)8031 / 33504 or RalfEigl@t-online.de. Their website is found at www.AntiquariatEigl.de. The website offers an English translation of the catalogue.