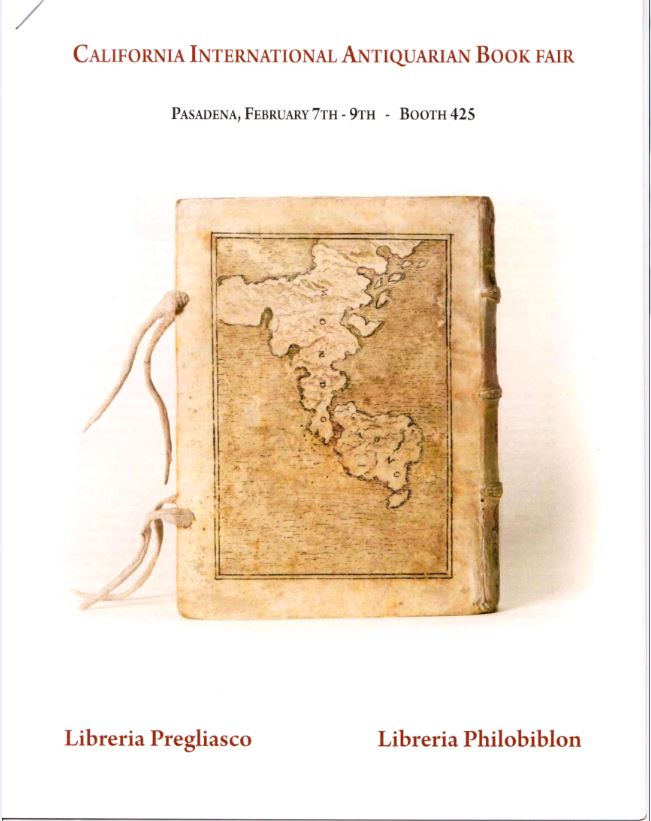 We received our first catalogue from Pr-Ph Rare Books, prepared especially for the recent California Antiquarian Book Fair. Pr-Ph is a new name, representing a combination of Italian booksellers Libreria Pregliasco and Libreria Philobiblion. Separately, they are located in Turin and Rome, but the combined Pr-Ph now has a location in New York City. They feature a selection of very old and important books, primarily from Italy, or cities that are now part of Italy, along with other European locations. Incunables and texts almost as old are to be found here. They also offer a wide selection of books related to food and cooking. Here are some samples of what this new bookselling partnership has to offer.

Item 13 is a book printed in the Netherlands, but it will be of greatest interest to American collectors. It is titled A plaine and familiar exposition of the tenne commandements, by John Dod and Robert Cleaver. First published in 1604, with a couple of dozen later editions, this 1617 printing from Leyden would not seem remarkable but for one fact. This edition was printed by William Brewster, a religious dissident who had moved from England to Leyden to practice his own Puritanical beliefs. We say “Puritanical” not in the sense of harsh, but literally. Brewster was the leading elder of the group that would become known as the Pilgrims when they emigrated to America. Brewster was the most educated of the group in Holland, and he set up a press in his home. He published a few religious tracts, including this one. The pressure built on Brewster and the other separatists and in 1619, his types were seized. It was time to move on, and Brewster was among the first group to sail to America on board the Mayflower. The booksellers believe it is likely that this copy came over with him on the Mayflower. Brewster would be a leading religious figure in the new colony for its first two decades. Priced at $120,000.

Item 4 is an early mathematical work with a couple of interesting provenances, including another Pilgrim one. The title is Opera, by Apollonius Pergaeus, published in Venice in 1537. Apollonius was not around to reap the royalties on this edition. The ancient Greek mathematician and astronomer died around 190 BC. This is part of Apollonius' work on conics, or cones, that gave us such mathematical terms as ellipse and parabola, those concepts we tried in vain to understand in mandatory mathematics courses. This copy was once part of the collection of John Dee. Dee was a mathematician himself, both astronomer and astrologist, scientist and occultist. He believed both the rational and occult were ways to access knowledge of the unseen world. Dee also served as an adviser to Queen Elizabeth I and he compiled the largest library in England at the time. This copy later made its way to the library of John Winthrop, Jr. His father, Winthrop Sr., emigrated to America in 1630 and served many terms as Governor of Massachusetts. Winthrop Jr. followed him the next year and became a successful businessman in Massachusetts, helped found the colony in Connecticut, and later served as Governor of Connecticut. Winthrop's library, like that of Dee's, was also a largest library, the largest at the time in the American colonies. $580,000.

Item 28 may seem an unimpressive book at first glance, but its significance can hardly be overstated. It is Cosmographia, by Claudius Ptolemaeus, better known today as Ptolemy. It is the most important geographic work of antiquity, Ptolemy having charted out the known world during the second century from his home in Alexandria. Amazingly enough, for the next fourteen centuries, no significant advances were made in western understanding of the world's geography. It would take Columbus to do that, and he was just a young man yet to sail the seas when this book was printed. This copy was published in Vicenza in 1475, which explains its rather ordinary appearance. It has no maps, the hallmark of most copies of Ptolemy's Cosmographia. The reason is that this is the first edition of this extraordinarily important work, which is why it so desirable. It is the first. Editions would start to be published a couple of years later containing maps, but the first edition had text only. $640,000.

After the unillustrated first edition, several with maps appeared during the remainder of the 15th century. Item 29 is a 1490 printing of Cosmographia, printed in Rome, the second Rome edition and fourth illustrated edition. It contains 60 double-page maps, and Pr-Ph notes that the incunable editions printed in Rome are superior due to advanced technical skills. The world itself was still depicted as it was in Ptolemy's time, Columbus still yet to sail, and nothing new learned in 14 centuries except some minor knowledge along the west coast of northern Africa. $460,000.

For a look at how the other half eats, circa the late 17th century, item 48 is Le Cuisinier royal et bourgeois, a 1693 second (augmented) edition. Francois Massialot created a cookbook focused on “good taste,” both literally and figuratively. While at times chefs may have celebrated the meals of regular folks, that was not the case at this time nor in France. Quoting Menell (All manners of Food), Pr-Ph notes, “...not only was anything reminiscent of rusticity and the food of peasants to be avoided, but the court and the 'best circles' were offered as models to be copied.” $4,400.

Pr-Ph Rare Books may be reached in New York at 646-370-4657. The booksellers may also be contacted by email: Filippo Rotundo filippo@prphbooks.com, Umberto Pregliasco umberto@prphbooks.com. The website is found at www.prphbooks.com