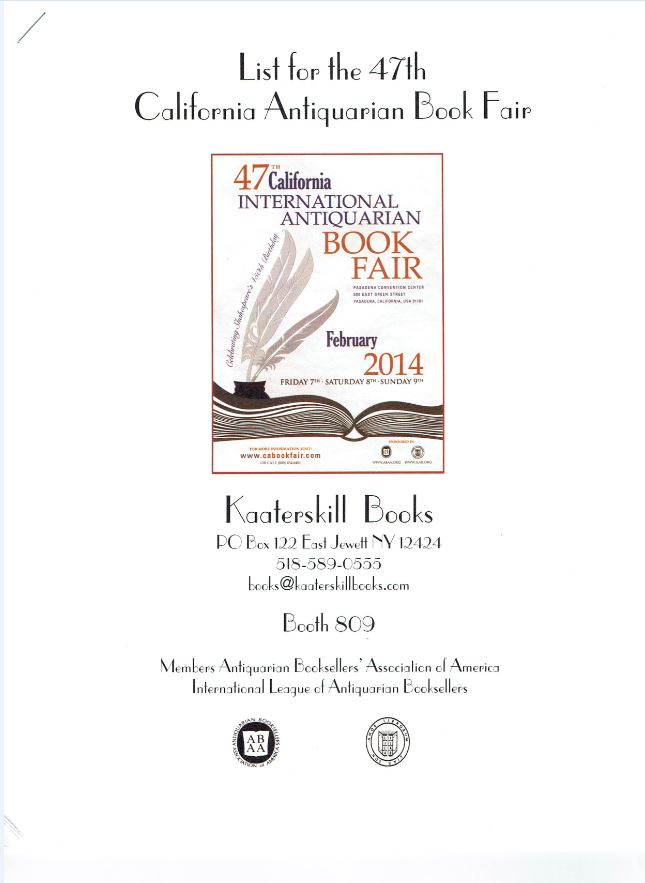 Books from the Fair.

Kaaterskill Books recently printed a List for the 47th California Antiquarian Book Fair. They offered a selection of historic, nonfiction works mostly divided between American, as in the United States, and American as in Latin American works. There is also an occasional Asian or European item thrown in. Due to the nature of those concentrations, most books are in either English or Spanish. Those whose interests lean to history in the Western Hemisphere will find much to consider here. These are just a few selections.

John Wesley is known as the founder of Methodism, but he wrote on many other subjects. One was the gathering American Revolution, which he held in disdain. He felt the colonists had no right to object to taxation without representation as they were protected by the English Crown. Perhaps he thought he could help calm the revolutionary fervor through this pamphlet published in 1775 – Calm Address to our American Colonies. Apparently, American Methodists were not so sure of this as they reputedly destroyed as many copies as they could that arrived from England. He should have stuck with theology. Item 11. Priced at $750.

Next we have a piece that comes from the days leading up to America's second great war, the Civil War. From March 2, 1861, it is an explanation from President Buchanan on Assembling Troops in Washington City. Message from the President of the United States... In just two more days, Abraham Lincoln would be taking over as President, and Buchanan couldn't get out of town fast enough. For four years, he had tried to hold the Union together by giving the South most of what it wanted, but this had angered the North while doing little to satisfy the South. Now, with the election of Lincoln, the southern states were seceding, and while Buchanan wanted to save the Union, he did not want to use anything resembling force. He just wanted to turn the mess over to his successor. Buchanan had called some troops to Washington for the inauguration to keep peace during this tense moment, but in this response to Congress, wants to reassure its members that this is the only reason for calling in some troops and nothing more. Item 35. $150.

We return to Washington City many years later, though this piece is more akin to Wesley's one about taxation without representation not being such a bad thing. Item 207 is from the District of Columbia Association Opposed to Woman Suffrage: Taxation Without Vote is no Injustice. This undated broadside comes from circa 1912-1915. Like Wesley, this group soon found itself on the wrong side of history, though their point of view had held sway for a century. $150.

Americans mostly associate earthquakes with California, but lying beneath the surface of Missouri is the New Madrid Fault, and every now and then, people start to wonder when this will creak again. It has been two centuries since it last made its presence felt, but when it does, it can put California to shame. Item 146 was published by the Missouri General Assembly in 1814: Resolution of the General Assembly of the Missouri Territory, for the Relief of the Inhabitants of New Madrid County, who suffered by Earthquakes. Among those listed on this piece was Governor of the Missouri Territory William Clark, of Lewis and Clark fame. A series of earthquakes struck near New Madrid in late 1811 and early 1812, the strongest ever known in the eastern half of America. Shaking was felt as far away as Pennsylvania and Virginia, with cracks reportedly opened in structures even farther away. The earthquakes have been estimated as being in the 7 to 8 range on the Richter Scale. Minor tremors occur regularly in the area to this day, but nothing major has occurred in two centuries. Some think this is a good sign, others that the next one is overdue. $100.

Item 225 is an account of a surveying expedition following the close of the Mexican War: Report of the Secretary of War, communicating ... the Report of Whipple's Expedition from San Diego to the Colorado. Amiel Weeks Whipple was in charge of the American half of the survey of the new border after California and New Mexico had been seized from Mexico. The border was to be a line from San Diego to the confluence of the Colorado and Gila Rivers, the latter river being the border as it moved farther east. While the mission may have seemed straightforward, the terrain was often difficult, temperatures extreme, water lacking in the desert. However, at least this portion of the boundary has stood, the portion east of the confluence of the rivers changed a short time later with the Gadsden Purchase. Weeks would go on to other surveying missions, including work on the route for the Pacific Railroad, but died in 1863 of wounds at Chancellorsville during the Civil War. $300.