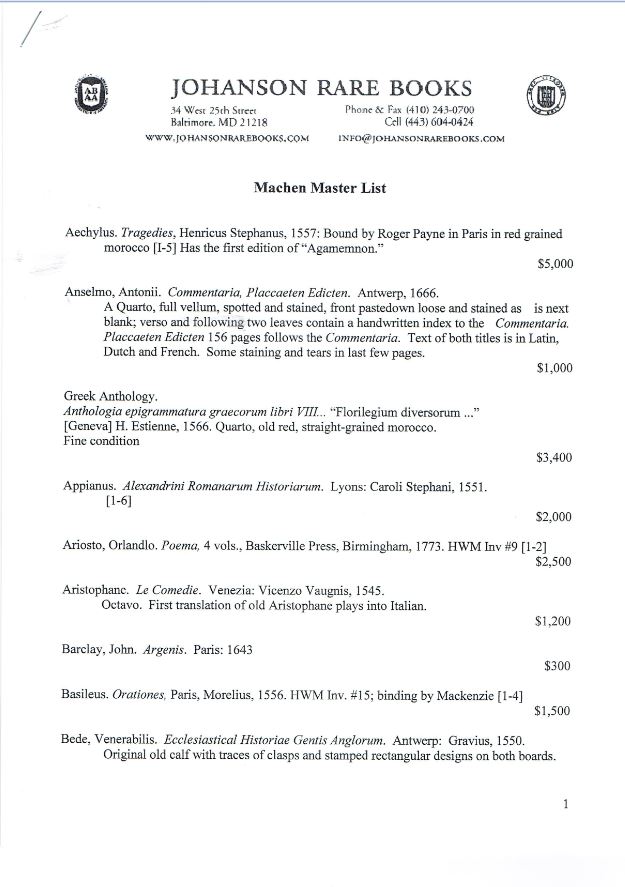 From the Machen collection.

Johanson Rare Books issued a list of books for the recent California International Book Fair. Donald and Teresa Johanson have been booksellers since the 1970's, with shops in Baltimore, Maryland. They sell books in many fields, with specialties in English and American literature, travel and voyages, early printed books, and medicine.

This listing comes with the title of Machen Master List. We presume many of these items came down through the Machen family of Baltimore. There were several Arthur W. Machens, though the date of purchase of some of these books suggest they came from Arthur W. Machen Sr. Several were purchased at the beginning of the 20th century when Arthur Sr. was practicing law with his son, active in his church, and well-read in the ancient Greek and Roman classics. This was a tradition passed down to the most recent of Arthur Machens to pass on, also a Baltimore lawyer and classic book collector, who died in 2013. Here are a few of these classic works.

Here is an early incunable: De Evangelica, by Eusebius. This is a first Latin translation of an ancient work printed at last by Nicolas Jenson of Venice in 1470. Eusebius was a third to fourth century theologian and Roman scholar who served as a bishop in Palestine. He was a prolific writer and widely respected during his time. Eusebius was noted for his extensive church history from its beginnings to the fourth century. Among his beliefs was that whatever wisdom the Greeks possessed was learned from earlier writings of the Hebrews. This was a preparation for De Evangelica, which was meant to demonstrate the superiority of the Christian religion over paganism, which would have come from earlier beliefs such as those of the Greeks. This copy of Eusebius' work contains rubricated initials throughout, along with an illuminated final leaf. It was sold at the auction of Henry Poor at Anderson Auction in 1903. Henry W. Poor and his father were founders of the well-known credit rating agency Standard & Poor's. Priced at $75,000.

Next we have a slightly later book, but of an even older text. This is Tragaediae Septem cum Commentariis, a compilation of the greatest works of the ancient Greek playwright Sophocles. Sophocles lived eight centuries before Eusebius, but like the latter, was a prolific writer. Unfortunately, most of his plays have been lost, or exist only in fragments. This edition was published in 1502. Two millennia after he wrote these plays, the first edition in the original Greek was finally printed! It contains works including Oedipus Tyrannus, Electra and Antigone. It was published by the Venetian press of Aldus Manutius. Aldus was noted for a number of developments, such as the invention of italic type, and the publishing of a more affordable book format, such as the new octavo format used for this book. As an aside to truth in advertising, though the title indicates it also contains commentaries, none were provided in this edition. $20,000.

Here is a relatively new book – The Grave, A Poem, published in 1808. The poet was Robert Blair, this being one of only three he wrote (one was was a translation and the other a tribute to his father-in-law). This is his masterpiece, and it was fairly popular in its time, an example of “graveyard poetry,” where visiting a cemetery leads to important, religious philosophizing. The Biographical Dictionary of English Literature describes the work as “a poem in blank verse extending to 767 lines of various merit.” However, it is not the poem, which was written in 1743, that is the greatest appeal of this book. It is the illustrations. Publisher Robert Cromek commissioned William Blake to create 40 images for his deluxe, folio edition. From those, he selected 20 which were used. There is also a portrait of Blake himself in the front. Interestingly, the originals of Blake's art for 19 of these illustrations disappeared from sight after an auction in 1836, and were “lost” until being rediscovered just a few years ago. They were put up for auction individually in 2006, an auction that angered many because it meant the collection would be permanently broken apart. Eleven were sold for $7.1 million. The book is available for a more modest price of $800.

Probably no one wrote more words than Samuel Johnson, except maybe Noah Webster. We don't mean the most in total quantity, but the most different words. Johnson was a lexicographer, and his 18th century English dictionary was a vast improvement over anything that existed before. Along with his wordsmithing, Johnson is remembered as a wit, thanks to the detailed biography created by his younger friend and admirer, James Boswell. In 1775, the two took a trip to Scotland. Though 30 years older than Boswell, Johnson had done little traveling before, while Boswell had explored Europe. Johnson wanted to see Scotland, a very rural place by current standards, but even then Johnson feared that it was quickly losing its traditional character. Offered is a copy of Johnson's A Journey to the Western Islands of Scotland, published in 1775. Interestingly, Boswell also wrote an account of their trip, though his account was more focused on Johnson. $1,000.

Johanson Rare Books may be reached at 410-243-0700 or info@johansonrarebooks. Their website is www.JohansonRareBooks.com.