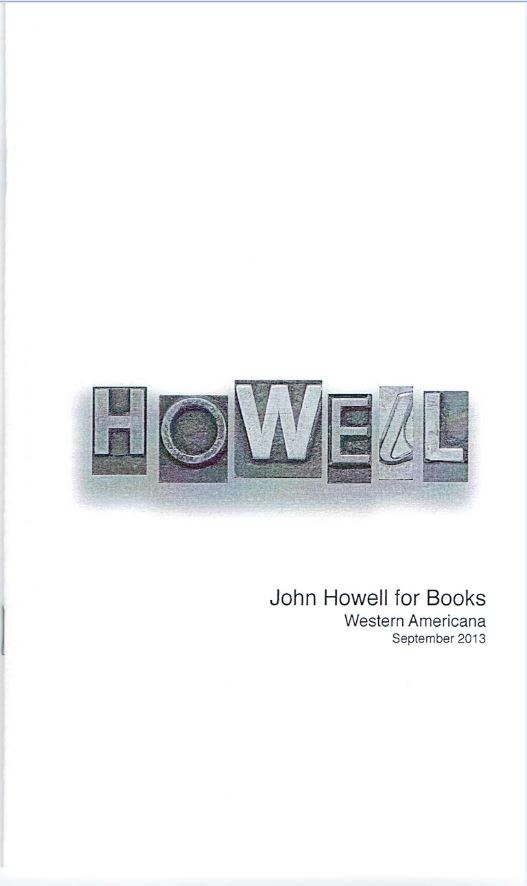 John Howell for Books released a catalogue of Western Americana. Howell is based in Los Angeles, so not surprisingly, most of these western titles come from the Golden State. The time frame is primarily later 19th to early 20th century. Much of the material is ephemeral in nature, including promotional brochures for favored tourist spots of another time. Here are some of the items being offered.

We start with an early promotional piece for the planned community of Atascadero, California. Atascadero is located midway between Los Angeles and San Francisco, a bit inland from the Pacific coast. The pamphlet is titled The Appeal of Atascadero, and was published by Astascadero Estates in 1922, just a decade after colorful and controversial developer Edward Gardner Lewis came west to build a utopian style community. Lewis had made his fortune (which he later lost) in publishing and had built a community in Missouri before heading to California. This pamphlet contains 62 photographs of the young community, and was intended to bring in new residents and tourists, anyone who wished to leave a few bucks in this still appealing community. Item 3. Priced at $150.

Item 24 recalls a war in California in the 1920's, which while no longer a war, still wages ongoing skirmishes to this day. The publication comes from 1925, the height of the California Water Wars. The cover title is Letter of Transmittal and Report of W. F. McClure, State Engineer concerning the Owens Valley - Los Angeles Controversy to Governor Friend Wm. Richardson. The inside title is Owens Valley – Los Angeles. Report Made...Following the Opening of the Alabama Hills Waste Gates of the Aqueduct by the Valley People on November 16, 1924. Actually, valley girls and boys didn't just open the gates. They dynamited part of the system. As Los Angeles realized it would need more water to grow, it set its sights on the Owens River Valley, far to the east, but high enough to support a gravity-fed aqueduct. The city began buying up water rights in the Owens Valley, built an aqueduct, and began drawing the water away. The result was the land of remaining farmers began to dry up as the surface water disappeared, and the water table sank. Eventually, in late 1924, some local farmers blew up part of the system so the water would once again flow through the Owens River. Naturally enough, it would be a futile battle for the farmers against the powerful big city, and within a few years, Owens Lake was dry. Today, battles over water go on as California finds itself in the midst of a serious drought, with not enough water to go around. $550.

Here is another ongoing controversy, even more so today: Survey of the Mexican Labor Problem in California. It was published by the California Development Association, forerunner of the Chamber of Commerce, circa 1928. Though this was a conservative business organization, they were all for immigration from Mexico. Their purpose was to dissuade Congress from imposing quotas on immigrants from Mexico. Their reason was simple economics – they needed labor to work in the fields. Item 4. $100.

This next pamphlet is not about a California native, but about a visitor: The Story of Captain: The Horse with the Human Brain. Despite that description, it appears that Captain actually was a very smart horse. He supposedly could do math tricks, evidently tapping his foot to give answers. He also could match colors, operate a cash register, and play musical instruments. Captain was owned by Capt. Walter A. Sigsbee, a Wisconsin native who performed his act at fairs in the Midwest. The two captains came by train to California, and performed at the expositions in San Francisco and San Diego in 1915. They must have stuck around as this pamphlet by George Wharton James was published in Pasadena in 1917. James was a popular nature writer, evidently impressed by this unnaturally smart horse. Item 16. $85.

Even a state as beautiful as California has its downsides. Here is an account of its most famous one: List of Recorded Earthquakes in California, Lower California, Oregon, and Washington Territory. That description of Washington as a territory means that this must be a fairly old publication, and indeed it is, coming from 1887, two years before Washington was admitted to the Union. Edward Holden used the resources available to him, such as newspapers, journals, private records, and verbal accounts, to compile a list of known earthquakes dating back to 1769. Of course, many more have been added to the list since 1887, but this is a good account of the sketchier early records of seismic activity along the west coast. Holden was an astronomer, first Director of the Lick Observatory east of San Jose, where he set up a seismograph. He also was serving as President of the University of California at this time. Item 11. $150.