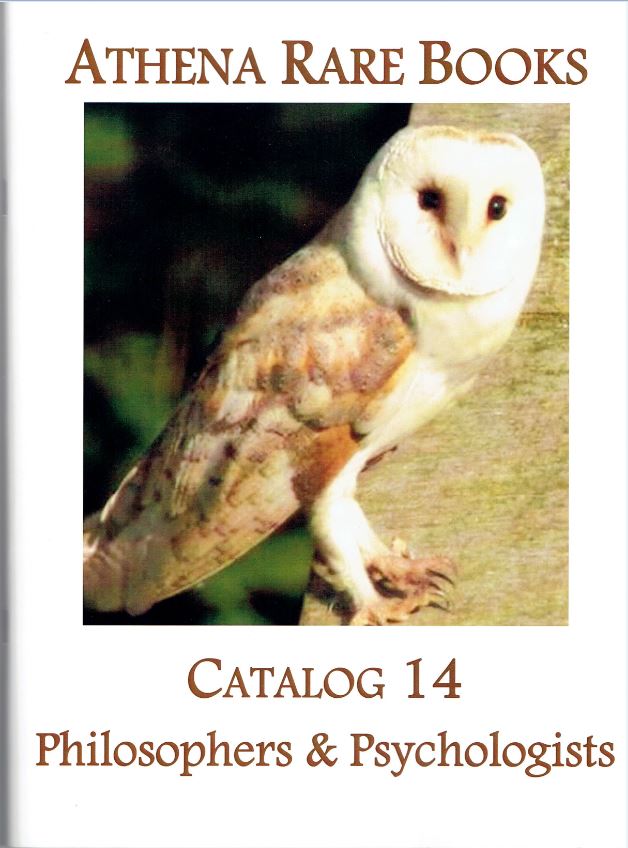 Athena Rare Books of Fairfield, Connecticut, has released a catalogue on Philosophers & Psychologists, their Catalog 14. There is not a lot of light reading in this catalogue. Athena specializes in the history of ideas, and history does not focus on the small stuff, but the big ideas. For those up to the challenge of understanding how the greatest minds of the past saw themselves and their world (fully recognizing that great minds aren't always great at writing easily understood language), this catalogue will start you on your quest. Put on your thinking caps before entering.

John Locke described his revolutionary ideas about human understanding in his seminal work, An Essay Concerning Humane Understanding (we would say human understanding today) in 1690. Item 35 is a first edition, first issue of this important work. Locke challenged the prevailing idea of the time that we were born with some sort of knowledge. Rather, he saw newborns as a “blank slate,” awaiting knowledge to be imparted into their minds from their surroundings. This placed Locke firmly into the newly developing empiricist tradition, that we learn from perceptions and experience. This philosophy had wide-ranging practical impacts. Scientific theory, the learning of scientific concepts through observation, trial and error, as opposed to determining them from some innate logic, enabled us to learn from experience, and advance our understandings from what we learned. On the political side, the “blank slate” theory implied that we all start out the same or equal, a concept employed in the Declaration of Independence – all men are created equal. Priced at $70,000.

Here is a philosophical work that is much more readable and entertaining than the typical book of philosophy. Candide, the great work of French Enlightenment philosopher Francois Voltaire, is a biting satire of the religious/philosophical belief of Optimism, that we live in the best of all possible worlds. Rather than an erudite discussion of the philosophy, Voltaire ridicules the theory with the story of the naïve young protagonist, Candide. Candide is taught Optimism by his tutor, the appropriately named Pangloss. However, Candide suffers the most excruciating series of horrors - wars, storms, earthquakes. All the while, Pangloss keeps reiterating that these things are for the best, until the whole philosophy becomes absurd. Ultimately, Candide ends up working a farm, concluding that what is best is to tend his garden, rather than search for answers to incomprehensible mysteries. Item 45 is a true first edition, first issue, published in 1759. Finding such a true first is difficult as some 20 issues are dated 1759, many of which were pirated. The book was an enormous success right from the start. $50,000.

This next item takes us into the realm of logic, mathematical precision to be precise. The book is Symbolic Logic, by John Venn, published in 1881. It deals with set theory, new at the time, but is notable most for its diagrams. It was John Venn who developed the well known Venn Diagrams, such as the classic intersecting circles. One is A, the other B, and in the area where the two intersect, those elements have the characteristics of both A and B. Item 44. $750.

Here is an item that may sound more like a science book, and it is, and yet it had a greater impact on the way we see ourselves than perhaps any other book ever written. Item 3 is Charles Darwin's On the Origin of Species by Means of Natural Selection... Offered is a second edition, second issue, published in 1860, the year after the first. Naturally, this book totally changed our understanding of from where we came. Darwin had served as the naturalist on a scientific expedition to Patagonia, publishing a volume on what he found as part of the official account in 1839. However, he had not yet developed his theory on why species isolated from each other gradually developed different characteristics. By the early 1840's, he had developed his theory of evolution, but between fear of controversy and other work he found important (barnacles!), Darwin did not publish his conclusions. It was not until 1858, when Darwin learned that Alfred Russell Wallace had independently reached similar conclusions, that he realized he needed to publish his own findings. $15,000.