Books (and Appraisals) Offered by Charles A. Goldsmid 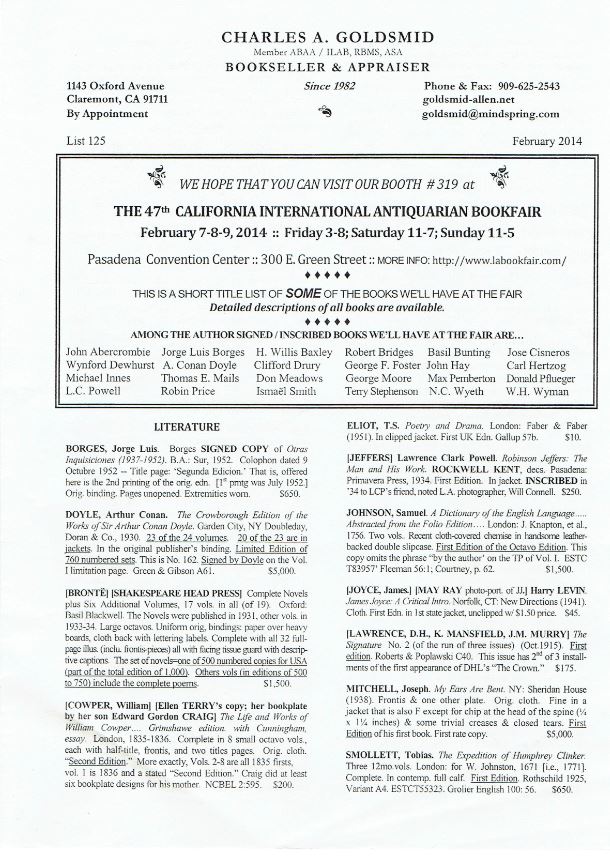 Some books for the fair.

Here is a look at a list of books issued by Charles A. Goldsmid of Claremont, California, for the recent California Antiquarian Book Fair. Goldsmid was an academic and collector who made the transition to full-time bookseller over a quarter of a century ago. After many years of running a retail shop in Claremont, he has since further transitioned from bricks and mortar to personal selling and his other major vocation, book appraising. Goldsmid carries over 150 hours of formal training, along with loads of experience in appraisal, be it for tax, insurance, estate division, legal actions, or for buying and selling purposes. His appraisals range from single books to complete collections. However, for this review, we are focused on his book selling role, with these being a few of the items he currently has for sale.

We start with the first book from an unusual writer, not as well known as perhaps he should be. Actually, he may be the second best known writer named “Mitchell” to emerge from the late 1930's, but a distant second to that southern lady. Joseph Mitchell arrived in New York in 1929 from the South, becoming a reporter for a couple of the city's thriving newspapers of the era. He reported on crime, which led him to writing, not about the rich and famous, but the down and out, the odd and eccentric. The New York Times, in his obituary, said Mitchell wrote about, “flops, drunks, con artists, panhandlers, gin-mill owners and their bellicose bartenders, at least one flea circus operator, a man who sold racing cockroaches, a bearded lady and a fast talker who claimed to have written nine million words of "An Oral History of Our Times" when, in fact, he had written no words at all.” In 1938, he moved to The New Yorker, and for most of the rest of his life, he was a writer for that magazine. In 1938, he also published his first book, here offered, My Ears Are Bent, a compilation of articles and sketches he had written in the preceding decade. His last book was published in 1965. It is about Joe Gould, the man with the 9-million word oral history he never wrote at all. It seems that Joe had writer's block. However, it appears that Mitchell was also writing his own biography. After 1965, he never wrote anything of substance again, though for much of the remaining 30 years of his life, Mitchell continued to go to work at the The New Yorker, holed up in his office, possibly attempting, but not succeeding at producing something new. Priced at $5,000.

There was never an auction sale quite like this one. Robert Hoe was in the printing press business, so it certainly was logical that he would become a book collector. However, the size and value of his collection was unprecedented, certainly in America. Hoe died in 1909, and two years later, his library went up for auction. Its value was several times as large as any other American collection that had ever been auctioned before. Offered is the Catalogue of the Library of Robert Hoe of New York, eight catalogues (bound in four volumes) published in 1911-1912. More than 4,000 lots were sold at Anderson Auctions. These copies have the realized prices bound in, and they would make some incredible deals if you weren't a century too late. $500.

Next we have one of the major works of the 18th century liberal American theologian Charles Chauncy. Great grandson of an early Plymouth preacher and Harvard President of the same name, this Charles Chauncy was minister at the First Church in Boston for 60 years. He split with several of his compatriots at the time of the First Great Awakening. He was not fond of the emotionalism of the movement, seeing delusion and spiritual pride within it. He believed in universal salvation and a benevolent rather than angry God. Offered is a copy of his book from 1784, The Benevolence of the Deity, Fairly & Impartially Considered. Chauncy's view led him to oppose control by the Anglican Church, making him a supporter of the America Revolution. $100.

Richard Burton was one of Britain's greatest explorers, though he didn't captain ships with large crews for long voyages. He primarily acted alone, at times reaching destinations few from the West had seen. He was one of the first non-Muslims able to visit Mecca, disguising himself as a pilgrim. It required learning much detail about Islam, traditions, and language to pull it off. Burton also explored the upper reaches of the Nile River, and even the Mormon settlement at Salt Lake, but most of his travels were to the Near East. This item is Unexplored Syria, published in 1872. Burton was serving as consul in Damascus when he and co-author Charles Drake decided to do some exploring of the backwoods, or back deserts, of a land that was then less dangerous than it is today. $1,000.

You may reach Charles A. Goldsmid Bookseller & Appraiser at 909-625-2543 or goldsmid@mindspring.com.