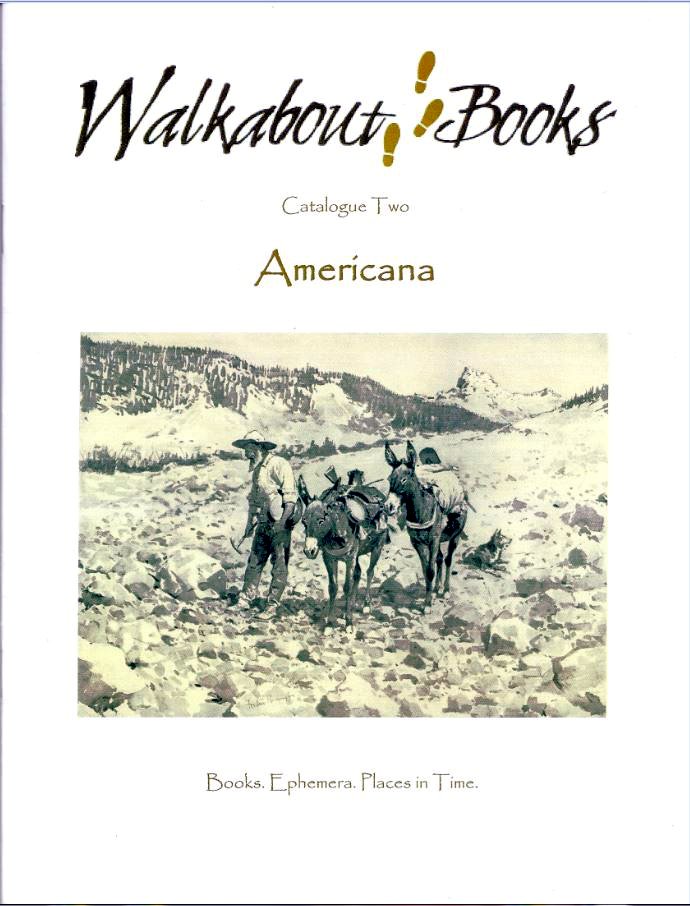 Walkabout Books of Laguna Niguel, California, has issued their second catalogue, appropriately enough titled Catalogue Two. Americana. Offered is a great selection of modestly priced items relating to America, mostly from the 19th or early 20th century. With a very few exceptions (over and under), items are available for three figures, generally lower three figures. Nevertheless, it is filled with fascinating pieces, including numerous selections relating to California locales, the Alaska Gold Rush, treatment of America's natives, slavery and abolition, and western travel. Many other American topics are also to be found. Here is a scattered sample of these works.

Who would ask a doctor for medical advice when you can turn to a cowboy instead? The answer is too many gullible Americans. Item 52 is a 48-page production from the “Cowboy Herbalist,” one Charlie White-Moon (real name Charles Bunce). You know the story – saved by Indians, Charlie lives with them and learns their secret remedies, which he now offers to dumb white people. Newspaper records indicate his cure, known as “Com-Cel-Sar,” was promoted during the teens, and this one fits in, dated 1912. The title is The Cow-Boy and Com-Cel-Sar. Charlie liked hyphens almost as much as he liked money. Presumably, “Com-Cel-Sar” is some sort of Indian word, though I find it in no dictionaries. This product combines roots and herbs to create a cleansing tonic that rids the body of “useless matter, undigested foods and the like.” Sounds like it probably had some mild laxative properties. However, it is dubious that it had much effect against disease. Priced at $75.

Wilson Lumpkin was a successful political figure in Georgia during the first half of the 19th century. Along with serving as a state representative, he earned terms in the U.S. House, the U.S. Senate, and two terms as Governor of Georgia, from 1831-1835. His positions undoubtedly made him a popular man at the time, but those who come across his name today will more likely look back at his career in disgust. He accomplished a number of things through the course of his life, but that for which he was most proud was his role in the forcible removal of the Cherokee and other Indians from their ancient homelands in Georgia. He sent them to far off Oklahoma, the horrific Trail of Tears. It is likely no other man played a greater role in this tragedy. He was an early advocate for Indian removal, a prime mover in passing such legislation, worked closely with Andrew Jackson in his shameful support of removal, ignored the U.S. Supreme Court ruling protecting the Indians' rights to their land, and after his term was over served on the commission to enforce the “treaty” signed by a small group of Cherokee consenting to removal, and guarded its final stages in the senate. Of course, he always claimed this was for the good of the Indians, as did Jackson, even as he held the lottery which gave away Indian land to white settlers. Item 29 is The Removal of the Cherokee Indians from Georgia, Including His Speeches in the United States Congress on the Indian Question... This is a two-volume set, one of 500 copies, compiled by Wymberley Jones DeRenne from Lumpkin's manuscript and published in 1907, several decades after the Governor died. $600.

Item 92 is Dissolution or Physical Death, and How Spirit Chemists Produce Materialization, by Michael Faraday. No, it isn't by Faraday. Poor Michael Faraday. He was one of the great scientists, a physicist and chemist who made numerous discoveries concerning electricity and magnetism. It is he who is responsible for the electric motor and generator. What Faraday was not was a spiritualist. Indeed, he was a most vocal opponent, and devised experiments to show how reputed visits from spirits at seances were false. So, after Faraday died in 1867, he became something of a target for spiritualists, who reported having visits from the deceased scientist. This is one such example, published in 1887. In it, the spirit of the departed Faraday supposedly comes back to tell us how we can live after our bodies have died. $100.

Item 22 is a rare early issue of San Francisco's first newspaper, and California's second. It is Vol. 1, No. 7 of The California Star, dated February 20, 1847. It tells news of what was then a lightly populated land of uncertain ownership. The U.S. military had seized it from Mexican control, and settlers from America had also participated, but the Mexican War was still ongoing at the time, and California had been Mexican territory. Nonetheless, the Americans were in control. The Star had its editorial viewpoint, critical of Governor Robert Stockton. It describes him as a “pompous, bloated, demagogue.” It is more favorably inclined toward his military rival, General Stephen Kearney. The paper includes numerous articles of local news, but perhaps the most intriguing item is a small classified advertisement. It was placed by John Sutter. It is a want ad for “two Thrashing Machines for wheat of a size and sufficient power for a crop of some 40,000 bushels.” Soon enough, Sutter would discover something far more interesting than wheat on his farm. Within a year, gold would be discovered near Sutter's Mill, and the California Gold Rush was on. $3,500.