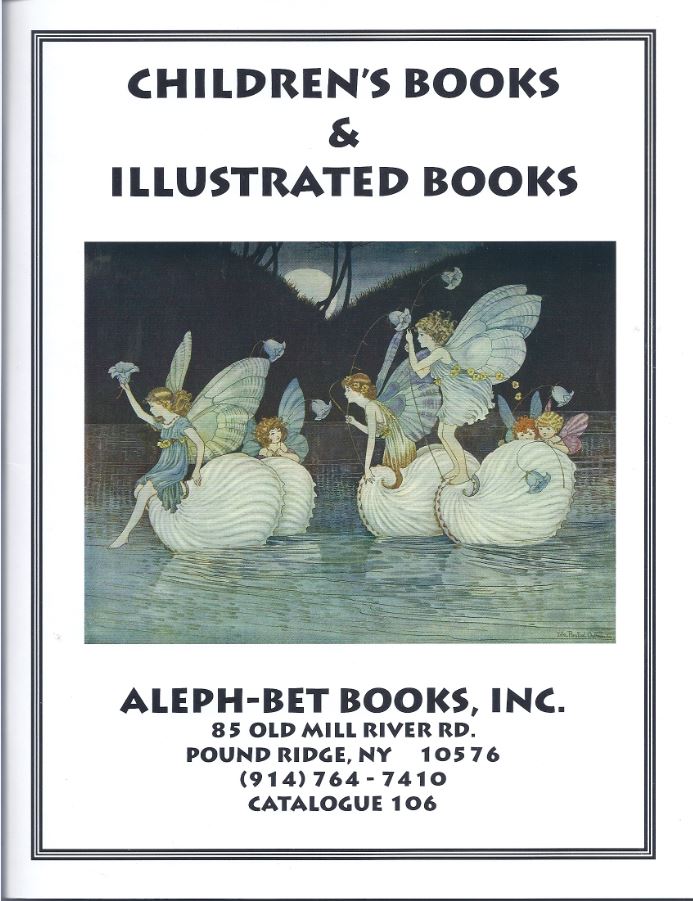 Aleph-Bet Books recently released their Catalogue 106 of Children's Books & Illustrated Books. With few exceptions, most books offered are both. This catalogue is slightly different from the typical Aleph-Bet catalogue. There are 500 items offered instead of the usual 600, but that is made up for with Helen Younger's updated list of the 100 most collectible children's books. She originally composed the list 20 years ago. Some changes have been made as a few books are no longer in as high demand, while some more recent titles, favorites of today's collectors when they were young, have replaced them. One thing I immediately noticed about this list is how many of them I have read. Sadly, I doubt the same would be true of the top 100 books for adults. No wonder children's books are so highly collectible. They bring back memories. Here are a few of the 500 being offered for sale.

We will start with a follow-up of the first American appearance of the popular Italian marionette, Pinocchio. The title appears a strange combination of titles – Pinocchio's Adventures in Wonderland. When originally published in Italy, the book was simply the Adventures of Pinocchio, but in America, publisher Jordan Marsh figured they could play on the popularity of Alice's Adventures in Wonderland, so they gave Pinocchio's neighborhood the same name. However, it is still Carlo Collodi's original work, translated to English. Jordan Marsh, a Boston department store that also published some books at the time, originally published this in 1898, as this book is dated. However, this version includes four color plates by Rene Quentin dated 1899 that were added the following year. As such, it is the first American edition of Pinocchio to contain color plates. Item 101. Priced at $1,200.

In the decade before the birth of Peter Rabbit (the 1890's), Beatrix Potter supplemented her income with drawings of animals in her inimitable style for other publications. She also drew more serious, scientific illustrations, notably of fungi. Rabbits and frogs were her favorite creatures for children's books. Among her pre-Peter illustrations were three full-page drawings, signed “HBP,” that appeared in Comical Customers at the New Stores of Comical Rhymes and Pictures, published in 1896. These accompanied a rhyme entitled The Frog Who Would A Fishing Go. The book also contains illustrations of cats by Louis Wain and W. Foster. Item 363. $2,500.

Along with all of this children's fiction, it's nice once in a while to find a “true” story. Here is one: Captured by a Gorilla. A True and Startling Account Received from Rev. John Onslow (pseud.) by the Late Rev. Dr. Livingstone. That would be the notable explorer David Livingstone, I presume, though at the time of this publication – 1867 – Dr. Livingstone may have been “late” for some of his appointments in darkest Africa, but was still quite alive. Perhaps the author assumed he was dead since he was out of contact with the outside world at the time. Stanley would set him straight. Returning to the account, this love-crazed gorilla was said to have abducted the beautiful daughter of an African gem dealer. Shades of King Kong. “Truth” is stranger than fiction. More likely, this was a bit of sensationalism intended to boost sales rather than inform the public about gorillas. Item 202. $350.