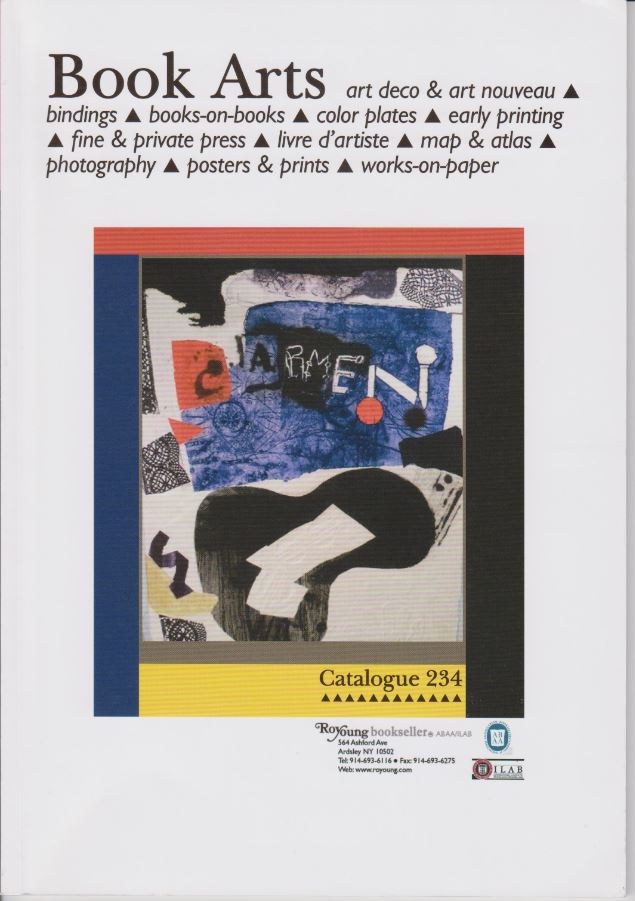 This month we received our first catalogue from Royoung Bookseller, of Ardsley, New York (just north of the big city). First, an aside about the name, which can be Royoung or RoYoung, but nothing we can do in textual type does the name justice. The logo has the “Ro” on a top line and the “oung” on a slightly lower line, with a larger “Y” in between. The result is your eye reads the name “Roy Young” without even realizing only one “Y” is present. So, think of the name as “Roy Young,” but only use one “y” when looking for the website.

This offering is Catalogue 234, or Book Arts. The full title, which is effectively an excellent description of what you will find, is Book Arts – art deco & art nouveau, bindings, books-on-books, color plates, early printing, fine & private press, livre d'artiste, map & atlas, photography, posters & prints, works-on-paper. With that description provided, we can quickly open up the pages for a few samples of the material inside.

There is no better place to start a discussion of book arts than with something from the Kelmscott Press. Item 136 is such a thing. It is Sir Thomas More's Utopia, a look at a world we would now describe as.... “utopia.” The book created a descriptive term. Originally published early in the 16th century, this edition rolled off William Morris' Kelmscott Press in 1893. It is printed in red and black and contains woodcut initials and borders throughout the text. Kelmscott would close down a few years later after a very brief run when Morris died, but its reputation lives on as the finest of the fine presses. Priced at $6,000.

Salvadore Dali is overwhelmingly known for his paintings, but his art was far broader than one genre, particularly in his younger years. He wrote film scripts, books, poems, and created sculptures along with his paintings, seeing painting as just one aspect of his inner self. However, surrealism flows along the different genres. Item 64 is a work of the poetic Dali, L'Amour Et La Memoire (Love and Memory). It was published in 1931. Dali must have had memory on his mind that year, which would be an important one for his paintings. It was also the year he painted his most famous work, Persistence of Memory, the one with the melted watches. $995.

Item 186 is a fun book for German children published circa 1890. It was the creation of Lothar Meggendorfer, whose specialty was movable or pop-up books. This one is titled Zum Zeitvertreib fur brave Knaben & Madchen. Ein Ziehbilderbuch (For brave boys and girls to pass the time. A picture book). It contains 8 colored plates with levers that allow parts of the picture to be moved. A series of interconnected cardboard levers sandwiched inside the page operated the movements. Finding older children's books in good condition is difficult, they having been used by children. Remarkably, all of the tabs with moving parts on this copy are working. Meggendorfer, whose movable books date from the 1880's and 1890's, was the best in the field. $2,000.

Item 4A comes from the first incarnation of the Gregynog Press: The Fables of Esope. Translated Out of the Frensshe in To Englysshe By: William Caxton. The excesses of the letter “s” and unexpected uses of “y” are a sign that the original dates back to the Middle Ages, but this fine press edition was published in 1931. This is copy number 56 of 250, and it features 37 wood engravings by Agnes Miller Parker. The first Gregynog Press was formed around 1922 by the Davies sisters, surprising operators for a fine press. It was not that they had any particular connection to printing, but that the estate they owned once had a press and they wished to renew the tradition. The success of their venture was surprising considering the obstacles. $3,500.

This next item is definitely a piece of ephemera, but it contains the artwork of the noted book illustrator Rockwell Kent, albeit in miniature. It is a framed set of 100 Christmas Seals for the year 1939. It features a female head with a halo on each stamp. Christmas Seals were introduced early in the 20th century, primarily used as a fund raiser to fight tuberculosis. That was their purpose in 1939. With TB mostly having been conquered, today they are used to fight other lung diseases. Item 147. $250.