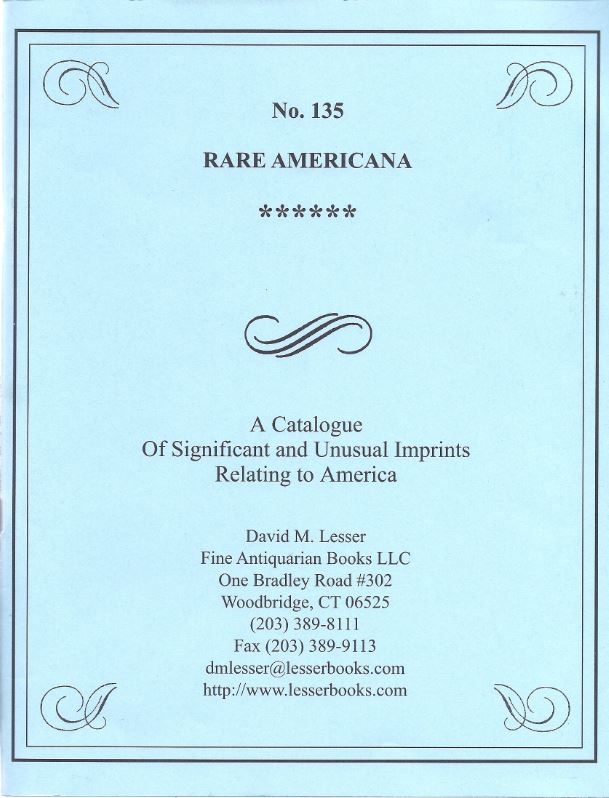 David M. Lesser Fine Antiquarian Books has reached a milestone - the bookseller's 25th anniversary in the business. The event is celebrated with the firm's catalogue No. 135 Rare Americana, almost one every two months on average for 25 years. Lesser never wants for material, and it is a most interesting collection for those fascinated by early American history. It includes books, but mostly shorter form pamphlets, broadsides, manuscripts, and such. The immediacy of the issues of the day is seen in these quickly published items, a window on events from before the Revolution to the decades just after the Civil War. Here are some samples.

In hindsight, this appears much ado about nothing, but at the time it was not, and author Charles Brockden Brown could not have foreseen what would soon happen. Item 16 is Brown's An Address to the Government of the United States, on the Cession of Louisiana to the French... published in 1803. Napoleon had forced the Spanish to agree to cede the Louisiana Territory to them in 1800. This caused much concern in America, not only for Brown, but for President Jefferson and many others as well. Spain was weak, but France was strong, and a powerful European power returning to a major presence in America was deeply troubling. Jefferson sent diplomats to France to discuss the purchase of New Orleans. It was not so much the vast territory of Louisiana that concerned Jefferson as France's ability to block an increasing volume of American shipments from its western territories through the port of New Orleans. Brown went even further, urging the U.S. to seize New Orleans from the French. “France is to be dreaded only or chiefly on the Mississippi,” he writes. “The deadliest of blows from that nation must come from that quarter. To prevent their entrance, therefore, is the most urgent measure of defence... The government must not hesitate.” From hindsight, we now know that Napoleon had become focused on battling England and taking control of Europe, not America. He not only was willing to sell New Orleans, but offered the entire Louisiana Territory to America for a cheap price. Priced at $500.

It is doubtful that printed sermons would have a great readership today, but they must have been popular in America a couple of hundred years ago as so many were published. Item 8 is A Sermon Preached September 29th 1771. By John Bacon... He had just been installed as a pastor at the South Church in Boston, and he gave the parishioners a good reason to love God. He explains, “The sum of the law is, to love God with all the heart, and that on the penalty of damnation.” $175.

Charles Sumner was an ardent and important abolitionist, a senator from Massachusetts who once was beaten on the floor of the senate to within an inch of his life as a result of a speech attacking the slave practices of South Carolina. It took three years before he was able to return to the senate. He returned as he left, a vocal abolitionist and later Radical Republican during Reconstruction. Where did he get such strong views? Those who follow Sumner's career will be interested in this item: The Compass: A Poetical Performance at the Literary Exhibition in September, [1795], at Harvard University. Charles Sumner had not even been born in 1795, nor would he be for another 16 years. However, the poet-speaker was Charles P. Sumner, the illustrious senator's father. His father hated slavery too, even back in this era when few objections were being raised. “No sanction'd slavery AFRIC's sons degrade, / But equal rights shall equal earth pervade,” he writes. Like father, like son. Item 129. $600.

Poor Maggie Keppel became a case study for Landon Carter Gray, though it is hard to fathom why he was quite so fascinated by her. Item 57 is Dr. Gray's The Case of Maggie Keppel, The Brooklyn Child-Abductor. Read Before the New York Society of Medical Jurisprudence, January 11, 1883. Gray first became interested in her case when Ms. Keppel was serving a jail sentence for “the heinous crime of stealing a small towel in the house wherein she was boarding.” I'm not sure anyone would classify that as a “heinous” crime except, perhaps, those who operate hotels. Dr. Gray concluded that Ms. Keppel was insane, and when she was released, she promised to come to the good doctor for treatment, but only came twice. Lo and behold, his next encounter with Maggie came when “the whole world was startled by the story of the abduction of a child that had been playing in front of its parents' house.” Alas, the abductor “turned out to be my quondam patient of towel-stealing fame, the unfortunate Maggie Keppel.” Aside - “quondam” means former. Maggie explained that she found the child crying in the street and merely sought to bring her home. Dr. Gray wasn't buying her explanation, describing “the dangerous tendencies of such a lunatic as Maggie Keppel, who in another phase of her malady, might have murdered the child as readily as she had stolen it.” However, the jury believed Maggie, not Dr. Gray, and acquitted her. $500.

Item 7 is the Life and Adventures of Jeff. Davis. By McArone, published in 1865. “McArone” was George Arnold, who died the same year at the age of 31. Arnold was a humorist who wrote for numerous magazines. This publication includes accounts of Davis' life and comic illustrations as one might expect to be targeted at a defeated foe. Arnold calls Davis' birth “a misfortune alike for him and for society at large.” He describes one of Davis' skills as “negro raising,” and naturally enough, makes illustrated fun of claims that Davis was captured wearing women's clothing. $875.