Antiquarian Books from the Continent from Librairie Thomas-Scheler 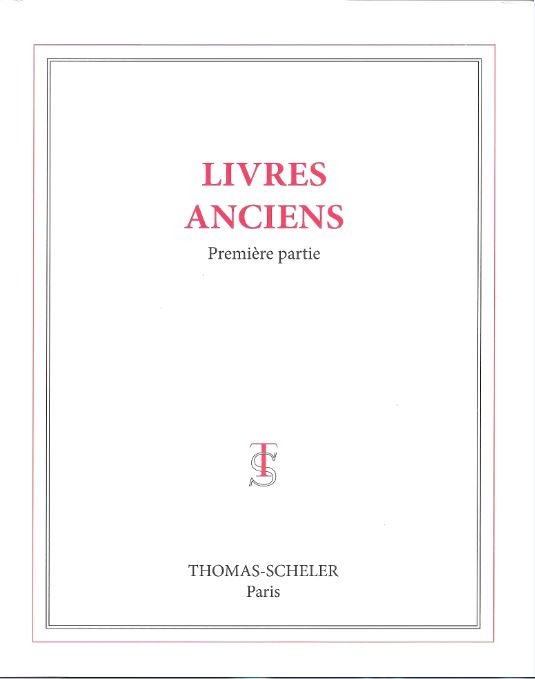 The first part of Livres Anciens.

Librairie Thomas-Scheler has issued a catalogue of Livres Anciens, Première partie A à K. That is Antiquarian Books, First part A-K. A couple of things are clear from this title – there will be more catalogues in this series, most of the presentations are written in the French language, and the books offered are very old. To that we will add they are works from continental Europe, though the books themselves are not necessarily in the French language nor produced in France. Some, though European in origin, contain a connection to America for those on the west side of the Atlantic. Here are some examples of the items we found in this first part of the collection of antiquarian books.

Item 22 is one of the early editions of Don Quixote, the masterpiece of Spanish writer Miguel de Cervantes. It is the fifth edition, but was published the same year as the first, only six months later. Cervantes' work had achieved a significant degree of acclaim or notoriety even before it was printed, evidently having been circulated among the literati in manuscript form. The first edition was released in January 1605, printed in Madrid. With its reputation preceding it, the book sold out, with another edition being printed in Madrid as well editions from Lisbon, Portugal. This fifth edition came off of the press in mid-July of 1605, having been printed in Valencia. Priced at €95,000 (euros, or approximately $129,650 in U.S. currency).

This next item is a major eyewitness account of the conquest of Mexico and the Aztec empire, Historia Verdadera de la Conquista de la Nueva Espana, by Bernal Diaz del Castillo. Diaz journeyed to the New World in hopes of making a fortune, and after a couple of abortive attempts, joined up with Hernan Cortes in 1519 in the expedition that would change Mexico forever. Cortes tore through Mexico, crushing the Aztec empire that had dominated the land for centuries. Diaz witnessed much of what happened, but also consulted with others to create a detailed account of the conquest. His account was written in manuscript form fifty years later, but Diaz never published it. He died in 1584, somewhere close to 90 years of age. The manuscript remained in a library until finally published in this first edition in 1632. Item 40. €20,000 (US $27,291).

This next book comes from Italy, and while some may consider it a bit “wooden,” it is a good lesson in the value of telling the truth. This is a first edition of the book now generally referred to simply as “Pinocchio,” though the original title is Le Avventure di Pinocchio. Storia di un Burattino, published in 1883. The author was Carlo Collodi, though that was just a pen name for Carlo Lorenzini. Lorenzini had written and published satirical political journals for many years when he decided to use a fictional puppet to subtly express his views. Pinocchio first made his appearance in a weekly newspaper for children in 1880, before being published in book form three years later. It would take another nine years before the wooden puppet with an expanding nose would first be translated to English, later becoming a popular children's tale in America, co-opted for large scale distribution by Disney. Item 30. €75,000 (US $102,390).