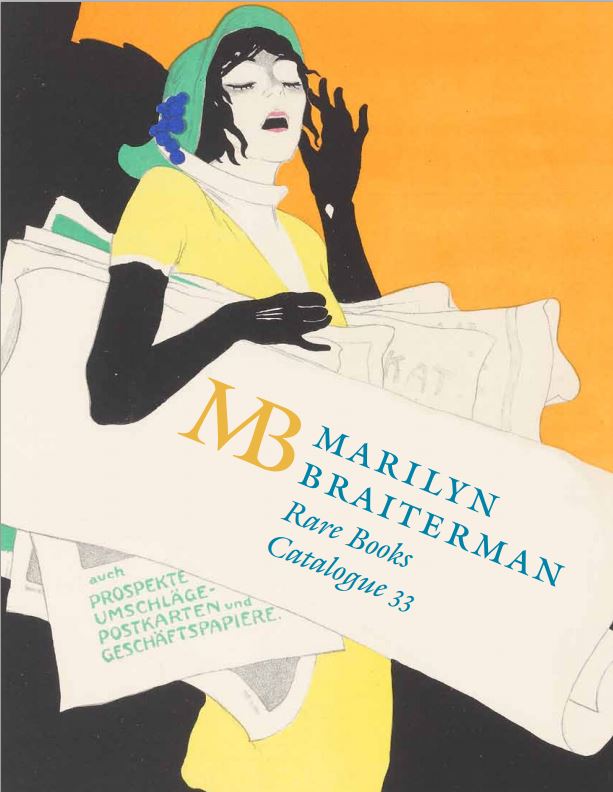 This month we have our first catalogue from Marilyn Braiterman Rare Books. This is Catalogue 33. Braiterman describes their specialties as decorative arts and design, architecture and landscape, press books and fine printing, 16th-20th century illustrated books, and Judaica. We can also put some national guidelines on this catalogue. There are American books, naturally enough for the New York bookseller, as well as English titles. From Europe, we find numerous titles in French, German, and Russian. It is an intriguing mix. Here are a few samples.

Item 3 celebrates the opening of one of the world's great architectural landmarks – the Empire State Building. Completed on the site of the original Waldorf-Astoria Hotel in 1931, it was for 40 years the tallest building in the world. Since then, buildings have grown ever taller, the Empire State now being fourth tallest in America and 23rd in the world. This 1931 publication, entitled Empire State: A Pictorial Record of its Construction, features an embossed white image of the building on its cover over a blue background. Inside is a pictorial and textual record of its construction, starting with the demolition of the old Waldorf-Astoria, featuring one color and 24 black-and-white drawings by Vernon Howe Bailey. Priced at $750.

Here is another architectural masterpiece located in New York, but that is about all these first two items have in common. Item 54 is an invitation to the Inauguration of the Statue of Liberty Enlightening the World by the President of the United States on Bedlow's Island, New York, Thursday, October 28, 1886. Liberty Enlightening the World, now better known as the Statue of Liberty, was the gift of the people of France to the United States for that nation's centennial a decade earlier. Sculptor Auguste Bartholdi's had conceived of the idea several years before the centennial, had picked out Bedlow's Island (later renamed Liberty Island) as a logical location, and had met with many Americans, including President Grant, to discuss the idea. It led to a massive fundraising effort, the building of the statue, its shipment in parts from France to the U.S., the building of its large base, and finally the raising of the statue. In October 1886, with President Grover Cleveland leading the ceremonies, the official inauguration was held. This invitation is inscribed by Richard Butler, Secretary of the American Committee, to George R. Turnbull, Second Vice President of the Guarantee Trust Co. It commemorates the alliance between France and the U.S., leading back to the American Revolution, and includes the poem The Bartholdi Statue by John Greenleaf Whittier. $1,500.

Item 36 is an odd piece from late 19th century French politics. Its title is Une Election a Tigre – Sur-Mer, an 1890 book pertaining to an election the previous year. It appears like a children's book, with cartoonish drawings of an abbot instructing a child, with a narrative by “Bob.” The author was “Gyp,” actually Countess Sibylle Riqueti de Mirabeau. She wrote many books under her three-letter name, revealing her far right political views. She hated democracy and republican government, idolized Napoleon, proudly described herself as an anti-semite, and would later become an anti-Dreyfusard, those opposed to reopening the case of the wrongful treason conviction of Jewish French military officer Alfred Dreyfus. The election discussed in this book was one where she campaigned for the Boulangiste candidate in the small village where she spent her summers. Georges Boulanger was a general and politician around whom various anti-democratic forces such as monarchists and Bonapartistes coalesced, as well as those seeking revenge on Germany. His supporters looked for him to overthrow the democratic government, and he might have succeeded, only he preferred to spend his time with his mistress. When his arrest was ordered, he fled the country, disillusioning his supporters, and in 1891 committed suicide on the grave of his mistress. $875.