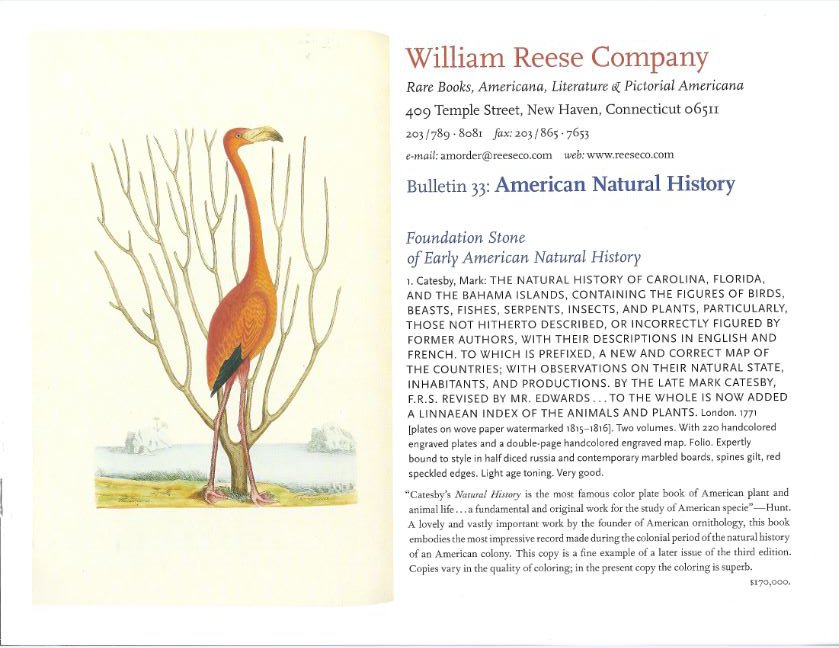 The William Reese Company has issued their Bulletin 33: American Natural History. This bulletin offers 34 works pertaining to the natural history of North America (and the Caribbean), with most related to the area now the United States. However, many items predate the creation of this nation, as books range from the 17th through the 19th century. These are important works, ranging from some of the earliest looks at New England, to some of the most spectacular color plate books ever printed in America. This is a collection of works meant for the finest collections of early American natural history. Here are a few selections.

We start with one of the earliest looks at American natural history, New England in particular, only a little more than a decade after the Pilgrims landed. Item 2 is William Wood's New Englands Prospect, a 1635 second edition, published a year after the first. Reese describes it as “the first detailed account of the animals and plants of New England, as well as the Indian tribes of the region.” It also describes its climate, settlements, and minerals, as well as providing advice to those seeking to make the ocean crossing. The second part is devoted to the land's natives. This copy includes the map, often missing from the book. It is the same as the map from the first edition except that the heading has had the year reset from 1634 to 1635. Item 2. Priced at $75,000.

Item 7 is Travels Through North & South Carolina, Georgia, East & West Florida, the Cherokee Country... This is a 1791 first edition of William Bartram's travels through the American South. Bartram, like his father before, was a botanist who traveled and wrote about the southern part of America. Bartram created numerous sketches of plants he discovered on his journey, and brought back specimens. He brought seeds for a tree found in one very small area. He named it the Franklin Tree for his family friend, Ben Franklin. This flowering tree is now extinct in the wild, surviving only through Bartram's seeds. Bartram also provides descriptions of the area's scenery and its Indian tribes, the Cherokee and Muscogulges in particular. $16,000.

Item 5 is a harmless enough title that led to the most infamous mutiny on the high seas: A Description of the Mangostan and the Bread-Fruit: The First, Esteemed One of the Most Delicious; the Other, the Most Useful of All the Fruits in the East Indies, by John Ellis, published in 1775. This book was the inspiration for transplanting breadfruit trees from the East to the West Indies, or the Caribbean, to feed the slaves. The breadfruit is large and filling, good for feeding a lot of people, but not, as the title implies, “delicious.” Ultimately, it wasn't even “useful” as the slaves refused to eat it. However, it was an attempt at transplanting the trees to the West Indies that led to the famous tale of mutiny. The mission of the Bounty, Captain William Bligh in command, was to move some of the trees to the Caribbean to feed the slaves. The mission was not a success as the mutineers forced Bligh and those loyal to him off the Bounty and onto small boats. Once free of Bligh and his mission, they promptly threw the breadfruit trees overboard. $13,500.