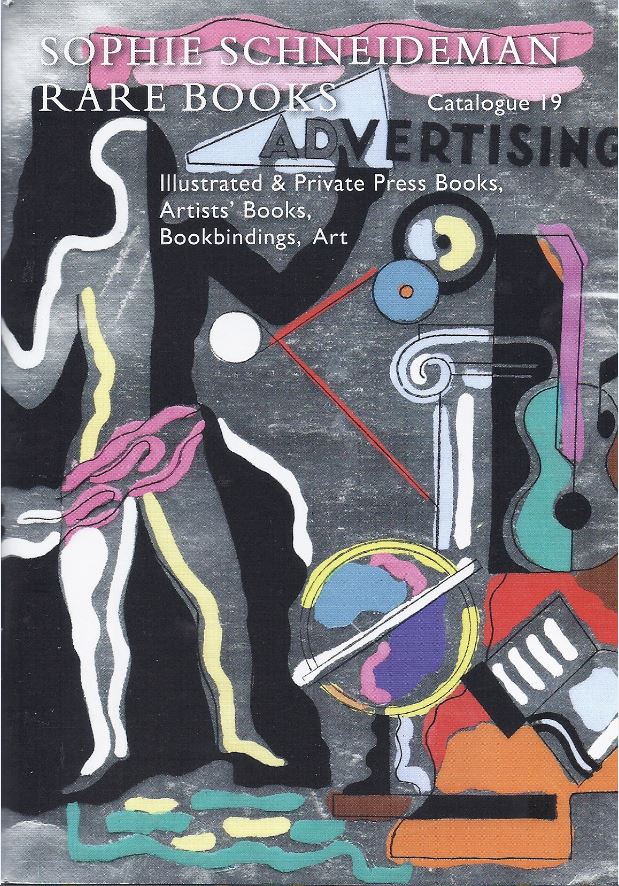 From Sophie Schneideman Rare Books we have received a copy of Catalogue 19. Illustrated & Private Press Books, Artists' Books, Bookbindings, Art. This is a selection of items that belong to the “book arts,” some being deliberately so, such as fine press editions of earlier titles, to others that are artistic even if that was not the original intent. Most of those created to be works of art date from the 20th century and come from private presses. Other works of artistic merit can be found dating back to the 18th and 19th centuries. These are a few of the items offered in this new catalogue.

William Morris is most noted for his brief but pioneering private press, the Kelmscott Press, that he operated during the last years of his life, in the 1890s. However, he had a long artistic career, both in terms of visual and written art, before he became a pressman. Item 101 is a copy of his epic poem, The Story of the Volsungs & Niblungs with Certain Songs from the Elder Edda, published in 1870. Morris was fascinated with ancient Norse peoples at the time, having translated several works from their original Icelandic. The saga is based on an ancient Icelandic tale. This copy was inscribed by Morris to his friend, the notable poet Algernon Swinburne. Priced at £2,400 (British pounds, or approximately US $3,922).

At the time Morris was creating his art, a young lady also from England was perfecting her artistic skills. This was Beatrix Potter, and her drawings were meant to appeal to children. With the turn of the century, she would add words to her illustrations, which generally featured anthropomorphic animals, rabbits in particular. Everyone knows Peter Rabbit, but she wrote many other stories featuring humanized rabbits and other fauna. Item 39 is a collection of 16 of Potter's books, most first editions, most published between 1903 and 1913. Peter isn't here, but among the tales included are those of Benjamin Bunny, Squirrel Nutkin, Jemima Puddle-Duck, Tom Kitten, Little Pig Robinson, and the Flopsy Bunnies. Each of these copies was signed on one date late in Ms. Potter's life – August 23, 1941 (she was 75 at the time). £29,000 (US $47,400).

Item 9 is a copy of a special copy of explorer Richard Burton's translation of The Book of a Thousand Nights and a Night and Supplemental Nights (16 volumes of what is commonly known as The Arabian Nights). The unillustrated first edition was published by Burton's invented “Kama Shastra Society” 1885-1888, but with two copies containing illustrated frontispieces and illustrations throughout. This edition was copied from the one that was originally presented to the Prince of Wales. It was made up from sheets originally used with the first edition, and must have been published around 1901 as it notes that the Prince of Wales is “now King Edward VII.” £13,500 (US $22,059).

This is not a book, nor even technically a “work on paper,” though it is akin to a photograph. It is an uncommon item with an unusual background. Item 36 is a collection of 64 photographic slides circa 1900 of different varieties of grapes and grape growing. A few show other farming scenes, including cherries, pears, livestock, and farm equipment. They were part of a traveling show put on by the U.S. Department of Agriculture. They had a railroad car set up to show these slides. It would visit various locales to instruct farmers in growing crops. These particular slides were likely used in presentations in California. £950 (US $1,552).

Item 18 is The British Herbal: An History of Plants and Trees, Natives of Britain, Cultivated for Use or Raised for Beauty. This is a 1756 first edition of John Hill's herbal, containing 75 plates displaying about 1,500 plant specimens. Hill was a prolific writer on numerous subjects, including books and regular contributions to periodicals. He even wrote a cookbook under a fictitious woman's name. He also found himself in numerous word battles with various people he believed wronged him in one way or another. While his personality did not always make friends, his botanical works in particular were well respected. £1,250 (US $2,043).