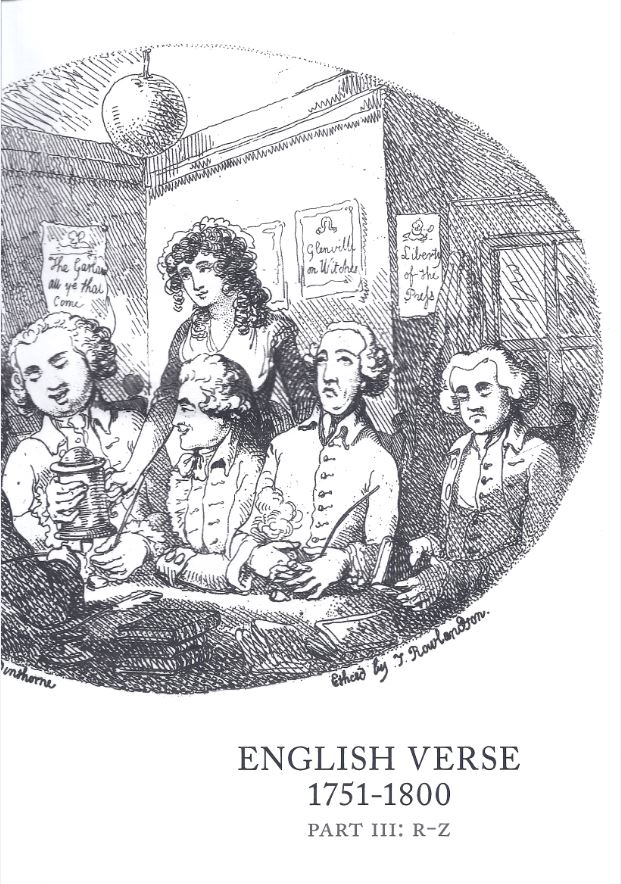 British booksellers Justin Croft and Simon Beattie have issued Part III: R-Z of English Verse 1751-1800. This is the final catalogue of items from a large, very targeted collection of James O. Edwards assembled over the past 20 years. With over 200 more items from the last third of the alphabet, this must have been one of the most complete collections of English poetry from the last half of the 18th century. As such, it contains names both familiar and not. Some is very good and critically acclaimed, other poems are not. All were welcome in this collection provided they met the requirements of the right time and place. Here are a few items from this concluding catalogue.

Mary Robinson had an impressive list of subscribers for her Poems by Mrs. M. Robinson, published in 1791. It included the Prince of Wales (future King George IV), Dukes of York, Gloucester, Orleans and more. It perhaps helped that she had a reputation as a courtesan and for a while the Prince's public mistress. Mary Robinson did not have an easy life. Born poor, she married a man who supposedly had some money but did not and was a spendthrift with the money she earned. Mary first ran a school and later became an actress. The latter earned her the nickname “Perdita” for a role she played, along with the attention of the Prince of Wales. After splitting from her husband and being dropped by the Prince, she had a succession of affairs, but an unfortunate illness left her partly paralyzed. Her poetical skills became important to her livelihood as she bounced from association with wealth to poverty, dying poor at the age of just 42. Item 23. Priced at £400 (British pounds, or approximately $657 in U.S. currency).

Anna Williams, who published Miscellanies in Prose and Verse... in 1766, also benefited from her connections. Her father knew Samuel Johnson, and with her sight failing, Johnson arranged for her to have an operation. It failed and she became blind. Nevertheless, she struck up a long lasting close friendship with Dr. Johnson, living most of her years from the 1750s through her death in 1783 in Johnson's household, with responsibility for managing it. Even as she became old, feeble, and difficult, Johnson made sure she was well cared for. This book of her prose and poetry contains an introduction and several works by Johnson, and is an uncommon and hard-to-find item for Johnson collectors. Item 166. £3,500 (US $5,756).

Here is another poetic Anna with a connection to a man with historic significance, though this probably wasn't so helpful to her literary career. Anna Seward wrote numerous volumes of poetry. Item 54 is her Monody on Major Andre...To which are added Letters addressed to her by Major Andre, in the Year 1769 (a “monody” is a poem lamenting the death of another). Andre had once been a suitor of Seward's adopted sister, and both were great favorites of her. Andre was a highly respected British officer, but he is known to history as the spy who worked with Benedict Arnold to gather intelligence from him. Andre met with Arnold as the latter's role was about to be revealed. Arnold escaped; Andre did not. Andre thought he would be held as a prisoner of war, but the Americans, still remembering the fate of Nathan Hale, treated him as a spy. The result was Andre would soon become a proper subject for a monody. Seward's poem was published in 1781, the year following Andre's hanging. Offered is a signed first edition. £900 (US $1,480). Item 55 is a signed second edition of this poem from the same year. £700 (US $1,151).

Theophilus Swift (whose parents were both cousins of Jonathan Swift) was an Irish barrister and writer who evidently had a bit of Irish temper. His son attended Trinity College, Dublin. However, despite his son being, in his father's opinion, “the brightest lad in all Ireland,” he did not achieve distinction in his examinations. Swift did what any good father would do. He wrote a lurid account of how the fellows of Trinity College had broken their vows of celibacy. Swift was sued for libel and sentenced to a year in prison. From behind those walls, he wrote Prison Pindarics; or, a New Year's Gift from Newgate. Humbly presented to the Students of the University, published in 1795. Swift was unreconstructed. This was a virulent satire about the college, with such lines as “'Curst be your College! Curst its Constitution!” Item 99. £800 (US $1,315).

William Roscoe was an historian, lawyer, banker, botanist, writer, poet, and probably several other occupations. He even served briefly as an MP in 1806 but declined to seek reelection. Roscoe was also a man of strong abolitionist beliefs. Item 29 is The Wrongs of Africa, a Poem, published in 1788, when he was still 25 years of age. This is a first edition of the second part. This section focuses on the horrors of the voyage from Africa to the West Indies. The third part was to cover how they were treated after arrival, but such was never published. In a case of good timing, his brief stay in Parliament years later coincided with the successful vote to end the slave trade, which he naturally supported. £500 (US $822).