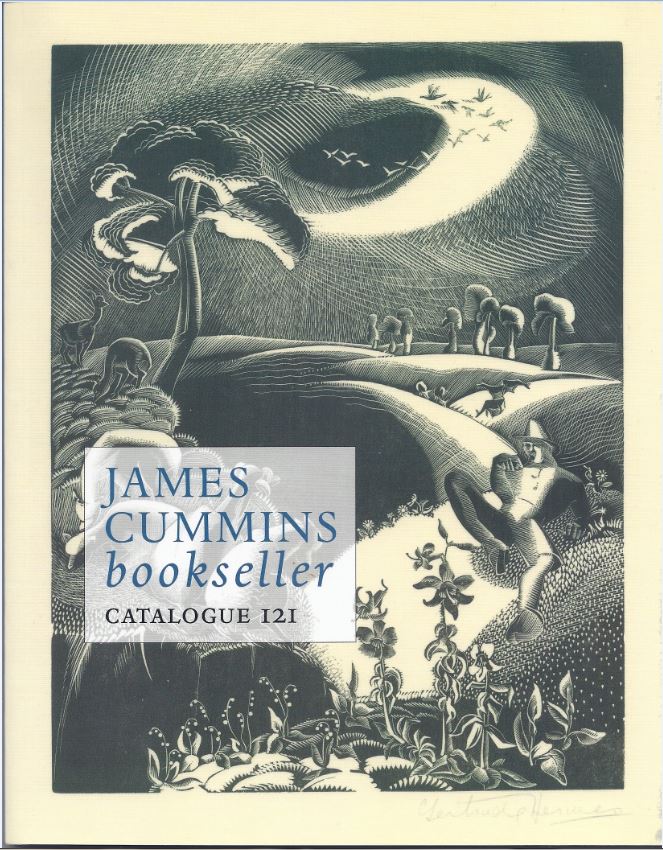 James Cummins Bookseller has released Catalogue 121. It contains a mix of books and manuscripts, covering a variety of subjects. Cummins features material that is important, rare, and in top condition. It is designed for those who collect at the highest level. Here are a few of these very interesting items now offered.

For those still fascinated by railroads, once the gateway to travel and adventure for regular folks, here is an outstanding book from England: Drawings of the London and Birmingham Railway, by John C. Bourne, with an Historical and Descriptive Account, by John Britton F.S.A. Bourne provided the illustrations, Britton the text. Published in 1839, The 34 lithographs display construction of the railway line from London to Birmingham at the dawn of railroading. It was a spectacular feat of construction, and the quality of this book matches the construction work. It was produced by Ackerman & Co., noted for the high quality of their printing. Item 6. Priced at $9,000.

Item 18 is a late in life letter from Mark Twain, but we will call him Samuel Clemens because this story begins before he adopted that pseudonym for his writings. At the age of 22, Clemens, still working on a steamboat, spied a young lady named Laura Wright. She was quite young – 14. Twain was evidently smitten, and the two spent three days together, evidently fond of each other without being terribly romantic. They shared some correspondence for several years, but other than a reported meeting when Sam was seriously discouraged by Laura's mother, they never met again. Nonetheless, Laura remained in Clemens' consciousness the rest of his life, and he had a recurring dream of an unidentified woman seemingly based on Laura. He never forgot her. Item 18 is a letter the now 70-year-old Clemens wrote in 1906 to his sister-in-law, Susan Crane. Crane was the younger sister of Clemens' wife, Olivia, and she remained close to her sister and brother-in-law all of their lives. Olivia died in 1904, but Sam and Susan remained in regular contact. In this letter, Clemens writes of that old romance, perhaps surprising since it is to the sister of his late wife. Writes Clemens, “Here's a romance for you! Forty-eight years, 2 months & 1 day ago I parted from a sweetheart who was 14 years old, & since then I have never seen her nor exchanged a word with her - & today I got a letter from her! (I remembered her hand.) She is poor, is a widow, in debt, & in desperate need of a thousand dollars. I sent it. Still, I am not bankrupt yet...” Clemens reveals something about himself, and to his wife's sister no less, in remembering the exact number of days since he had last seen Laura Wright, and the fact that he sent her $1,000, a very large sum of money in 1906. However, it appears that he had not been fully honest with his sister-in-law since they apparently did meet once again two years later, and they did exchange letters for some number of years afterwards. $4,500.

We can all sympathize with Charles Dickens when it comes to this problem. Item 25 is a letter Dickens wrote in 1869 to Joseph Sheridan Le Fanu. Le Fanu was an Irish writer most known for his gothic, mystery, and ghostly tales. Le Fanu had submitted an article for Dickens' periodical, All The Year Round. It was for Green Tea, a short work about spiritualism that Cummins describes as arguably his greatest work of short fiction. However, Dickens had a problem reading it, for reasons we can all understand. He writes to Le Fanu, “...I have safely received your MS and have sent it to the printer. I tried to read it in your writing, but could not succeed without devoting more time to the task than I could spare.” $7,500.

Item 31 is a collection of correspondence, primarily to James McLaughlin in 1890, though as late as 1898, during the time of the Ghost Dance. The Ghost Dance movement was a native spiritual revival, an Indian prophet preaching that taking part in the dance would revive the natives' good fortune. White settlers were afraid. They feared part of the Indians' hopes for a revival of their culture meant getting rid of them. McLaughlin was the Indian Agent for the Sioux Reservation in Dakota, and while he saw himself as sympathetic to the Indian, he still decided to bring in troops and clamp down on Sitting Bull and the Sioux. Perhaps some of these letters led him to act this way. One woman wrote, “...we are living in mortal fear at the present time of being surprised by the bloody Sioux.” A man says, “...there is quite a big excitement here over the Indian scare and my family has gone to safety...” Another says an Indian who went to Nevada to learn about the dance (that is where it started) had returned to start a Ghost Dance in McLaughlin's area. The rest is history – an army confrontation with the Indians, a misunderstanding, and then the slaughter at Wounded Knee, including the killing of Sitting Bull. $15,000.