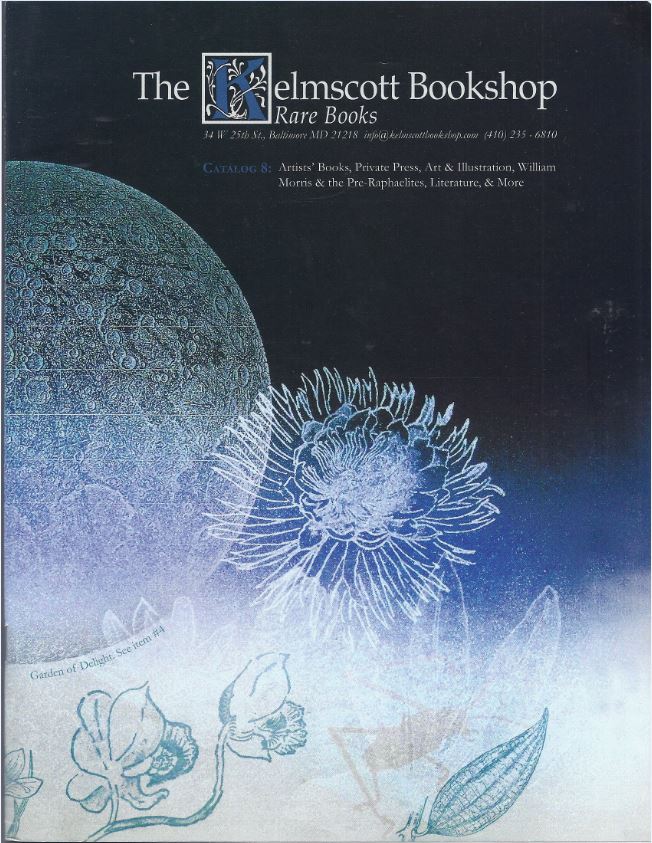 The latest from The Kelmscott Bookshop.

Recently issued was Catalogue 8 from The Kelmscott Bookshop Rare Books. Their listed categories are “Artists' Books, Private Press, Art & Illustration, William Morris & the Pre-Raphaelites, Literature, & More.” With that, and no need for further delay, we will open the pages of this catalogue and take a look at a few of the items inside.

There is no better way to start a Kelmscott Bookshop catalogue than with an item from the press for which the bookseller was named. Item 57 is the third book from the Kelmscott Press - The Love Lyrics and Songs of Proteus by Wilfrid Scawen Blunt... The Kelmscott Press was sort of the grandaddy of private presses and fine printing. There were others before, but Kelmscott brought back the tradition while taking it to a much higher level. William Morris only lived long enough for five years of production, and the Press closed two years later after finishing what he had started, but Kelmscott is still the standard for fine, private presses. This third book was published in 1892, and Kelmscott, the Bookshop not the Press, has a story to tell about it. Apparently, Blunt had recently concluded an affair with Margaret Talbot. One of the poems referred to that affair and Ms. Talbot wanted it suppressed. The result was 18 pages were removed and completion of the book delayed. Priced at $2,000.

The year after Kelmscott's William Morris died (1896), H. Buxton Forman wrote this bibliography and account of his works: The Books of William Morris: Described with Some Account of His Doings in Literature and in the Allied Crafts. Morris had a long career in printing, art, writing, and political thought before he started up the Kelmscott Press at the age of 57. Forman's bibliography covers his books, including many contributions he made to The Commonweal. Morris was a dedicated socialist. Sadly, Forman's name will always bear the tarnish of his association with the noted forger Thomas Wise, not revealed until almost four decades after this bibliography was published. Item 55. $250.

The Essex House Press was formed in 1898 as the Kelmscott Press was closing by C.R. Ashbee and Laurence Hodson. Their wish was to keep the tradition of Kelmscott alive, bringing in a pressman and compositors from Kelmscott. They also used the Kelmscott presses. Essex House printed 90 books during its 12 years of operation. Item 10 is their printing of Miss Kilmansegg and Her Precious Leg, A Golden Legend, published in 1904, number 142 of 200 copies. Thomas Hood had written his mock epic poem sixty-some years earlier. It is satire about greed and its dehumanizing effect. Miss Kilmansegg, a wealthy heiress with a name not coincidentally referring to the goose's golden eggs, is eventually beaten to death with her golden, artificial leg. $150.

This book could be said to have been thousands of years in the making. Item 23 is Signs from the Stone Age: Found in the Cave of Lascaux… This was finally concluded by Romano Hanni in 1988. Hanni has provided modern interpretations of prehistoric images found in the caves of France. Photographic reproductions of the original cave drawings are shown with Hanni's art. Item 23. $360.

Once in awhile, a book comes along that is truly original in its subject matter. Item 31 is Toilet Worship, by M.J. Bole, number 31 of 40 deluxe copies published in 2012. We are informed that Mary Jo Bole is a sculptor who also does installations. The book discusses varieties and uses of toilets, plumbing, advertising, related products, influence on popular culture, and other “interesting facts.” According to Bole, the book “collages fifty years of scatalogical meanderings, segues, tangents, & autobiographical intricacies of bathroom minutia.” It also has a fold out double-sided illustration with moving sand grains that, when tilted, “the sand moves to make it look like a man is drinking liquor in one image, and using the toilet in the other.” I can imagine what the first image looks like but am uncertain about the latter. $450.