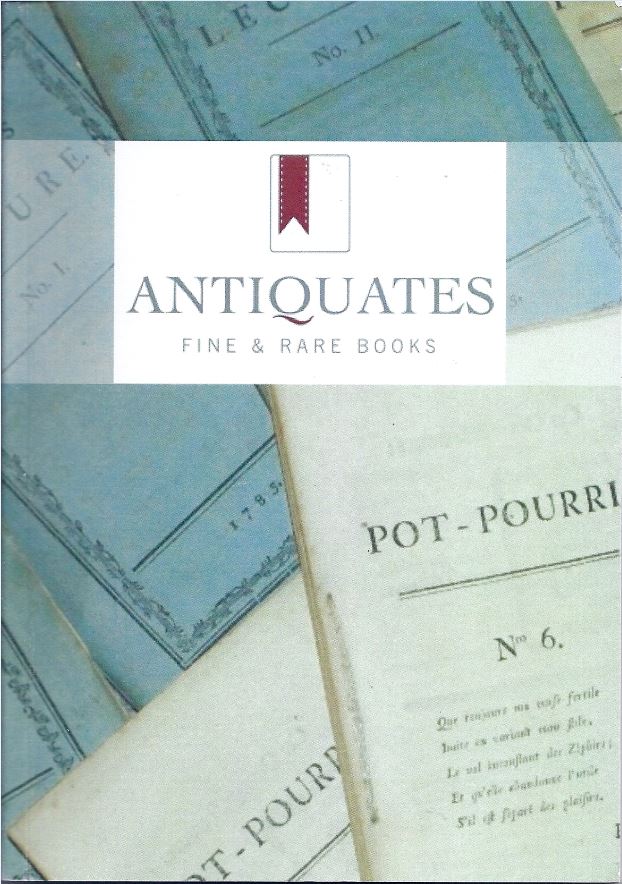 Antiquates Fine & Rare Books, the Corfe Castle, Dorset, UK based bookseller, recently issued Catalogue 6 – Antiquarian Books from the Sixteenth – Twentieth Centuries. Offered is a variety of material, most of it at least multiple centuries old, predominantly English material, both in publishing location and language, but with a very large selection of European works as well. The major subjects, as often for works of this age, are theology, government, politics, travel, and military. These are a few of the books and other works on paper you will find.

Much of the theological material is not very friendly toward the Catholic Church, as one might expect from English writings several centuries old. Henry VIII's wish to divorce his wife had a major impact on British theological thinking for centuries. Item 99 is A Present for a Papist: Or, the History of the Life of Pope Joan, From Her Birth to her Death, a second edition published in 1740. This supposed biography is little more than a not very thinly disguised attack on the Catholic Church. The author claims that not only was there once a Pope Joan, but that “Being hardly warm in her Papal seat, her piety gave place to her Leachery” as she gave birth to a child which caused her death. Deeper research into history has shown that Pope Joan never existed, let alone was a lecherous lady, but this book was meant more for propaganda purposes than serious scholarship. Priced at £350 (British pounds, or about $572 in U.S. dollars).

Here is some more religious material, but it is the provenance that is likely more interesting than the text. Item 92 is Seventeen Sermons, on Practical Subjects, by Joshua Parry, published in 1783. Presbyterian minister Parry, naturally enough, was around to give these sermons, though not to see them published, his having died in 1776. Then again, he really had no need to read them. The provenance for this copy is that it belonged to his grandson, Sir William Parry. His grandson was one of the great Arctic explorers, coming as close as anyone until many years later to finding the long-sought Northwest Passage, and his attempt to reach the North Pole in 1827, while unsuccessful, was the farthest north ever reached at the time, a record that stood for nearly half a century. £450 (US $735).

This next piece is slightly theological, though more political and practical. This is His Majesties Declaration to All His Loving Subjects. Of the 12 of August, 1642. The problem was that not quite enough of His Majesty's subjects were loving. This was an argument by King Charles I for his right to rule England. It could not stop the brewing civil war, which would continue through most of that decade. In this piece, Charles states the religious argument – the divine right of kings – as well as constitutional and historical reasons why he had the right to rule. It proved to no avail, and eventually Charles was defeated, tried, and beheaded. However, he would make these same arguments as to his right to rule as a last statement shortly before he was executed. Item 19. £250 (US $408).

Item 52 is Substance of the Speech of the Right Honourable Lord Grenville, In the House of Lords, on Monday, June 27, 1814, In Moving for Certain Papers Relative to the Revival of the Slave Trade. William Lord Grenville was serving in the House of Lords at this time, but had previously served many years in Commons, rising to a brief (one-year) term as Prime Minister in 1806-07. He headed a coalition that fell after its inability to get royal approval for Catholic emancipation. However, Grenville's government had one major accomplishment – passing two bills that outlawed the slave trade, first prohibiting the importation of slaves into British colonies by British subjects, and then outlawing the slave trade. Grenville's opposition to the slave trade is reaffirmed in this 1814 speech at a time when he feared it might be reintroduced. £200 (US $326).

While religious tolerance was not always a common trait in old England, one man who was a very strong proponent was William Penn. Of course Penn, as a leader of the Quakers, felt the sting of intolerance repeatedly. Such can be the case when you are part of a small sect of believers. However, Penn's beliefs would be very influential in America where he formed the colony known as Pennsylvania. Item 93 is Penn's The Reasonableness of Toleration and the Unreasonableness of Penal Laws and Tests. Published anonymously in 1687, the views expressed here are consistent with those of Penn, who pushed the Crown to a more tolerant viewpoint. £300 (US $490).

Antiquates Fine and Rare Books may be reached at 07921 151496 or tom@lintern-mole.com. Their website is found at www.antiquates.co.uk.