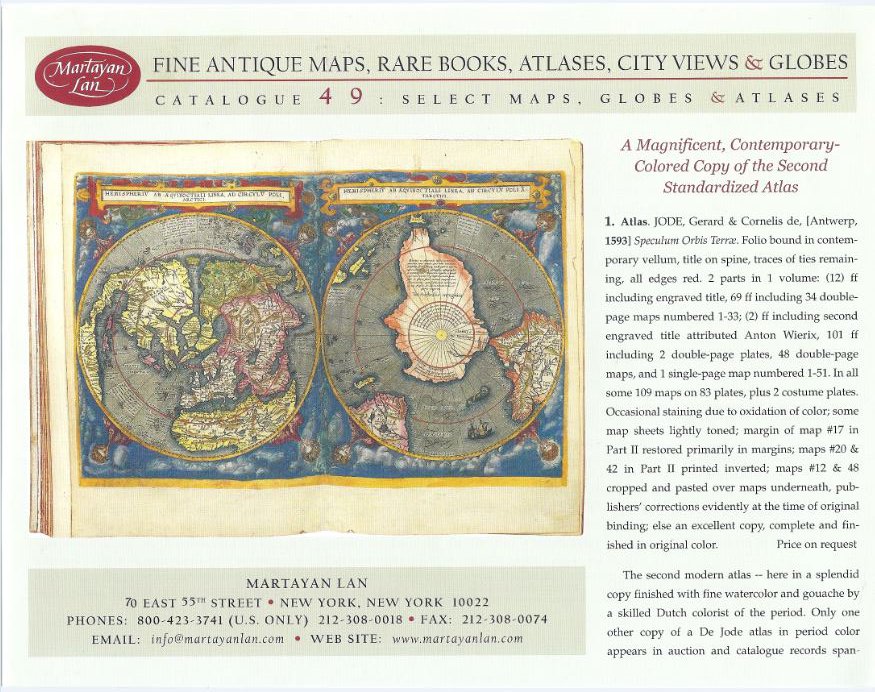 Martayan Lan has released their Catalogue 49: Select Maps, Globes, & Atlases. Their specialty is cartography, and this catalogue also includes some sea charts and city views. Many centuries are covered, with maps as far back as the 15th century, when the world was still essentially seen as it had been by Ptolemy fourteen centuries earlier. Maps adjusted as our understanding of the world evolved. That history can be seen in the maps offered in this latest Martayan Lan catalogue. Here are a few selections.

The last look at Ptolemy's pre-Columbian world can be seen in this 1493 world map from Hartmann Schedel's Nuremberg Chronicle. Schedel had put together an account of world history all the way from Creation to the present time, which was then 1493. That was the year Columbus returned with news of the New World, but Schedel's history was published before this news reached him. Ptolemy's world consisted of Europe, northern Africa, and western Asia. Not only was the New World still unknown, Schedel did not include Bartholomew Dias' discovery of the southern tip of Africa and the fact that the Indian Ocean could be reached that way (it had previously been thought that the Indian Ocean was land locked). Schedel's map was included with the section on Noah, evidently designed to show how his descendants had spread across the world. However, it also contains depictions of various half human creatures supposedly found in far-off places who certainly could not have been descendants of Noah. Item 5. Priced at $27,500.

Item 14 is the only extant map of the Americas associated with the first of the great Dutch mapmakers, Gerard Mercator. It is “associated” since it was actually executed by his grandson, Michael, a year after Gerard died in 1594. The two continents are more rounded, blob-like than the sharp lines known today but there is no difficulty in recognizing their shapes. The poles reflect earlier misconceptions. The Arctic displays two of the four separate islands then believed to exist in the far north, while Antarctica is the massive southern continent long believed to exist until disproven by Cook almost two centuries later. Four corner inserts display details for the Gulf of Mexico, Hispaniola, Cuba, and the maps title – America sive India Nova... $8,500.

Item 17 is a map of the east coast of North America from the Flemish geographer Cornelius Wytfliet circa 1597. It is titled Norumbega Et Virginia, the first map to prominently display the name “Virginia” in the title. Norumbega was a legendary advanced city that proved to be a myth, though Wytfliet appears to use it as a name for everything north of Virginia up through southern New England. The coast line is reasonably accurate for the day though details were not known. Such features as Long Island and Cape Cod are missing. $6,500.

Item 23 is Robert Dudley's Carta particolare della Baia de Messico con la costa. It is the first printed sea chart of the Gulf of Mexico, published in 1648. It ranges from Florida to the Yucatan, including western Cuba. It provides critical information for mariners, such as depths, currents, and hazards. Of notable interest are the numerous place names along the coast, few identifiable today. Some of the rivers in Texas do appear to match up, Dudley's “R. Montanhas” being the Sabine River, “R: d'Ouro” the Trinity River, and “R: Madalena” the Nueces River. “R: Escondido” may be the Rio Grande. Dudley was an unusual figure among early mapmakers. He was the illegitimate son of the Earl of Essex, who made his way to Florence, where this map was published, as the circumstances of his birth prevented him from obtaining a position appropriate for his skills in England. $55,000.