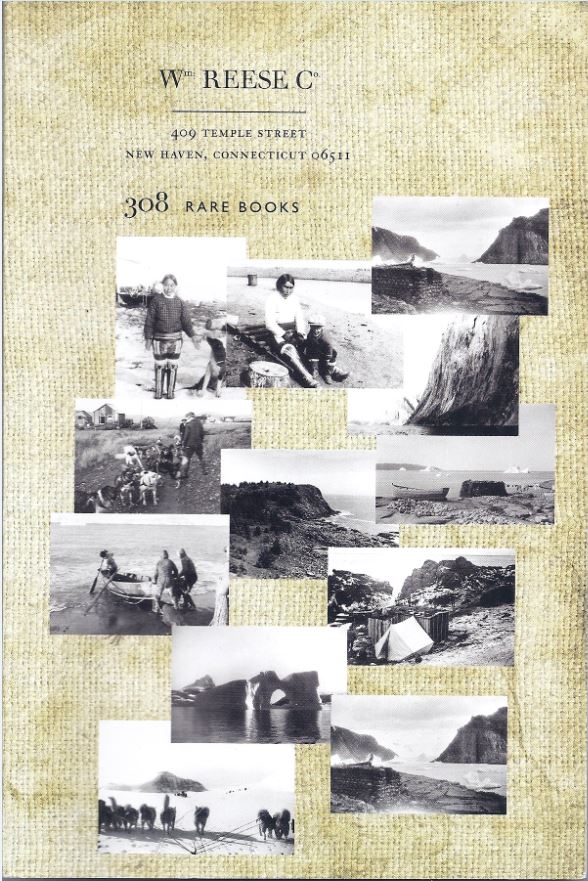 Not the typical Reese selection.

The William Reese Company has published their 308th catalogue: Rare and Fine Books & Manuscripts, Photographs & Other Visual Arts. This is sort of a catalogue of material that doesn't “quite fit” in their usual specialties, notably Americana and literature. As such, we find a lot of European nonfiction, logically enough. Most items are quite old though there is some 20th century material to be found. English is the predominate language, but many works, particularly older ones, can be found in Latin and various continental European languages. Other than that, all we can say is that there is a wide variety of material to be found in this atypical Reese catalogue. Here are a few examples.

What you see on the cover of this catalogue is a collection of personal photographs once owned by the great illustrator, artist, and occasional writer and adventurer, Rockwell Kent. He was also an accomplished photographer, and radical political voice, but out of all of these things, it was his role as illustrator for which he is most remembered. Shown on the cover is just a tiny fraction of this archive. It consists of 31 photo albums containing 1,125 photographs ranging from around 1929 through the 1960's (he died in 1971). The albums cover various locations, including his homes at Asgaard (New York) and Monhegan Island (Maine), as well as trips to Greenland, Alaska, Puerto Rico, Denmark, Richmond, and the American Southwest. Sixteen of the albums and half of the photographs cover his three trips to Greenland. He spent long periods of time living in the isolation of Greenland, with only a few native neighbors having not a lot in common with him for company. He liked isolation. Item 167. Priced at $195,000.

Has it really been 30 years since these two gentlemen graced the pages of our newspapers? Item 66 is books 1-3 of The Mutt and Jeff Cartoons, published from 1910-1912. These are the work of Mutt and Jeff's creator Bud Fisher. The tall and short gentlemen outlived their creator by almost three decades, but Reese informs us that even they passed on to cartoon heaven in 1982. Mutt was the tall one, Jeff short, and neither was terribly bright, though Mutt was always coming up with some scheme or other. The Mutt and Jeff comic strip first appeared in 1907, and it quickly became the first successful daily comic strip in America. There is something odd in that this progenitor, a once beloved part of America's daily life, is available for such a small price compared to the millions of dollars a first edition of Superman or Batman comics now bring. Then again, Mutt's schemes never did make him much money. $1,000.

Perhaps this diminutive little lady would have made a good mate for Jeff. Martha Ann Honeywell was only three feet tall. That wasn't what was most remarkable about Ms. Honeywell. She was born without arms and yet she was amazingly talented at needlework, cutting, and embroidery. I don't know how she did it, but for 25 cents you could have found out, had you been around in 1846. Item 147 is a broadside headed Gallery of Cuttings and Needle-Work, Executed without Hands, for One Week Only... It informs us, “This interesting and talented Lady, born without arms, has acquired such extraordinary skill in the use of a common pair of Scissors, that by holding them in her mouth she is enabled to cut out of Paper the most curious and difficult designs ever attempted, or perhaps executed in the known world, such as Scripture Pieces, Likenesses of Distinguished Americans... She also writes the Lord's Prayer in a space that can be covered with a Five cent piece.” If you look around the internet, you can find some of her work still offered today. $1,500.

Item 110 is a biography of a man better known as “Fighting Fitzgerald”: The Life of George Robert Fitzgerald, Esq. Containing Every Interesting Circumstance Which Happened to that Unfortunate Man, from His Quitting School to His Melancholy Exit... Fitzgerald's “melancholy exit” came at the end of a rope after he was convicted of participating in a killing. Fighting Fitzgerald was no ruffian but a well-bred, educated, apparently courtly man who could lose it all at times. It was said that a blow to the head at the age of 20 led him to turn mad. Fitzgerald was noted for getting into duels, as many as 12 along the way. However, it was other intrigues that eventually led to his demise. This book was published in 1786, the same year Fitzgerald made his exit. $900.