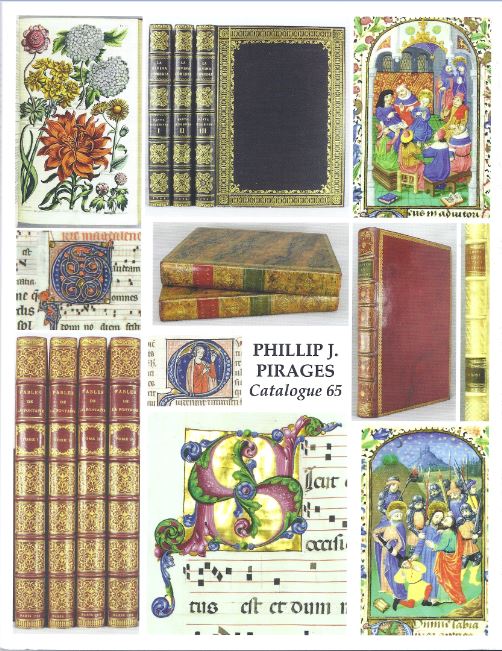 Phillip J. Pirages Fine Books and Manuscripts has issued Catalogue 65: Vellum Illuminated Manuscript Material, Printed Books from 1505-1799 (and Fine Modern Facsimiles, Early Documents, and Single Printed Leaves). Offered is very early material, printed items ranging mostly from the dawn of printing through the 18th century, and manuscript items sometimes preceding the invention of printing by several centuries. “Antiquarian” is the watchword here. The other common thread is that these items overwhelmingly come from England and continental Europe, as one might expect of early works. That may be a bit surprising for a bookseller located in McMinnville, Oregon, but at some time or other this material made the long journey to the New World.

Pirages' catalogues are among the best in the business. The descriptions are thorough and illustrated. There are 571 items, but Pirages has supplied 400 pages to describe them all. Leaving things to your imagination has its place, but not when you are making a purchase. “Clarity” is another watchword for Pirages' catalogues. Here are a few sample items from this latest collection.

We will start with one of the earliest pieces, an illuminated manuscript leaf almost a millennium old. This comes from the text in Latin for a Good Friday mass, created in Germany during the late 11th century. It survived by having been used in the binding of a later book. The narrative taken from Matthew has been marked with four letters for different parts, indicating it was recited by four different speakers. Pirages notes this is some of the oldest evidence of liturgical drama. It displays the handwork of a very skilled scribe, though Pirages notes that a few faded lines on the recto were later strengthened by the writing of a less skillful hand. Item 2. Priced at $4,500.

Item 199 is a complete vellum manuscript created right around the time Gutenberg was inventing his press - circa 1450. It contains three works written by St. Jerome during the fourth century. Jerome was a fairly orthodox believer who didn't mince words in defending his beliefs. The first work in this trilogy is the Life of Paul the Hermit (Paul of Thebes) who led an ascetic existence in the desert, spending almost a century in a far off cave alone. Jerome approved of this lifestyle. The second is Dialogues Against Pelagius, who denied the concept of original sin. This did not meet with Jerome's views. Pirages notes that Jerome was not entirely logical in his arguments, alluding to Pelagius' corpulence and success with women. The third piece is another condemnation of an opponent who opposed reconciliation with those who had formerly defined the Son as separate from the Father (but had renounced those beliefs). Pirages notes the skilled, concise writing and striking initials in this manuscript. $30,000.

Inoculation was a controversial subject in the 18th century. Aside from the fact that injecting people with a disease does not, on its face, sound like a great idea, the outcome was not always the best. Item 341 is An Inquiry into the Merits of a Method of Inoculating the Small-Pox, which is Now Practiced in Several Counties of England, published in 1766. The author was Sir George Baker, who supported the practice. His support was significant as he carried the prestige of being a physician to the royal family. However, at the time, the inoculation used a small amount of material from the diseased patient. The hope was it would only cause a mild case of the disease while building up the recipient's immunity. Unfortunately, sometimes the case was not so mild and the patient died from the “cure.” Still, it improved their odds. It would not be until the later days of the century that the use of harmless cowpox in the injection would provide a safe means of inoculation against smallpox. $950.

Item 533 is a rare surviving copy of an early attack on the witch-hunting frenzy of the 16th and 17th centuries: The Discoverie of Witchcraft, wherein the Lewde Dealing of Witches and Witchmongers is Notablie Detected... by Reginald Scot. Published in 1584, people in Salem, Massachusetts, still managed to ignore the message over a century later. Scot divided those accused of witchcraft into four categories, for which he had explanations as to why the accusations were false. There were poor women generally despised by their neighbors, those who were mentally disturbed and may have even believed they possessed supernatural powers, those who used tricks to fool people, and genuinely bad people who sought to harm others, but that did not make them witches. Claiming witchcraft was false was actually heresy in its day, and King James later ordered Scot's book burned, explaining its rarity. The King had written about demonology himself. $80,000.