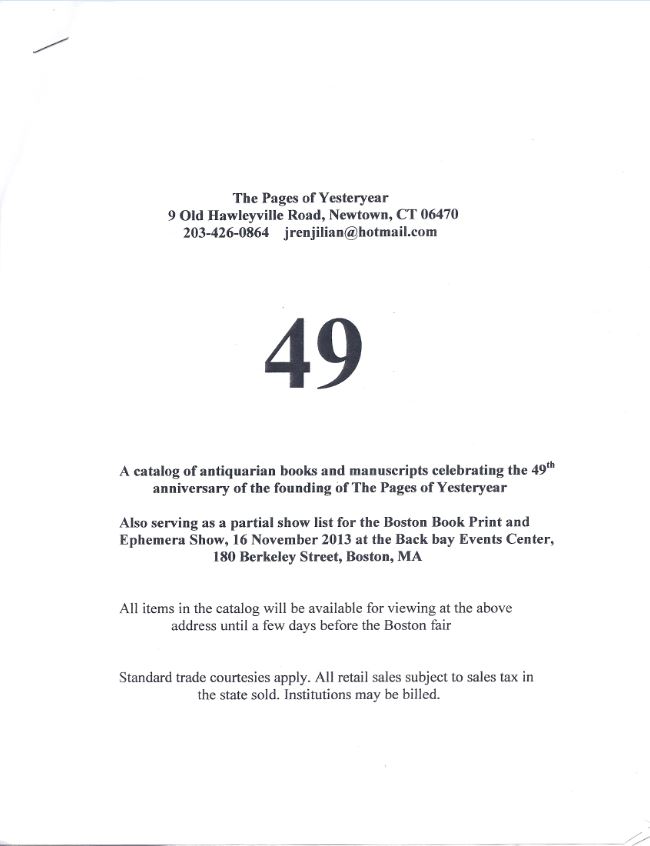 The Pages of Yesteryear has issued their annual date-numbered catalogue. This one is number 49. It celebrates 49 years in the book business. This catalogue offers an eclectic mix of mainly shorter length material, much of it written by hand. There are diaries and such, one of a kind items primarily from the 19th century. They quickly display how much times have changed. The material here is rare if not unique, and generally quite fascinating. Here are some samples of what you will find.

Item 4 is an eight-panel promotional piece for Charles J. Strobel's lighter than air Strobel Airships, from 1908. That timing may make Strobel sound like something of an aviation pioneer, and to some extent he was, but he didn't fly his airships or airplanes. Strobel was a businessman, and evidently one of the best in Toledo at the time. Strobel had previously owned Toledo's professional baseball team, the legendary Toledo Mud Hens, still in business today with their quirky name (it was named for the mud hens that lived near the team's original ballpark). By 1904, Strobel was in the aviation business, but as a showman, not someone looking to advance transportation. In 1908, he was promoting shows featuring his dirigibles. Strobel's airships featured a large, balloon-like gas bag filled with hydrogen (like the Hindenburg) with a thin metal frame below, holding a propeller, engine to run it, a rudder, and a pilot. Sometimes it all worked well and other times it nipped buildings on the ground. This accordion-style fold-out announces “winning international contests at St. Louis, Mo. October 23, 1907.” This is true. Some 100,000 people reportedly attended the St. Louis show the previous year to watch competitions in heavier than air (airplanes) and lighter than air vehicles. The top two finishers in the lighter than air category both operated Strobel airships (only 3 of 8 contestants finished). Strobel would turn to airplanes a bit later with his Strobel International Aviation Company performing at shows in 1911. I have not been able to trace what happened to this business after 1911, but Strobel himself died in 1915. Priced at $350.

Most nations don't have a problem dealing with their flag, even if boundaries change, but the symbolism of the American flag led to a serious problem. It began with 13 stars and 13 stripes representing the 13 states. When Vermont and Kentucky were added in 1794, that was increased to 15 stars and 15 stripes. However, as the numbers continued to grow, a serious problem arose. The result was that Congress was forced to appoint a committee to come up with an answer to the issue, and on January 2, 1817, they came back with this: Report of the Select Committee appointed...to inquire into the expediency of altering the Flag of the United States. They determined that it would be inexpedient to increase the number of stripes because flags generally come in a fixed size, and adding more stripes “would necessarily decrease their magnitude, and render them proportionately less distinct to distant observation.” Therefore, they recommended returning the stripes to the original 13 but adding another star for each new state. Sounds like a good plan! It was adopted and we haven't looked back since. Item 18. $250.

Item 5 is a manuscript of ten pages in a composition book by schoolgirl Beatrice Bernardino from 1911. In it, she writes a brief history of the old Winthrop school, which closed that year. It had once been a girls school, but many years earlier merged with an associated boys school, and was now about to be subsumed into the new Abraham Lincoln School. Miss Bernardino discusses some of the famous graduates such as the children of William Lloyd Garrison. There are also separate essays including “A Vacation in Weston,” “Thanksgiving at Grandma's,” and “Christmas Shopping.” $75.

Here is a letter from another young lady, apparently in boarding school, to Mom, from January 28, 1824. Miss B.P. Howell writes from Philadelphia to her mother, Anna, at “Fancy Hill.” Fancy Hill was a magnificent estate across the Delaware River from Philadelphia in New Jersey belonging to the Howell family at the time, so this letter fits with the known history. The young lady was likely the daughter of Col. Joshua Howell and his wife Anna Blackwood Howell. She pleads for permission to take dancing lessons. She explains,”...for it is very unpleasant to see people all knowing how to dance.” She points out that a cousin is taking lessons. “If I begin the first of February I shall have a quarter but if you thing [sic] a quarter will cost to much permit me to go half a quarter.” We do not know whether Mama agreed to her request, but we can be confident that the cost was not too much for this family to bear. Item 14. $100.

Next is an item for those who enjoy Presbyterian cooking. Presbyterian cooking? Most Presbyterians probably don't even know what this is. Well, here it is: The Secrets of Mother's Pantry. Practical Receipts from the Tables of the Presbyterian Ladies. It was probably good hearty farm cooking since this booklet was prepared by the Ladies of the Presbyterian Church of St. Paul, Nebraska, in 1905. A terrible fire had destroyed their church in February and this was part of the effort to raise funds to replace it. Along with the recipes and local advertising are pictures of the church on fire and of the ruins that were left. Item 12. $95.

You probably think that being a litigious society is new, that something like suing your town because some boards on the street damaged your car is not something earlier generations would have done. Think again. Here is an example, although there were no automobiles in 1860. John H. White writes to the Selectmen of Strafford, New Hampshire, representing Joseph Drew. White claims, “his sleigh came in contact with two boards negligently left across the travelled part of the road,- that his horse was injured thereby and became unmanageable, injured Mr D & damaged the sleigh to the Amt of $10... Mr D wishes me to say to you that he shall look to the town of Strafford for compensation.” Item 28. $50.