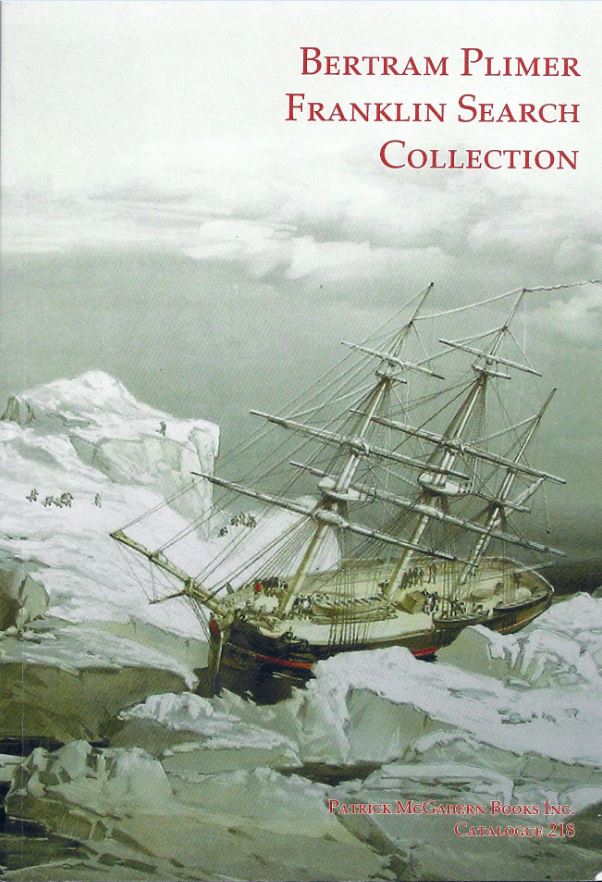 Patrick McGahern Books of Ottawa has released a catalogue dedicated to a spectacular collection of a specific subject: The Bertram Plimer Franklin & North West Passage Rare Book Collection. Mr. McGahern describes it this way: “While these kinds of claims are nearly always too grand or wrong or even silly, still it has to be said that this, to date, is the greatest collection of rare books on Franklin search and the North West Passage.” It includes books McGahern describes as once in a lifetime, and some so rare most do not know they exist. Some do not even show up in standard bibliographies, making this more than just a catalogue but a bibliography of sorts. It contains 462 items, all related to Franklin, the North West Passage, or an occasional one with other Arctic connections.

Bertram Plimer was a freelance cameraman and film maker operating his own production company. He traveled with several Canadian prime ministers and met numerous world leaders through the course of his career. Mr. Plimer died in 2009 at the age of 81. Patrick McGahern noted that Mr. Plimer began frequenting his store in 1973. They became good friends and McGahern helped him find many of the books, but still was amazed when he discovered just how extensive the collection was. The result is a catalogue he describes as “beyond rare.”

The North West Passage, one of the subjects of this collection, is the elusive sea route from Europe to Asia north of Canada, through the Arctic Ocean. In the days before the Panama Canal, the shortest route from England to East Asia meant circling all the way south of South America, through the treacherous Strait of Magellan. The distance could be reduced enormously if one could sail almost due west through the Arctic Ocean. However, various islands and, naturally enough, ice made finding such a route an immense challenge. That did not stop explorers from taking up the challenge, nor England from offering for centuries great rewards to whomever found it. It would not be until the opening of the Panama Canal early in the 20th century that the need for such a route would diminish. Today, exploration of the area is readily accomplished and while such a route was eventually found, there is no route that is practical for a significant amount of commercial shipping. The season, if there is one, is too short to be of much use, though melting of Arctic ice may make it somewhat more practical in the future.

One of those who attempted to find such a route was Rear-Admiral Sir John Franklin. Franklin led several Arctic expeditions, the last an 1845 search for a North West Passage from which he never returned. His disappearance was a mystery. It resulted in one of the largest manhunts in British naval history. After the British began to lose hope, Franklin's widow commissioned several expeditions on her own to find her missing husband. It would not be until over a decade later that artifacts from the Franklin expedition would be found. They revealed that he had become trapped in ice, and with limited supplies, the men attempted to escape over ice and land. Unfortunately, they all succumbed to the elements and starvation before finding civilization.

Now, we will take a look at just a few of the many items to be found in this catalogue/bibliography.

One of those who came closest to finding a North West Passage over the years was William Parry. He led an expedition in 1819 that continued where Ross had turned back and made it farther west than any before. They were aided by it being an unusually mild year. Still, the ice came, and they were forced to winter over. Parry showed that it was possible to survive winter in the far north, so as to be prepared to continue when the next summer finally melted some of the ice again. However, they were not freed from the winter ice until the following August, and after proceeding a bit father west, they realized they needed to turn around and head home before it was too late. Parry would make two more attempts to find a passage, with less success, but he also made an assault on the North Pole which, while also not successful, did take him farther north than anyone had traveled before. Item 323 is Parry's account of his first voyage, Journal of a Voyage of Discovery of a North-West Passage from the Atlantic to the Pacific: performed in the years 1819-20...under the orders of William Edward Parry... published in 1821. Priced at $1,500.

For all of the unsuccessful attempts to find a North West Passage, to this day no commercially viable route to be found, it is surprising that more people did not reach the logical conclusion expressed by the anonymous writer “Scrutator” in 1824. His reasonably titled book is The Impracticability of a North-West Passage for Ships, Impartially Considered. He reached the obvious conclusion that there was simply too much ice in the Arctic Ocean for there to be a practical route to the east that far north. Item 419. $5,000.