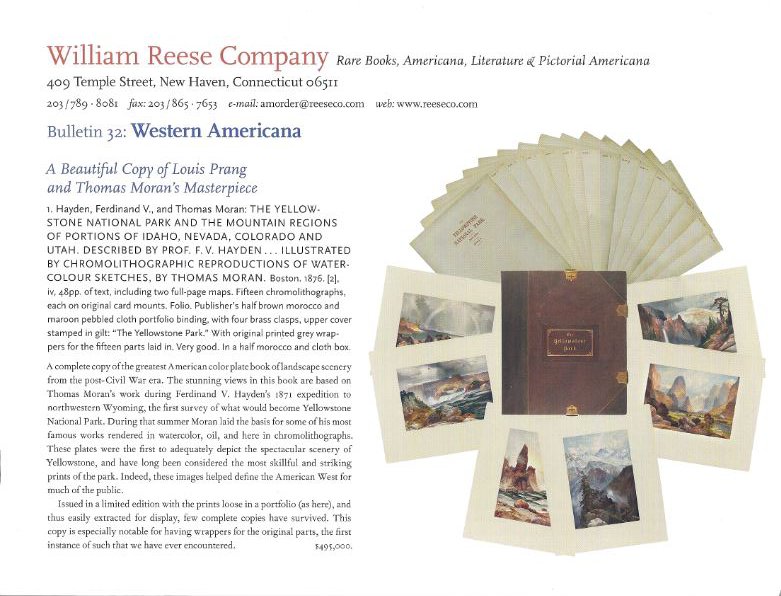 The William Reese Company has issued their Bulletin 32: Western Americana. What could be more fascinating than the American West? Nothing, of course, if you are a collector of the West. Others need not apply. This bulletin contains 32 items, and they are important pieces to the highest level collections of Western Americana. There isn't much in the way of lawmen and outlaws, or cowboys and Indians (though lots about Indians before there were cowboys).There is much about early exploration and settlement of the West, the land more as it was than as it was later fictionalized. Here are a few sample items.

The most notable early visitor to America's heartland was the French explorer La Salle. He visited the Great Lakes, traveled the Ohio River, and eventually canoed all the way down the Mississippi to the Gulf of Mexico. It was a notable achievement. Unfortunately, his final journey to America did not turn out so well. He was sent directly from France to set up camp near the mouth of the Mississippi River, but overshot his mark, perhaps not entirely by mistake. While La Salle had claimed and named what became the Louisiana Territory on behalf of France, this time his nation wanted to expand a bit to the west, grab a little of the territory that Spain thought was theirs. It didn't turn out well. La Salle and his men landed in Texas, and after attempting to settle, the men became tired of the place. La Salle determined they should return by way of Canada, up the Mississippi as he had before, but he never got the chance. One of his men killed him. His second in command, Henri Joutel, feared the same fate, but was not killed and instead led some of the men on their return up the Mississippi. Item 15 is Joutel's account of their unpleasant adventures in Texas and beyond, Journal Historique de Dernier Voyage que feu M. de La Sale Fit dans le Golfe de Mexique... published in 1713. Priced at $22,500.

Item 10 is a letter from Sam Houston, dated November 1, 1836, just ten days after he assumed the position of the first elected President of the Republic of Texas. Houston exclaims that “the eyes of the world are upon us,” and they faced “difficulties and dangers on every side.” However, he then proclaims “these dangers and difficulties have been gloriously surmounted.” Houston refers to the Texian victory at San Jacinto that won them their independence, and expresses his thanks to the voters for selecting him. He then makes a very early reference to what would become the dream of so many Texans, stating that “the people of Texas have shown through the ballot box at the late election that they are decidedly in favor of annexation to the United States.” $95,000.

Item 28 includes six letters from California settler Johann Augustus Sutter to fellow pioneer Jean Jacques Vioget. They range from February 1842 to June 1843. In them, Sutter discusses his early career in the Sacramento area, including his business ventures and financial hardships, along with interactions with emigrants, trappers and Indians. Sutter speaks of defending his large land claims from former associates who tried to grab part of his land. Sutter would always be plagued by those seeking to steal his land, especially a few years later. It was at Sutter's Mill in January 1848 that gold was discovered, setting off the California Gold Rush and the greatest westward migration in American history. Along with Sutter's letters, this collection includes 22 manuscripts and printed forms relating to Vioget's career. $142,500.

A couple of major attempts were made to preserve images of America's natives before they were irretrievably altered by American culture during the 1830s and 1840s. The best known are those of McKenney and Hall (and illustrator Charles Bird King) and George Catlin. However, before either of them published their illustrations, James Otto Lewis published his rare The Aboriginal Port Folio, or a Collection of Portraits of the most celebrated Chiefs of North American Indians. This was issued in ten parts from 1835-1836, eight plates in each. However, very few of the tenth part were completed, so almost all have 72 plates (as does this copy). The eleventh planned volume, one of text, was never published. This portfolio is the first major American color plate book on its natives. Lewis had accompanied Michigan Territorial Governor Lewis Cass on four treaty expeditions around the Great Lakes region during the 1820s. He used the opportunity to paint portraits of numerous chiefs he encountered. Lewis' quick completion of the portfolio may be attributable to the then coming release of McKenney and Hall's collection. Item 19. $100,000.