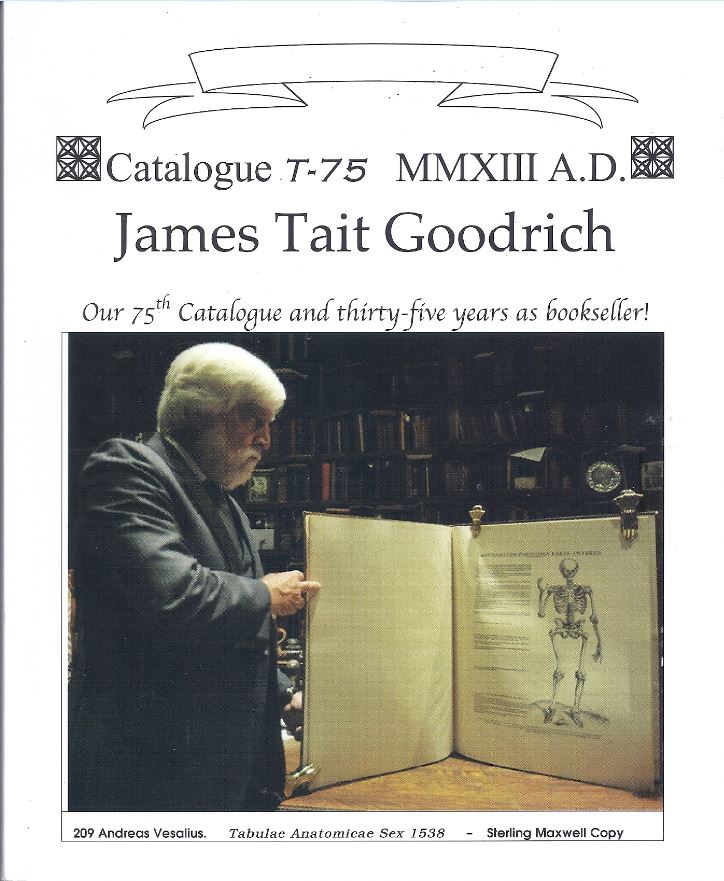 James Tait Goodrich Antique Books and Manuscripts has released their Winter 2013 Catalogue T-75. This is their 75th catalogue and represents 35 years selling books. If you are wondering how far back that goes, think disco. This catalogue is subheaded History of Medicine and Science, Pre-Columbian Artifacts, Medical Instruments and Antiques. Still, most of what we have in here is books and pamphlets pertaining to medicine. The vast majority date from the 19th century and earlier, all the way back to the 15th. There is an occasional non-textual item. There is a Vaginal Ladies Feminine Irrigation syringe which looks like it still works. I am not sure why they had to add the word “ladies” after “vaginal.” Isn't that redundant? Or you can buy a real shrunken head, only about five inches in diameter. These were once worn around the successful warrior's neck, like a necklace, but this one comes with a stand in case wearing it creeps you out too much. Still, most items are printed works, and these are serious medical tracts, even if primitive by today's standards, not quackery. We will now take a look at a few of them.

Probably the most important development in surgery, at least from my point of view, was the discovery of anesthesia. Surgery without anesthesia is not a happy thought. John C. Warren of Massachusetts was a pioneer in the field. Warren performed the first anesthetized surgical procedure in 1846, a public demonstration of a removal of a tumor from the jaw of an unconscious patient. He used an unknown substance provided to him by dentist W. T. G. Morton, evidently some form of ether. The patient awoke with minimal pain. Warren wrote about the subject in 1848 in his book Etherization: with surgical remarks. Item 7. Priced at $1,295.

One of the unfortunate sources of medical advances is war. Far too many patients are created. Item 47 is The Medical and Surgical History of the War of Rebellion. 1861-1865, six volumes (this is a mixed set) by J. J. Woodward and others, published 1870-1888. It has been described as “One of the most splendid collections of case histories and pathological reports dealing with war medicine ever, and beautifully illustrated with fine plates.” Beauty is in the eye of the beholder, as while the quality of the illustrations is exceptional, the subjects are not what we normally think of as “beautiful.” Additionally, there are many photographs along with 6,000 pages of text. Much of the work focuses on disease, which was a greater problem than war wounds, and injuries to the extremities, resulting in many amputations. $1,500.

Item 45 is an early (1724) guide to healthy living: An Essay on Health and Long Life. The author of this popular guide was George Cheyne. He was a candidate for the motto “physician, heal thyself.” Actually, that is precisely what he attempted to do. Cheyne was a physician who habited the local taverns, ostensibly to keep in touch with his patients where they were to be found. He ate well, far too well, once reaching a weight of 440 lbs. So, Cheyne understood the need for regulating diet. He became a vegetarian, drifted back (as did his weight), and then regained his fortitude. $595.