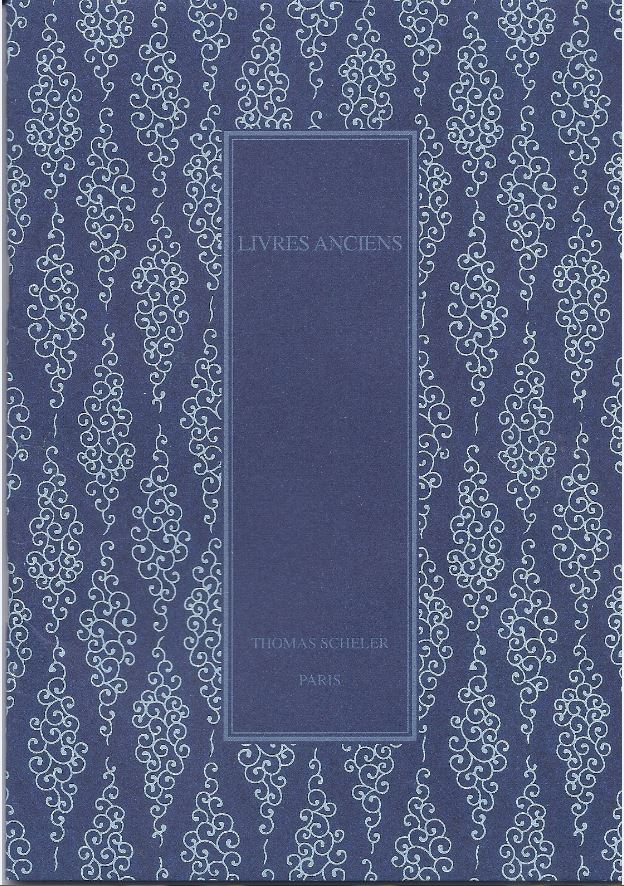 We have received catalogue number 43 in the series of Livres Ancien (antiquarian books) from Parisian bookseller Librairie Thomas-Scheler. As a caution to English speakers, this catalogue is entirely in French. You will need some familiarity with the language to appreciate it. For this writer, with only French learned in high school many, many years ago, it is a struggle, so if descriptions of items are concise and not terribly informative, it is my fault, not the cataloguer's. Pardon my French (or lack thereof). I was a miserable student, even when my education was still fresh.

There is a variety of material to be found in this selection. There are many medical and scientific texts from long ago, but there are also travels, literature, social issues and more. I think we can call it a miscellany, but skewed toward scientific types of writing. Here are a few items being offered.

Item 19 is Nuove Sperienze Electriche... (new electrical experiments) by the 18th century Italian physicist Carlo Barletti. Barletti has been overshadowed by his contemporary Italian experimenter in electricity, Alessandro Volta, but he was an important physicist at the time this book was published, 1771. A few years later, Barletti would become chair of the experimental physics department at the University of Pavia. He was a proponent of Benjamin Franklin's fluid theory of electricity. Priced at €450 (euros, or around $606 in U.S. currency).

Here is a book about a terrible disease and an even worse “cure”: Lettera sopra l'uso medico interno del mercurio sublimato corrosivo, e sopra il morbo venereo. This is Giovanni Calvi's look at the use of mercury in combating the effects of venereal disease, published in 1762. Mercury was the only treatment available at the time, but the large doses of this highly toxic metal were likely more poisonous than the disease itself. Still, it wouldn't be until the 20th century that useful treatments for Columbus' gift to the Old World would begin to be developed. Item 45. €250 (US $336).

Staying on the topic, item 8 is De morbis venereis libri sex, by Jean Astruc, published in 1736. The book is a critical bibliography of literature pertaining to syphilis, from its introduction to Europe in 1493 by Columbus' returning sailors, through 1735. Item 8. €250 (US $336).

So where might be a good place to contact venereal disease, if for some unfathomable reason one wanted to? Perhaps this book has the answer: Memoire sur la prostitution publique et parallele complet de la Prostitution romaine et de la Prostitution contemporaine. One does not have to be able to read French to guess what a book that has the word “prostitution” in its title three times is about. This is a memoir about prostitution, including prostitution in Roman times, and prostitution in the contemporary world. That's why the word makes three appearances in the title. The report tells you all you need to know, maybe more, about prostitution in France during the second empire, particularly around Bordeaux. How author J. Jeannel knew so much about the subject is not clear to us. Published in 1862. Item 118. €460 (US $606).

Here we have a series of publications in English, published from 1886-1890, The Willits Journal. Charles S. Willits was a Philadelphia Quaker who left a then princely sum of $10,000 when he died in 1883 to be used to distribute religious tracts. He specified that one-half of them should go to “the colored people of the southern states,” and the other half to “the colony of Liberia.” The journal would later be known as The African's Friend. We have been able to determine that it continued to be published, though not always on such a regular basis, into the Nineteen Teens. We find no trace later and presume it was discontinued. A trust fund of $10,000 today would not go very far. Item 213. €250 (US $336).