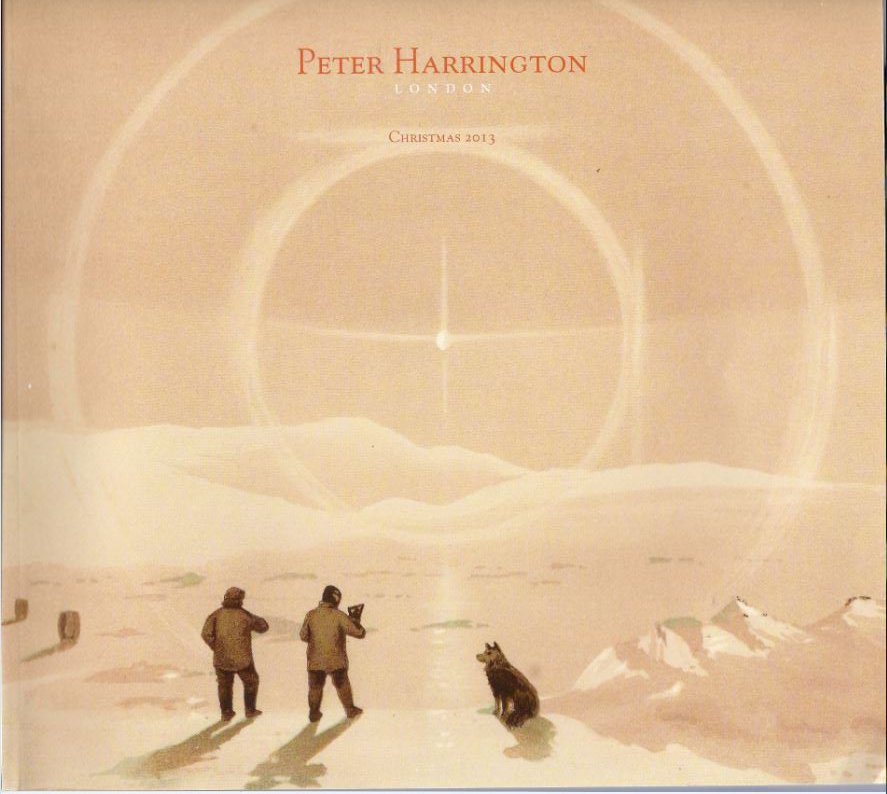 Peter Harrington has issued Catalogue 94 Christmas 2013. Last month we received a Harrington Christmas catalogue devoted to artistic works. This one returns us primarily to books, though there is an occasional ephemeral item (such as a John Tenniel Alice Through the Looking Glass chess set). There are books to which you might like to treat yourself (a bit more expensive) and some designed to be gifts (a few hundred pounds). Of course, you are free to be selfless and reverse the role of recipient of the most expensive items. Let's take a look at a few of the gifts awaiting wrapping.

Speaking of Alice, here is a book that has been signed by her. You might object that Alice was a fictional person, but mathematician Charles Lutwidge Dodgson (pen name Lewis Carroll) patterned her after a real child, Alice Liddell (later Hargreaves). Dodgson/Carroll died in 1898, but the young girl who served as a model for Alice was still living in 1932 when the Limited Editions Club published its edition of Alice's Adventures in Wonderland. It was issued in 1,500 copies, and the Limited Editions Club persuaded Mrs. Hargreaves to sign their edition. It comes with a letter to the club's members detailing their negotiations to get the 80-year-old Alice to sign. It also comes with Carroll's follow-up, Through the Looking Glass, published in 1935, but this one lacks Alice's signature. She died in 1934. Item 36. Priced at £3,500 (British pounds, or roughly $5,613 U.S. dollars).

Pollsters today seem to know better what we think than we do ourselves. They can predict elections with uncanny accuracy, to the point we wonder why we even need to have the elections. It was not always thus. George Gallup was the pioneer and he revealed the nature of polling in his first book, A Guide to Public Opinion Polls, published in 1944. Gallup made his name during the 1936 election when he predicted Franklin Roosevelt's victory over Alf Landon. The election was a laugher – Roosevelt carrying all but two of the then 48 states, but at the time, many believed Landon would win. Such was the absence of knowledge before polling. Item 240. £350 (US $561).

Since this is a Christmas catalogue, we would be remiss in not mentioning one of the most popular of all Christmas books – A Christmas Carol, by Charles Dickens. Offered is a first edition, first issue, published in 1843. Few people are unfamiliar with this tale of greed and redemption, a story performed in plays all over the western world every year at this time. It always ends well. Item 33. £5,000 (US $7,968).

Next we turn to the spoken, rather than written word. It comes from Winston Churchill, but it was not about rallying Britain in its “darkest hour.” It was much earlier. Item 20 is a 78 rpm record of Churchill speaking in November 1918, following the First World War. He spoke about the need for rebuilding Britain and having an election. Churchill had served the government during the war, but his influence was hardly what it would be two decades later at this point in his career. The flip side of the record contains a speech by John Robert Clynes, a Labour Party leader, who has signed his side of the disk. The record was produced by His Master's Voice, a British company that had the rights to and used the famous illustration of a dog listening to a recording through a megaphone, an illustration whose American rights were held by the Victor Talking Machine Company, later RCA Victor. The sleeve is that of Hime & Addison, a Manchester music shop that served as agents for His Master's Voice. £850 (US $1,353).