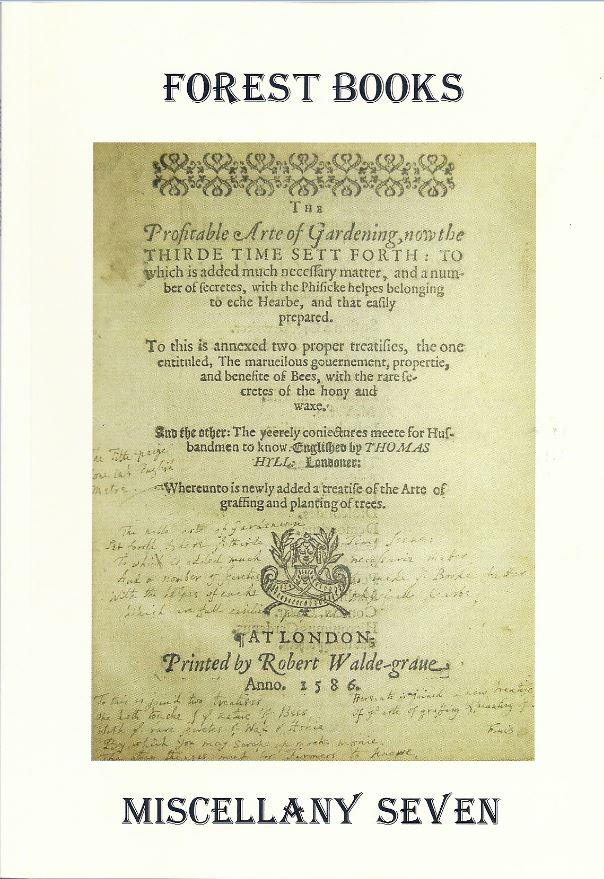 Forest Books has released a catalogue titled Miscellany Seven. That's the short, cover title. The long title, which will save us from trying to describe what can be found within, is A Catalogue of Rare and Curious Books, Pamphlets & Printed Ephemera On a variety of subjects. Including: Agriculture, Architecture, Botany, Children's Books, Crime & Law, Cookery, Economics, Education, English Literature, Farriery & Equestrian, The Fine Arts, Genealogy, Geology, Horticulture, Ireland, Military & Naval, Natural History, Photography, Private Printing, Social Studies, Science & Medicine, Sporting Books, Technology, Trade Catalogues, Travel & Topography, etc. That is about as thorough a description as we could devise, especially with the “etc.” to cover anything missed, so we will move on to describe a few specific items.

Here is a book that combines railroads, steamboats, and medicine, an unusual combination until you read the title: A Code of Instructions for the Treatment of Sufferers from Railroad and Steam-boat Accidents, sudden attacks of illness, and suspended animation from various causes, until medical aid can be procured. This is a first aid manual for what to do when someone becomes ill or injured while traveling, written by Sir Arthur Clarke using the latest medical advances as of 1849. The second part of this work provides advice on cures of disease through healthy waters, exercise, and diet. Item 29. Priced at £375 (British pounds, or $601 in U.S. dollars).

Speaking of medicine, item 156 is William Prout's 1821 classic An Inquiry into the Nature of Treatment of Gravel, Calculus, and Other Diseases Connected with a Deranged Operation of the Urinary Organs. I am not sure what small stones and mathematics have to do with urinary diseases... Perhaps they had a different meaning then. As for a “deranged” operation of the urinary organs, that sounds most unpleasant. Stay away from deranged physicians! £295 (US $473).

Next we have a work by Charles Darwin you may have missed: Experiments Establishing a Criterion between Mucaginous and Purulent Matter. And an Account of the Retrograde Motion from the Absorbent Vessels of Animal Bodies in some Diseases. You are doing well if you even understand what this title means (it evidently describes the distinction between mucus and pus, a fascinating subject). Darwin wrote this as a university student, at the mere age of 19. Evidently, he was quite smart. Oh, you may have been thinking of the other Charles Darwin, the evolutionist. This is not he. This Charles was the eldest son of Erasmus Darwin, the other Charles' grandfather, making him the uncle of the more famous Charles Darwin. Sadly, they never met. The uncle died at the age of 19, apparently the result of disease after cutting himself performing an autopsy, 30 years before his nephew was born. However, it was after this Charles that the more famous Charles Darwin was named. Erasmus published his son's dissertation, this work, after his death. Who knows what this obviously brilliant earlier Charles Darwin might have accomplished had he lived to be an adult? Item 42. £295 (US $473).

Here is a most unusual item – a locket, less than one inch in size, containing a dozen early photographs (1863). When the locket is opened, six hinged metal frames (doubled-sided) containing the pictures open accordion style. The subject of this tiny piece was the wedding of some tiny people - “General” Tom Thumb and his bride, Lavinia Warren. Thumb (real name Charles S. Stratton) was 3 feet 4 inches in height. Lavinia was not so tall. The “General” was discovered, of course, by P. T. Barnum, who put him on display in his shows. It was Barnum who engineered the marriage, creating an immense amount of publicity for his shows as a result. This locket was one of several souvenirs Barnum created and sold in conjunction with the wedding. Despite the publicity intent, the marriage worked out well, lasting until Tom Thumb died in 1883. Item 184. £695 (US $1,115).