Marc Selvaggio is In Search of Ephemera 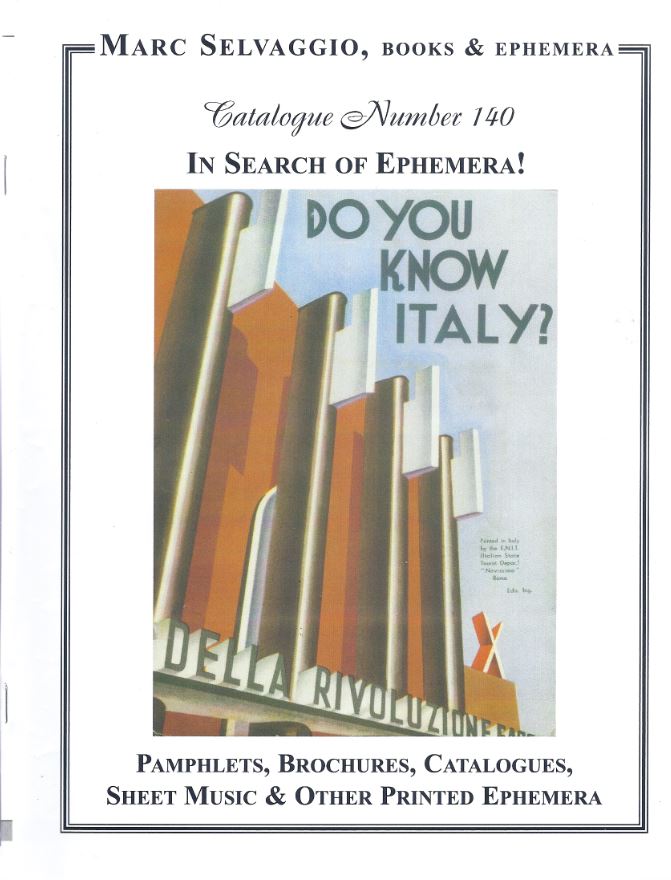 In Search of Ephemera!

Marc Selvaggio, Books & Ephemera has issued their Catalogue 140. In Search of Ephemera! They have found it - over 400 items. These may not be memorable literary works. Great writers and illustrators are absent. The inexpensive prices reflect this reality. Most is advertising and promotional material. What this catalogue provides is a whole lot of fun, and many items you can't help but want to have. Advertisers have been trying to sell their wares from the time wares were invented. Some in this catalogue are useful, others pure quackery. Surely there was a sucker born every minute back in the days these were produced, just as there is today. It's fun to look at yesterday's fools, ignoring that we are today's edition. Here are a few samples.

We begin with an amazing advance in aircraft technology from 1929: The Flyworm Aircraft. The First Truly New Principle in Aviation Since Wright Bros. Indeed it probably was, so long as one recognizes that a truly new principle does not mean it is a good one. The Wright Bros. first flight of 120 feet was a good 120 feet farther than the Flyworm ever flew. The precise principles behind this very strange looking aircraft have been lost to history, although its designer, Paul Maiwurm, was evidently an inventive man, but was not prepared for the numerous defects in this invention. The Flyworm featured a large barrel-shaped cylinder, roughly 4 feet in diameter, 6 feet long. It was spun by a motor below, with various forces supposed to achieve lift-off, but apparently achieved violent shaking as well. Part of the contraption broke in his first demonstration, and there is no record of any further ones though Maiwurm continued to try for at least a while. Perhaps it was some sort of early jet technology Maiwurm was employing. Item 46 is a four-page flyer issued as he attempted to gather some financing for his plane's development. In a moment of brutal honesty, it does point out, “Because of certain minor details not yet worked out to Mr. Maiwurm's critical satisfaction, and because of the lack of a modern motor, no effort has yet been made to test the Flyworm in the air, but the results to date have absolutely convinced Mr. Maiwurm and his associates that when all the minor details have been completed the new air ship will take to the air.” The pamphlet comes with a typescript letter and two original postcards. Priced at $350.

Roswell Marsh was a man ahead of his time. Circa 1872 this Ohio native published this broadside headed Hemp-Cannabis-Sativa. It promoted increased production of cannabis, a message that has been taken to heart recently in several western states. However, Marsh was interested in more than having a good time. Hemp was needed for cordage, making ropes, in greater demand in the 19th century for use on ships. Item 19. $100.

Modern technology has protected us from the risk earlier generations faced of falling out of windows, but T. P. Tuite provided an interim solution back in 1896 in the this four-page pamphlet: Fatal Fall from a Fire-Escape While Engaged in Taking in Clothes... Those were the days when women living in tenements hung out of windows and over fire-escapes to reach the clothesline (remember those?) to hang the wash. Tuite has kindly shown us a few images of women falling out of windows just to make sure the message is understood. He offered some sort of “crane” that protected the lady of the house (men didn't do wash in 1896) from falling to her demise. Now let us all be thankful for the clothes dryer. Item 326. $35.

Item 88 is a 1917 employment brochure from J. C. Penney: Men Wanted. Penneys wanted only “men of sterling qualities,” none who drink, smoke, gamble, who lack initiative or are apathetic...” In other words, they wanted “the steel rails of business, which is but another name for MEN.” Only manly men need apply. “It wants men free from defects,” Penneys says, ignoring the fact that such creatures do not exist. $35.

There may be some unusual laws in Illinois, but who knew, as this booklet pronounces, Saving Life a Crime in Illinois. This was the work of James Armstrong, M.D., a self-righteous physician whom the State of Illinois determined to be a quack. For some incomprehensible reason, the Illinois Supreme Court ruled that Armstrong's Illinois Health University, which consisted of two rooms in a building with a “Furnished Rooms for Rent” sign in the window, was a diploma mill. The Supreme Court felt such things as not requiring class attendance were a sign that the school was sending incompetent men across the country to practice medicine. Dr. Armstrong sets the record state in this 56-page pamphlet from 1895. Item 287. $250.