Americana Including an Extraordinary Mormon Collection from Michael Vinson 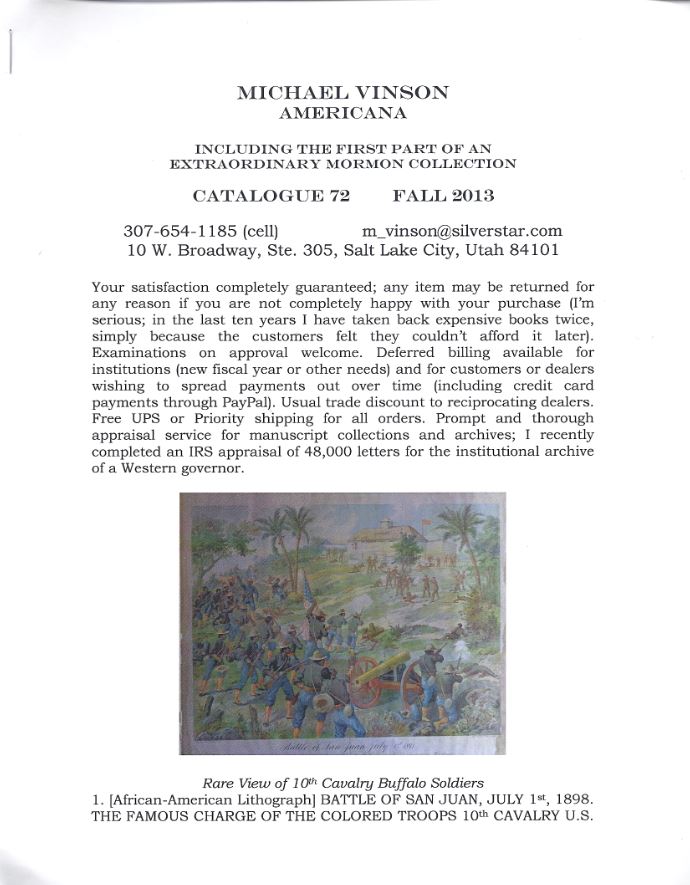 Americana with a focus on Mormon history.

Michael Vinson Americana has issued a catalogue of Americana Including the First Part of an Extraordinary Mormon Collection. The Salt Lake City bookseller offers a selection of fascinating items in the field of Americana, though it is the Mormon works that are truly spectacular. There are some very rare and important pieces from the early days of the Church of Jesus Christ of Latter Day Saints. Earlier this year, Vinson acquired most of what may have been the greatest privately held Mormon collection anywhere. It had been pieced together over a lifetime, dating back to the 1950s, by Salt Lake collector Barnard Silver, who decided it was time to let most of it go so that he could pursue other interests. As the title implies, we can expect to see more parts of the collection in future catalogues, though it is hard to imagine it getting much better than this. Here are a few of the items to be found in this selection.

Item 12 is W. H. Holmes' A New Map of Kansas, a Pike's Peak Gold Rush map. You may wonder when there was a gold rush in Kansas, or what Pike's Peak is doing in that state, but this was an 1859 map, from the time before there was a Colorado, and much of that state was still part of the Kansas Territory. Kansas was a mess in these days leading up to the Civil War, “Bleeding Kansas” as it came to be known. However, on its western edge, gold had been discovered in the front range of the Rocky Mountains. New towns were beginning to spring up, and the map shows such recent developments as Denver City (named for a Kansas governor) and nearby Auraria and Montana. The map also shows trails to the gold region, although you may arrive a little late to find a lode today. This map is very rare. Vinson was only able to locate one other copy, a variant, in collections. Priced at $12,500.

Item 35 is a collection of four letters from one of America's most remarkable generals, ranging from 1832-1843. The writer was General Zachary Taylor, the first two coming from the Back Hawk War in the upper Midwest, the latter two from the Seminole Wars in Florida. In one of his letters, Taylor asks permission to stop the practice of officers hiring ordinary soldiers to act as their “personal waiters and servants,” which he evidently felt an inappropriate way to treat soldiers. Taylor was not a well known person at this time, but would become an enormously popular figure as a result of his success in the Mexican War, in turn leading to his election as President in 1848. He took his same skills from his soldiering days to provide strong leadership in government during trying times, but unfortunately, he died only a little more than a year in office, to be succeeded by a series of weak presidents who bumbled their way to the disaster known as the Civil War. $22,500.

This next item straddles the line between Mormon collecting and standard Western Americana. Vinson describes it as “the black tulip of overland guide books.” Its title is The Latter-Day Saints' Emigrant Guide, by William Clayton, published in 1848. It was designed to guide Mormon travelers to Salt Lake, but it was used by California Gold Rush seekers and plagiarized by other guides because it was superior to most. Clayton had made the trip from Council Bluffs, the guide's starting point, to Salt Lake in 1847. He was one of the pioneers who helped to lay out Salt Lake City. Item 9. $125,000.

The Mormons were chased from place to place in the pre-Salt Lake days by hostile neighbors. By 1846, prophet Joseph Smith had been murdered and the Mormons faced attacks by their neighbors in Nauvoo, Illinois. It was determined they must go, and this time where there would be no neighbors to harass them. So they chose the desolate, unpopulated (except for Indians) area around Salt Lake. Item 22 is A Circular of the High Council to the Members of the Church of Jesus Christ of Latter Day Saints... a folio broadside published from Nauvoo in 1846. It was the first published announcement of the Mormon plan to establish a settlement in the Great Basin on the other side of the Rocky Mountains. Here the Church announced that they were sending a group of pioneers to stake out a new settlement for the community. Vinson believes the broadside may have been intended to assure hostile neighbors they would leave soon, thereby convincing them to let the Mormons alone a little longer. However, extreme harassment continued and they were forced to leave in the middle of winter. $27,500.