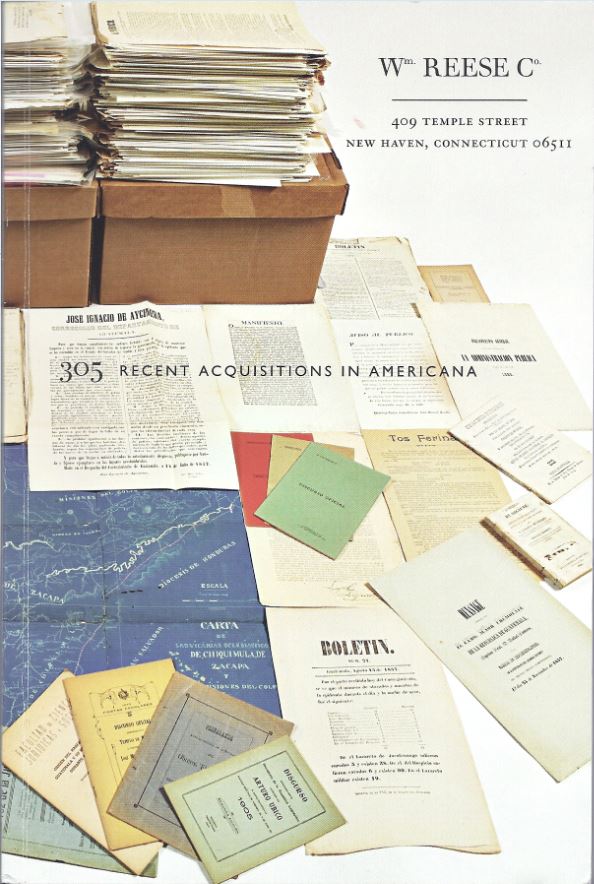 The William Reese Company has added to their long line of catalogues with 305 Recent Acquisitions in Americana. The items are within Reese's primary specialty – Americana – but it is all new material, not listed in any previous catalogues. As to be expected with Reese, this is important material, mostly from the 18th and 19th centuries. Many items were the work of notable Americans, such as Jefferson's Notes on the State of Virginia, or Franklin's famous almanacs. Others come from forgotten people describing memorable events, such as Civil War soldiers' letters back home from the battlefield. The participants may now be gone, but American history is still alive and well in this latest William Reese catalogue. Here are a few representatives of what is offered.

From the more things change the more they remain the same department, we start with The History of Pithole, by “Crocus” (Charles C. Leonard), published in 1867. Pithole was an oil boomtown in Pennsylvania, part of America's first oil boom. Located in northwestern Pennsylvania, where oil was first discovered in 1859, the first gusher near Pithole was discovered in early 1865. People flocked to the newly created town, it reaching a population of 20,000 by year's end. Reflecting the transient nature of many residents, there were 54 hotels, the third largest post office in Pennsylvania, a huge theater, newspaper, churches, and, naturally, brothels. However, a financial panic and several major fires struck the town. A year later, population declined to 2,000. The oil wells moved on, and by 1870, the census showed just 237 remained. A few years later, the community was unincorporated, and today there is no one left except for guides at a historic visitors' center. This book tells of the town while still in its better days, including information about the oil companies and wells operating in the community. This copy has been inscribed by “Crocus.” Item 113. Priced at $2,500.

Item 116 takes us back to one of the saddest moments in American history: Official Arrangements at Washington for the Funeral Solemnities of the Late Abraham Lincoln, President... Dated April 17, 1865, this official program issued by the War Department outlines the procession that brought Lincoln's body from the White House to the Capitol. There was an escort representing all branches of the military, along with numerous dignitaries, family members, representatives of various organizations, and finally, room for private citizens. This all happened almost 150 years ago, and no one on earth today was even close to having been alive at the time this tragedy unfolded, and yet somehow it is hard to read about it without feeling great sadness. Lincoln was a remarkable man. $6,000.

Item 9 is a broadside depicting Illustrations of the American Anti-Slavery Almanac for 1840. The abolition movement was fairly quiet through most of America's first four decades, but rapidly began to gain steam in the 1830s. The American Anti-Slavery Society, which produced the underlying almanac, was formed in 1834 by William Lloyd Garrison and Arthur Tappan, and the first anti-slavery candidate for President ran in 1840. This broadside contains 14 woodcuts depicting the horrors of slavery, such as a mother and child being separated at a slave auction, slaves chained together at work, being chased by dogs, and subjected to various other forms of physical abuse. $2,000.

Here is a book with more portraits, though of actual people rather than representatives of a type: Defenders and Offenders, published in 1888. It includes 210 chromolithographed portraits, some ten to a page, others four. Biographical sketches accompany the portraits. Two hundred of the portraits are of offenders, various criminals including murderers, con artists, counterfeiters, western robbers, burglars, pickpockets, and a woman convicted of selling obscene pictures. The other ten portraits are of good guys, police officers who protected the public from this nefarious lot. Item 62. $1,850.